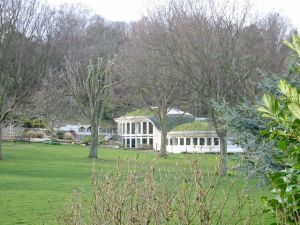 Hidden behind the engineered landscape of the Eastern docks a narrow lane with weathered concrete fence posts leads us up to the white cliffs of Dover and beyond. Evenly spaced small boats keep watch for what? Illegal immigrants? The path leads down to St. Margarets and the enchanting Pines Gardens – the Poetry Path, the Catalan Calyx roofs topped with turf. On to cream teas in the Bluebird Café and a hobble into Deal. 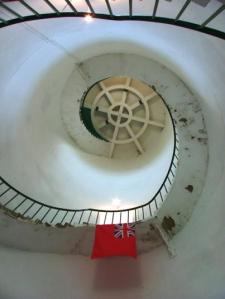 Wide open skies, deserted sandy beaches and wind. Beautiful home for two days  – Gig House. Forced to do our re-cycling homework. Families of seals dreaming on the beach and kite surfers riding the waves. Best bacon butty ever and vertiginous climb up the Happisborough Lighthouse. 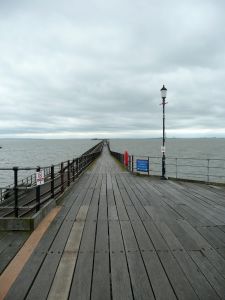 Walk along damp shingle beaches to the vintage arcades of Southend. A walk on the mile long pier is irresistible, as is the mini-train back, clanking over the weather worn boards. Kingsnorth lowers in the distance and then on to the fresh cockles of Leigh On Sea. 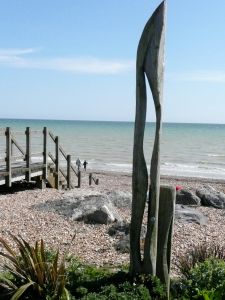 Beautiful wooden houses overlooking the lagoon, each equipped with canoes and such. On the western side of genteel Worthing, a sculpture park. My face turned to the midday sun and a headwind, turns an unexpected pink. 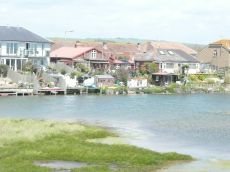 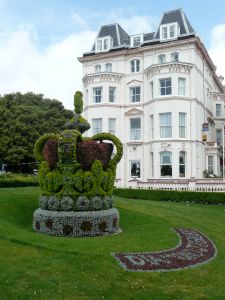 Empty high speed train tips me into the serenity of The Leas on a bright morning. Steep paths from the lush green sward and majestic houses to the hard concrete walkway that will lead me to Hythe.

A half expected setback when I see the military red flag at Hythe, forcing me into a 4 mile walk along the busy road to rejoin the coast at Dymchurch Redoubt.Surprise of a Victorian watertower, children playing in the garden, marking the end of my walk and the luck of the last single track steam train of the day puffing through Romney Marshes back to Hythe. 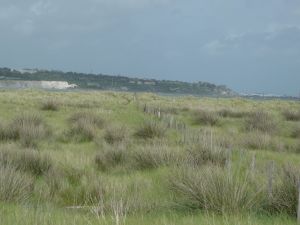 After headwinds of my last walk, forecasts of 50 mph winds lend weight to a decision to walk anti-clockwise. Walking out of old-fashioned Deal feeling smug, the strong wind behind me blows me like a rag doll alongside the billiard table turf of the royal golf course. Sandwich Bay, pristine and deserted offers up a tantalising footpath through a nature reserve, which swallows me up and leads me to the whipping muddy waters of an impassable estuary. Three miles back against the wind, feet aching, I trudge into “historic” Sandwich, my Noah’s Ark – Pegwell Bay will have to wait. 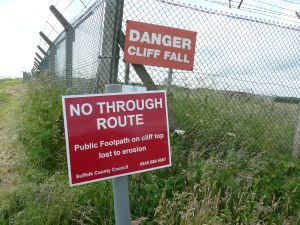 Just north of Lowestoft a deserted nudist beach, quickly turns into a concrete path. Low boom of the waves slapping against the sea defences makes me spin round – is there somebody behind me? But no I am very much alone and soon a familiar sight challenges me – I decide to walk on. 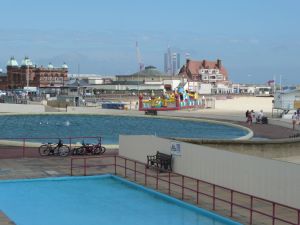 Reaching family run Gorleston I turn to follow the river up to Great Yarmouth passing industrial docklands and occasional glimpses of a previous era.
The sun comes out to greet me as I wander through the plastic glories of Yarmouth market and the neat flower beds and statues in the courtyard of the Fisherman’s Hospital – an 18th century care home for fishermen over the age of 60 and their wives. 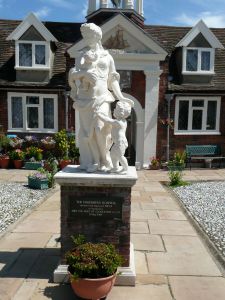 Following directions from a jolly Pole I start walking through the dunes to Caister-on-Sea entranced by the bird song and the surreal vision of a No. 3 double-decker bus a long way from Westminster. 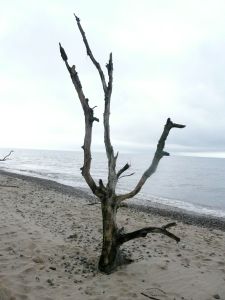 Leaving the Jubilee bunting of genteel Southwold we head northwards ignoring the dark purple clouds massing behind us. Caught up in the sight of the stark dead trees on the beach we miss the first drops of rain, which quickly become a heavy downpour. No shelter in sight I carry my rucksack close to my body in an attempt to protect my camera and iphone, feeling like a refugee carrying a child away from danger. I back up under a dead tree, bent double under a low branch, like a cow sheltering from the storm.
Taking tide advice from a lone fisherman we leave the coast for
overgrown trails through muddy fields and dripping woods – now so wet it didn’t matter. A brief hole-up for a cup of tea and a couple of deviations later we hit the coast again and squelch our way into Lowestoft under Triton’s watchful gaze. 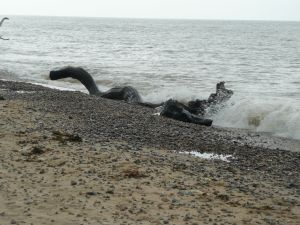 Heading out in the unusual bright sunshine I stomp through the shingle for half an hour until the sea retreats to reveal damp firm sand perfect for walking. Looking out to sea I spy an animal and this time it’s not a seal, it’s a real labroador. Sizewell’s unearthly dome shimmers in the distance and getting closer I scuttle past not wanting to linger.

Head down I walk to my own rhythm, passing the grand, coloured houses of Thorpeness and soon Aldeburgh with its “fresh fish, anything fresher is still swimming”.
Strains of music reach me, or is it the wind? Tired and happy I stare at the words on the Scallop – “I hear those voices that will not be drowned”. Did I? 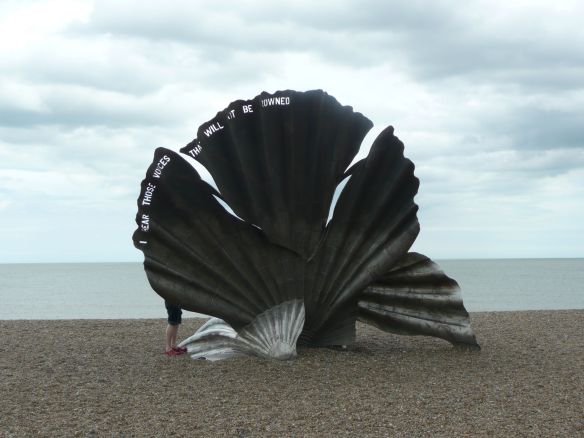 Finally out of Aldeburgh and a forest walk to Snape, complete with ceramic sculptures. Then along the road in the rain to welcoming tea and scones at the Maltings. Crossing boardwalks through marshlands and miltary camps of pig sheds, I come across what has to be a mispelt joke. From Butley to Woodbridge I am the only passenger on the bus. 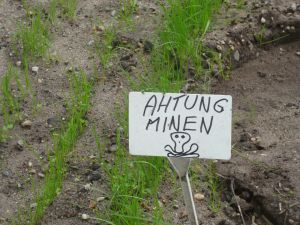