An early morning bus takes me back to Tollesbury where I push an envelope containing £10 through the door of the closed teashop. On the other side of a gate is a board with information about Tollesbury Wick Marshes, the first part of today’s walk. The sky is grey but some weak winter sunshine lights up the far side of the marina, and walking on for a few more miles I come across an area of dead trees not unlike the ones on Southwold beach: in the same way they lift their branches in a silent entreaty to the heavens.

A little later an information board points out the sight of the disused railway that was planned to take holidaymakers down to the pier, blown up as a security precaution during the second world war. 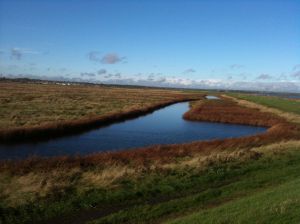 Leaving Tollesbury Wick Marshes I follow the coast passing Mill Point and on to Goldhanger. The weather has brightened and it is easy walking although hunger starts to become an issue – I must learn to be a bit more organized about provisions.

As the sun is setting I walk into Heybridge Basin and stop to talk to a man working on his boat shed, eager to fill me in on the local history. Knowing I had to get back to London that evening I was forced to cut him short and hobble to the pub on the front where I am lucky enough to catch a taxi to Maldon. After a pint in Maldon I catch the bus to Chelmsford and the train back to London.