Arriving late in the darkness of the Hampshire countryside I stumble around in the front garden of my B&B, trying to find the main entrance.

The concrete tower that rears up in front of me has a door which leads nowhere, so heading for the light to the left of the tower I find myself tapping tentatively on the big glass doors of what turns out to be the kitchen. Slightly startled, my host welcomes me in, leads me up to my room and on request provides me with an ice cold beer – wonderful! 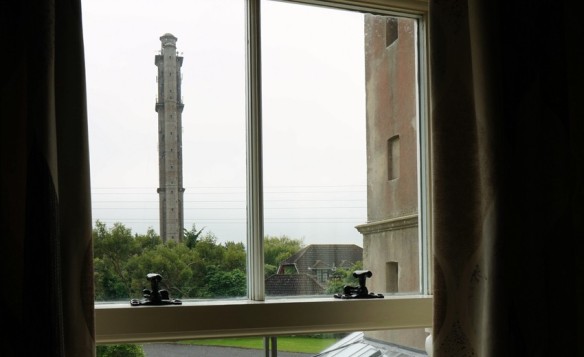 Waking early I cannot believe my eyes when I see another much higher tower rising out of the trees in front of my window and over breakfast I am told the intriguing story behind “Hampshire’s Finest Folly”. Both towers were conceived by Andrew Peterson (1813-1906), a retired barrister, who on his return to England from India decided to build the tower as a mausoleum for himself and his wife. In accordance with Indian tradition the plan was that he would occupy the top of the tower and his wife the bottom. Unfortunately, these grand plans were not to be, as English law prohibits any burial higher than four foot above the ground – he now lies in Sway village churchyard.

The two towers are also a testament to his belief in the value of cement based concrete as a building material and the doomed mausoleum remains the tallest non-reinforced concrete construction in the world. Here endeth the history lesson.

After a hearty breakfast using cutlery from the Raj somebody offers me a lift to Lymington which I very gratefully accept – there are no buses out here and taxis are expensive.

Soon I’m walking down the cobbled street which leads to the quay and turning right to walk past the Marina I find myself on a road which runs parallel to the coast but which eventually allows me back to walk by the water. The sky suddenly turns dark, and heavy drops of rain see me struggling into my waterproofs, worrying about my phone and camera. Five minutes later the sun comes out and I go through the same thing in reverse cursing british weather.

After a while the path opens up and I find myself walking through a magical landscape of beautiful lagoons. Fish puncture the surface of the still, crystal clear water. Creaky geese fly overhead and a startled bird flutters up in front me, hooting like a child on a penny whistle. 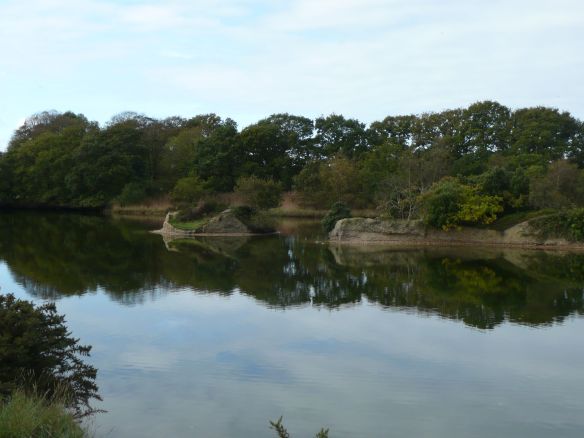 These are Keyhaven Marshes, an area which was an important source of salt in the MIddle Ages and later. I walk on a wide grassy path, content, it reminds me of the Essex estuaries only there are far more people around. Rounding a corner I’m surprised to see what looks like a dome ahead – surely you’re not allowed to camp here, I think, but as I get closer I see it is a sculpture of sorts and there is an information board which gives me its title – SHELTER – the artist Suzanne M  Winterling has incorporated a material called Aerogel into the struts of the structure – this is a luminous substance with the same properties as salt  – her reference to the previous importance of the area. 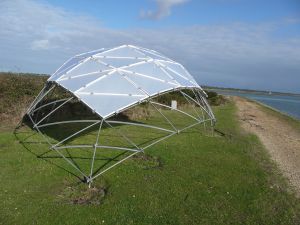 Walking on, past clusters of twitchers I walk past the village of Hurst, ignoring the signs to the castle out on the tip of the peninsula – I have a long walk today and not much time – until I find myself on shingle (thankfully not for very long). 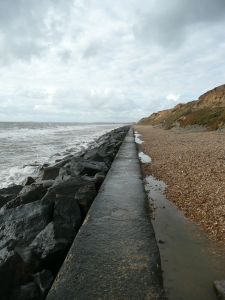 I choose the slippery sea wall to avoid the shingle and following directions up the stairs, through some pretty beach huts, I’m up on the cliff in a stiff wind keeping very close to the fence on my right – the path is littered with signposts with dire warnings of crumbly cliffs.

Eventually the path widens and after cutting through a private holiday camp I follow the path back down to the beach where I sit and watch a lone surfer struggling to paddle his board out to sea to catch a wave – he rides the wave for 3/4 seconds – all that effort! The path now leads me upwards through some sleek beech trees and out to the front of a very beautiful stately home. I can see table and parasols in the gardens and I’m tempted to go and have a cup of tea but time is of essence – hmmm……..I’m supposed to be walking to avoid stress….. 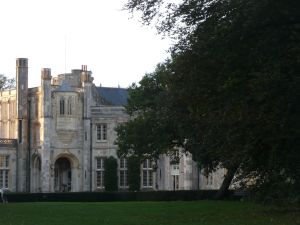 I walk through the woods that now cut me off from the sea and stop to take a picture or two – here’s one of a bench, dedicated as they often are, to someone who loved to spend a lot of time in this spot. As I read the inscription I wonder when, if at all, I will get to that stage where I find myself a regular haunt to collect my thoughts and find a bit of peace – I never really feel settled enough. 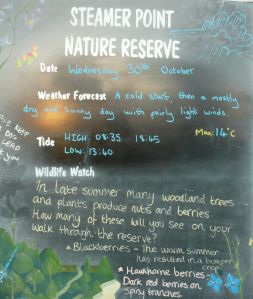 Walking on I come to some large metal gates and I realise I have been walking through an area known as Steamer Point Nature Reserve and looking at the map I see I am not far from Christchurch. Down by the sea again I walk past the usual faceless rows of holiday chalets, my indifference only tempered by the sight of someone being considerate enough to construct the decking around the trunk of an existing tree.

I am hungry now and in need of a cold beer, but the pub at Little Haven looks unsavoury, so I catch a bus into Christchurch and get the train home. I am now in Dorset!