On my last walk I sprained my ankle and a couple of weeks later managed to break my  toe by giving the wall of the swimming pool a vigorous breast stroke kick. Since then I have become very wary of anyone or anything that comes near my feet. On trains and buses and in cinemas I tuck them carefully away, I cannot afford any more breakages. So it is with some trepidation that I approach this walk, support bandage around my ankle and all manner of protective plasters in my rucksack should my toe start playing up.

I spend the night in East Knighton in a pub which I’m told was Lawrence of Arabia’s local when he was stationed at nearby Bovington – I even get to see his favourite seat by the fire which unfortunately is occupied. The following morning I get a taxi to West Chaldon where the map is showing some sort of a path to take me down to a point on the coast, more or less where I finished last time. And indeed there is a muddy, potholed track which leads me onto the South West Coast Path and puffing and panting up the mighty White Nothe. Unlike last time the weather is kind  and it promises to be so all day.

Up over the top of White Nothe and down again, I follow the path through a patch of woodland, past a path leading to Burning Cliff, which is blocked off due to subsidence and then down to Ringstead Bay.

It is quite windy and the sun is hot on my left cheek – with the focus on foot and toe problems I had forgotten to bring sun cream and I have no hat. I know I will finish the walk with a cherry red face. 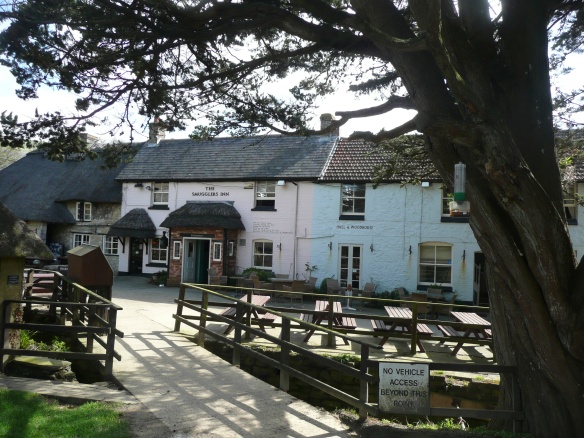 After a while the path leads down to Osmington Mills and a pretty pub called the Smugglers Inn, but it’s too early to stop for lunch. Dating back to the 13th century, the Smuggler’s Inn is known to have been the home of the leader of the most notorious gang of smugglers in the area during the 18th and19th centuries, Emmanuel Charles. An importer of brandy so foul, even the locals refused his offerings.

Coming out of the settlement I lose the path and stop to ask a man sitting with his car door open, in the process of putting on his walking boots. He tells me he does a lot of walking in the area but cannot tell me where to pick up the coastal path – hmmm………..two minutes later, after a brief stop to watch three guinea fowl delicately crossing the road in front of me, I find the path clearly marked off to the left.

Walking on, the path now widens out onto a broad sweep of grass and I stop to watch a group of youngsters trying their luck on climbing frames and zip wires, they are all very brave.

A few gentle ups and downs later I reach Redcliff Point and take a look back to where I have come from. 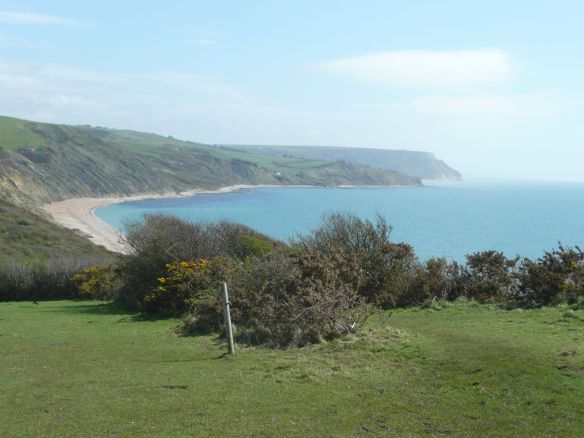 Up until now, when walking on narrow paths, I have been very much focussed on my feet, looking out for holes my foot may disappear into or loose stones I may stub my toe against, but as the path widens out I allow myself to raise my head and look around – and to my surprise I see a massive white horse and rider carved into the limestone of the flank of the hill. 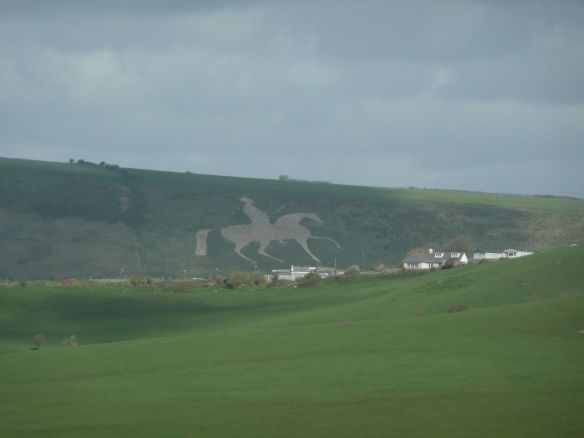 This, I find out later is the Osmington White Horse, sculpted in 1808 to represent King George III, who regularly visited Weymouth, riding on his horse.

From now on the path is well populated with people airing their dogs and couples out for a stroll in the sunshine. At the edge of Bowleaze Cove I walk past a 30’s built holiday hotel painted an unusual blue and white and named rather optimistically The Riviera.

Further on I find myself walking down a narrow alley round the back of a small fairground.  I then realise that to get to the beach I will have to retrace my steps so this is what I do – clambering over a concrete wall down onto the pebbles. A minute later I also realise that to continue walking on the beach I will have to cross two quite deep fast running rivulets of the River Jordan (yes it’s really called that!). A small boy and his father are dithering on the other side, weighing up how difficult it may be to cross without getting wet. Eyeing up the largest stones to balance on I make my way gingerly across the water and get to the other side. Encouraged, the little boy is excitedly trying to persuade his father to let him have a go – Dad is not keen and drags the disappointed boy away – what a pity I think – the worst that could have happened was a pair of wet shoes.

I walk for a while on the shingle but by now my little toe is really hurting, so I climb up onto the rather boring promenade which will take me into Weymouth. 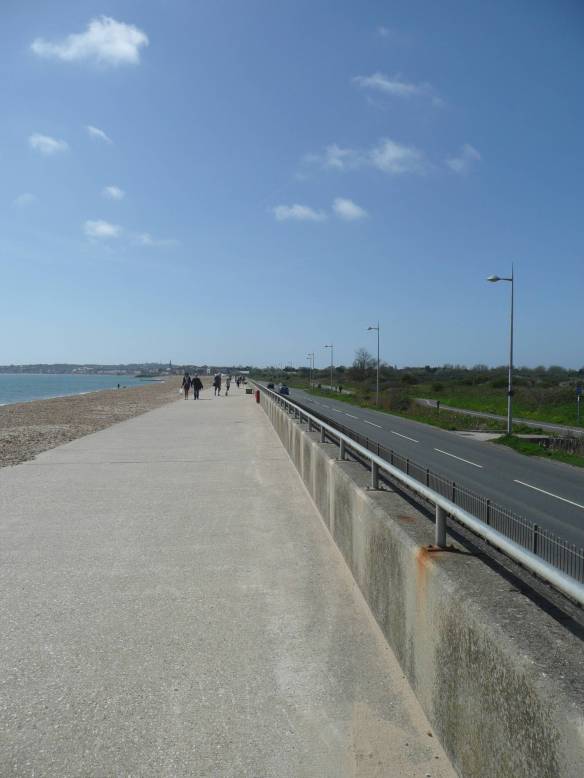 The line of immaculate Victorian beach huts and pretty pastel chalets are still all locked up – the sun is shining but there is still a chill in the air.

Finally I limp into Weymouth desperate to sit down and take off my boot and have a cup of tea. To add to my misery the house numbers on the Esplanade are not logical and it takes me a good 15 minutes of walking round in circles before I reach my B&B.

It is still quite early in the day so after a bit of a rest and a toe slathering of pain relief cream I decide to walk a little further before calling it a day. I walk down the promenade, past the colourful clock tower and round the corner to the old harbour. I spy a sign for a ferry and people waiting. 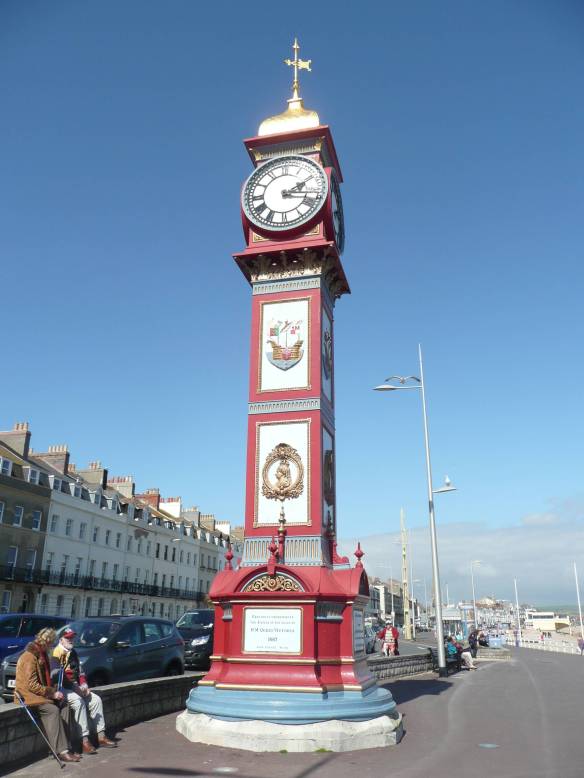 The ferry is a rowing boat and takes about 3 minutes, a tidy little business and good exercise for the owner.

On the other side I follow signs for Nothe Fort, the gardens are lovely with great views of the coast and off to the right the hulk of Portland in the distance. I am not tempted to go in and see the military displays but I nearly buy an ice-cream before realising that it is still Lent – no puddings, no pastries, no cheese, no wine……….sigh.

The acorn symbol of the South West Coastal Path is clearly signposted but at one point I am diverted inland to skirt an industrial complex. I walk through residential streets for a while before coming back to the path that leads to Portland Harbour – a deep water harbour formed by the building of a breakwater in the mid 19th century. Six million tons of Portland stone were needed to build the defence wall, quarried by convicts otherwise bound for the colonies. I reach the road bridge that connects the island with the main land and take a picture.

As the name suggests the Isle of Portland is an island and I therefore do not need to walk around it. Nevertheless I decide to catch a bus to have a look around as it is still not really time to call it a day. The bus literally does go all around the houses, and there are lots of them – dingy, dull brown, ugly. The place feels run down in the same way some of the South Wales mining towns do but I realise that I have only seen a small part of the island and I am notoriously quick to judge…………..my toe still hurts.