This gorgeous lamb seems interested in my progress as I puff and pant up the steep hill to St. Catherine’s Chapel in Abbotsbury.

It is Sunday, very quiet and quite breezy – I zip up my jacket.

After taking a few pictures I move down the other side of the hill and not finding a direct path, I head in the general direction of the coast. At the bottom of the huge field I find myself on a grassy track, which eventually leads me to the shingle of the northern tip of Chesil Beach.

Just before I hit the beach I notice some wild flowers by the side of the track that look very familiar – I had bought a pot of these a few weeks ago, planted them in the garden and a day later they had lost all their flowers. Here, these same flowers were everywhere and looking extremely healthy. I can only surmise that they love sandy soil and not heavy London clay but then why didn’t it say so on the label?!

Head down, I begin the familiar shingle trudge hoping it’s not going to last too long – and it doesn’t YET. Just round the corner is a tea shop, a car park and a friendly National Trust man who tells me that there is a decent track most of the way to Seatown, although he does qualify it with “some places better than others”. Encouraged I start walking on the dirt road, past some pretty newly renovated coastguard cottages – to my left is the beach, a few fishermen are out. I realise I have no idea what kind of fish you can catch off this coast, if they weren’t so far away I would ask – next time. 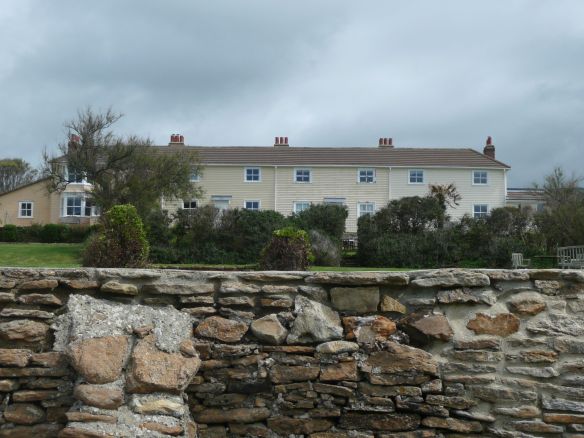 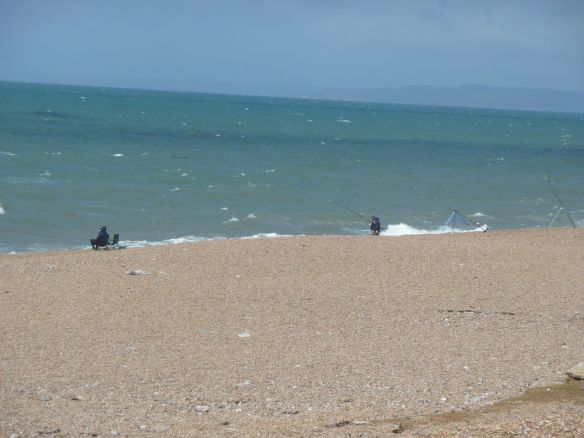 After a while the track starts to deteriorate and the walking gets harder. At West Bexington I stop to take a photo of someone’s mini Stonehenge, it makes me happy to think someone has taken the time to build it. 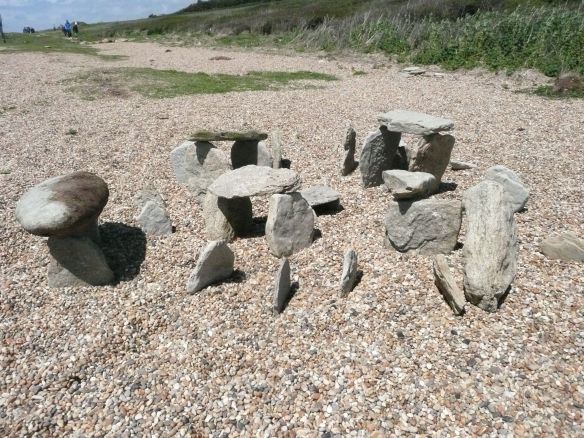 On I go and the shingle gets denser – this is Cogden Beach and I won’t forget it for a long time. It is now filed away with another shingle trudge in Norfolk which nearly killed me. There is really no path, there may have been at one time but the shingle has reclaimed it ….obviously….. 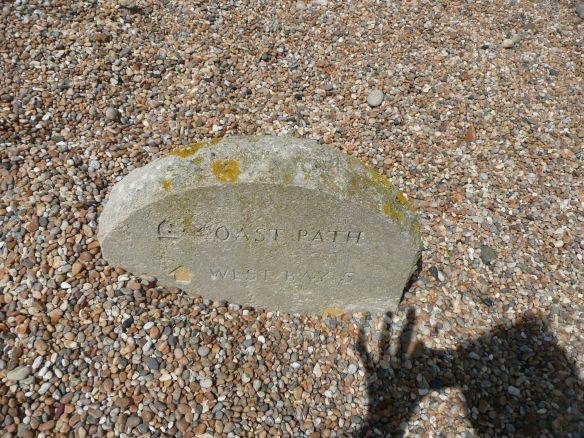 I meet a couple of walkers coming the other way, they do not have good news, but as it happens they are exaggerating. For another 20 minutes I crawl along with a very narrow field of vision and nearly miss a gate off to the right with grass on the other side! Through I go, my heart lifting with the joy of having firm ground under my feet.

This part of the path circles a couple of ponds and wet land called Burton Mere – there are irises and boardwalks.

Later on the path turns into firm grass and I’m walking closer to the coast. It is lunchtime and I am very hungry so when I round a corner and find myself looking down on a pretty little beach I decide to head for the cafe.

Half an hour later I am still standing in the queue only to be told when I finally get a chance to order that the soup may take another 30 minutes – it is a bank holiday weekend, very busy. Resigned to the wait I sink into my chair, reminding myself of the fact that I am here, in this lovely part of the country, doing what I love doing and not at work. All this positive thinking must have had an effect as 10 minutes later I’m tucking into the most delicious seafood soup with large hunks of homemade bread.

Satisfied, I walk along the beach and realise that I am now being diverted inland (not for the first time) – but it is only a short detour and I am soon back on a wide grassy path on the cliffs all the way to Burton Freshwater.

A small stream runs through the beach but further up there are some stones which allow me to cross it. Children are daring each other to slide down the bank – one of the girls nearly gets dragged in to the fast flowing stream.

From now on, the path hugs the coast, there are a few, quite steep ascents and descents and a couple of extremely ugly caravan sites. 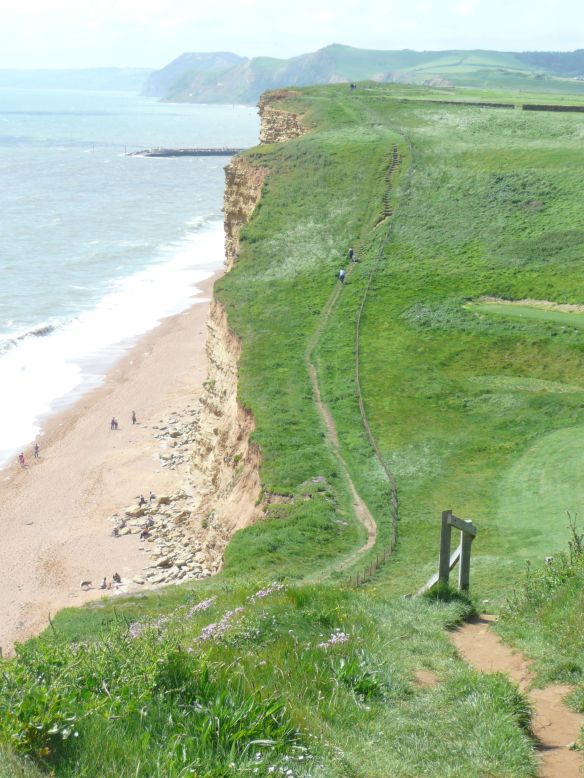 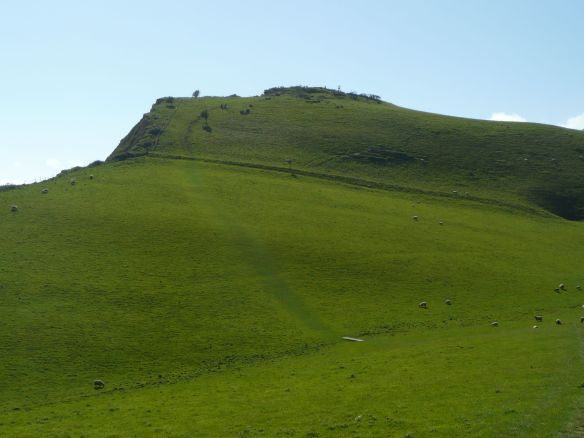 Eventually I reach the sprawl of West Bay, it’s actually prettier once you get down to the harbour but I don’t stay long as I need to get to Seatown early enough to get the bus back to Bridport where I will be staying the night.

It is still a beautiful day, I walk on, through Eype’s Mouth, then up a very steep slope and down the other side. My knees are complaining a little so I spend a little time drinking a cold beer outside the pub, watching people on the beach. It’s been a hard walk but a good day.