We start from the footbridge close to the Dylan Thomas Centre where I finished last time – dark clouds are massing but we may out-walk them. 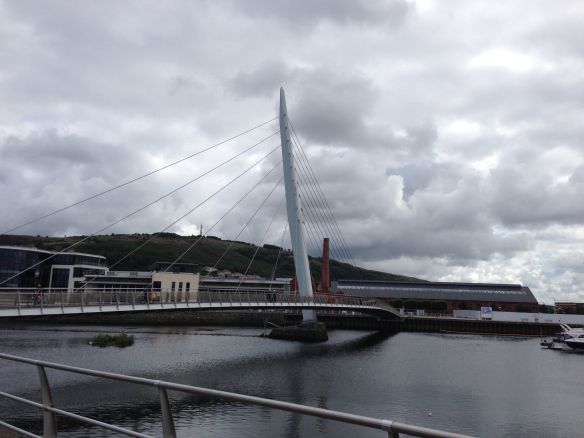 The footpath winds around the Marina past new dockland flats, looking just like new flats in any other re-developed dockland area in the country. Soon the path veers off into rough grass and on the other side a long stretch of sand, a lonesome tower at the end of the beach. We later discover there is a restaurant and bar at the top but we’ve no time for this today.

Half way along is an exotic looking building which turns out to be Swansea’s ecliptic observatory, where some of the first photographs were taken of the moon – bit difficult to see but the goddess Eciptia is mounted  on the glazed roof of the back tower. 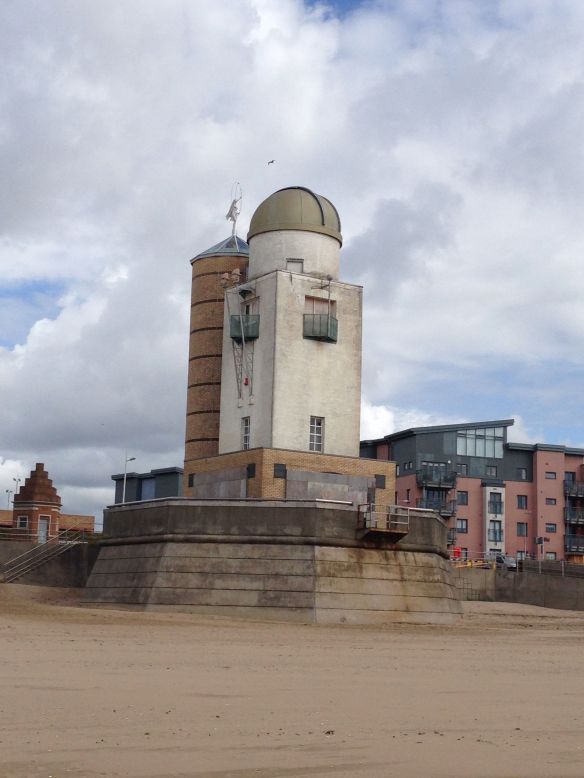 From here it’s quite a long walk on firm sand up to the university. I had no idea that Swansea had such long sandy beaches, although when I think about it we were often bussed down here from mid Wales as children on school trips – but it was always raining, so maybe we never got to the beach!

At one point we decide to leave the sand for the path which is equipped with a range of exercise machines. Every eight metres we are presented with a different contraption to strengthen and exercise a different part of the body – Damian goes for the thigh toner. 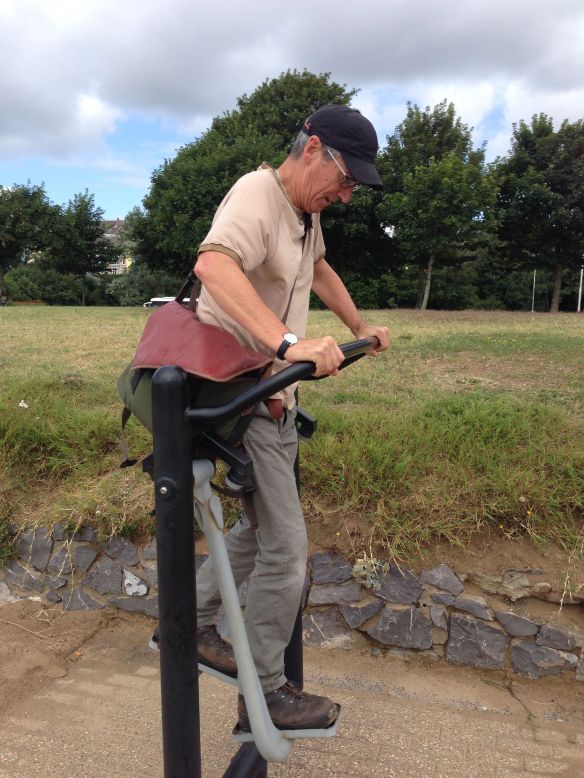 The concrete path runs along the side of the main road – we are warned of passing trains but do not see one. 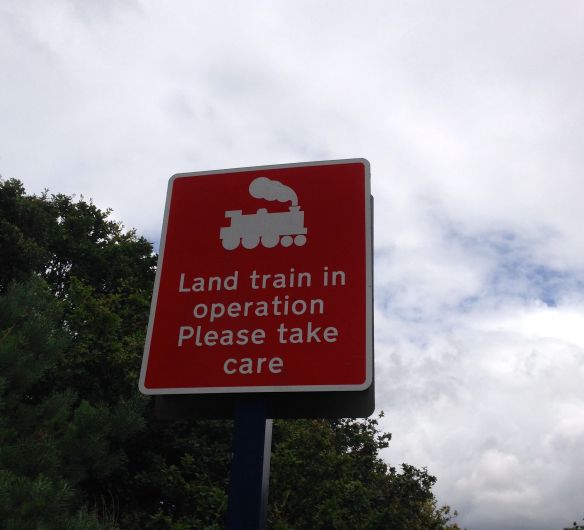 After a while we reach the outskirts of Mumbles, the pier in the distance, where we stop for a Welsh cake and a cup of tea. In the same way as I enjoy eating cream teas in Devon I also love eating Welsh cakes in Wales – it reminds me of my grandmother who used to  make them on a griddle over the open fire of an old fashioned kitchen range.

The pier itself has a few odd moments………

…………….but we walk to the end and spend some moments marvelling at the huge, shiny, bright orange lifeboat parked inside its station. On the far side of the pier is a rough little beach, the lighthouse on Mumbles Head in the distance.

From here the path leads upwards onto a road for a while and then back to the coast where an information board tells us that we are entering the Gower. In 1956 this was the very first Area to be designated as one of Outstanding Beauty. 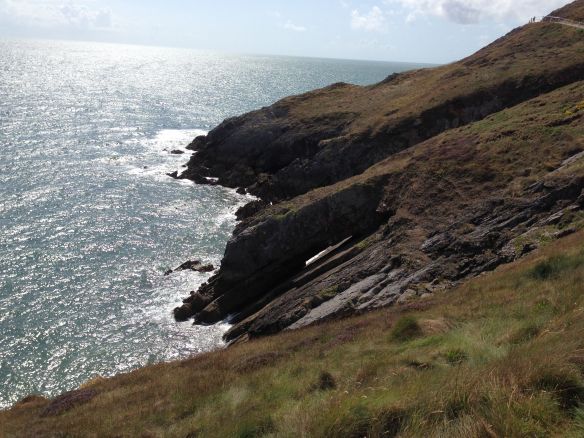 The path is well maintained and it’s easy to walk and stare at the same time – at one point we see the heads of two seals bobbing above the water.

The next beach is Langland Bay where a lot of people are out enjoying the intermittent afternoon sunshine. 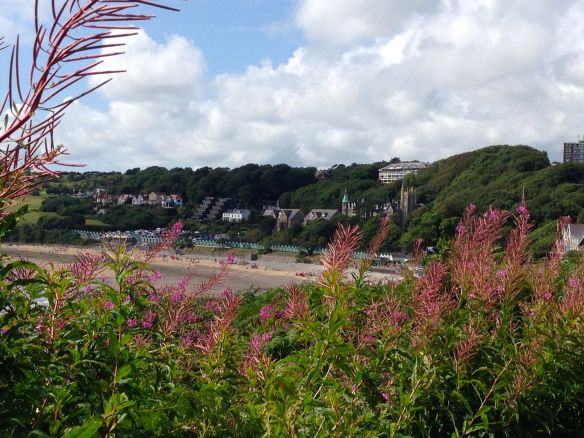 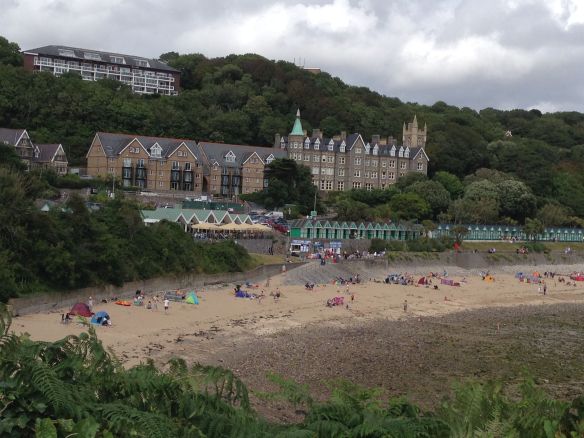 We ask a coastguard whether it would be possible to walk on the beach, round the headland to the next bay – but no. 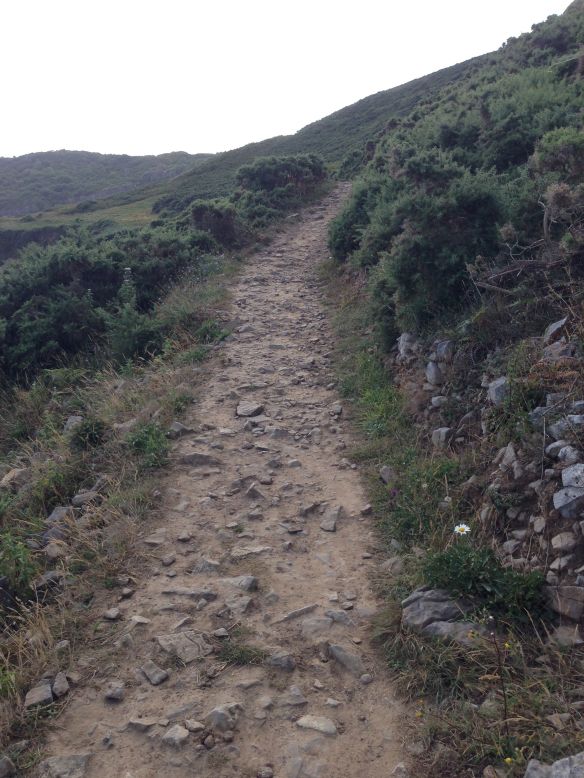 The path now gets rockier and I have to concentrate more on where I place my feet, I stop to get a photo of the rugged slabs of rock below.

Walking down into the delightful Pwlldu Bay we walk past a pretty creamy white calf cooling his heels in the stream.

We then get a bit lost, following signs that lead to dead ends, there are two lovely old farmhouses facing the beach but no-one to ask for directions. Eventually, we find the path that winds upwards through woodland to Pwlldu Head – the map shows the remains of a fort but we don’t find them. 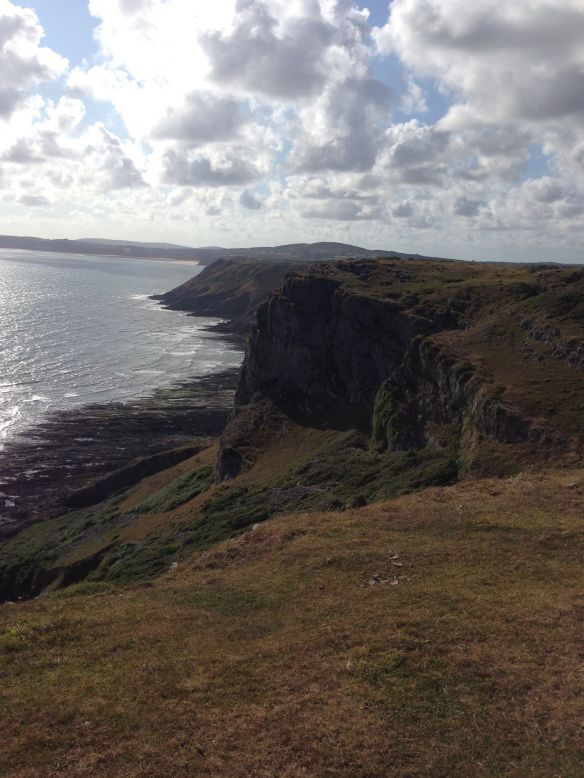 The last part of the walk is wild country, wide stretches of grassy cliff top – no-one around until we arrive at the road that leads to the outskirts of Southgate. We walk down into the village and find a pub where we drink to a wonderful day’s walking and then get a taxi back to Swansea (the buses are very few and far between on a Sunday).