My taxi drops me at Talland Bay where I finished yesterday and I head up the path which rises steeply up onto the cliffs. Both my boots and I are praying that it will not rain today as the cracks in the leather are now widening – it is misty at the moment but will clear up later I hope. After a couple of miles the path starts winding down and a pretty little village comes into view. This is Pollperro, which sounds Italian rather than Cornish and in fact it could be anywhere judging by the languages I hear spoken in its streets. This is the entrance to the cove where it looks like some lucky person is having a house built. 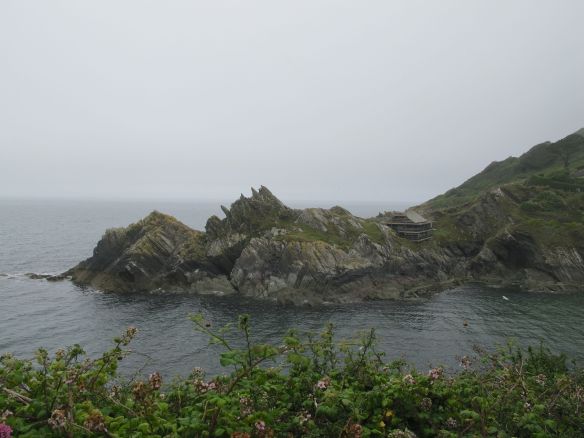 …..and here is the village… 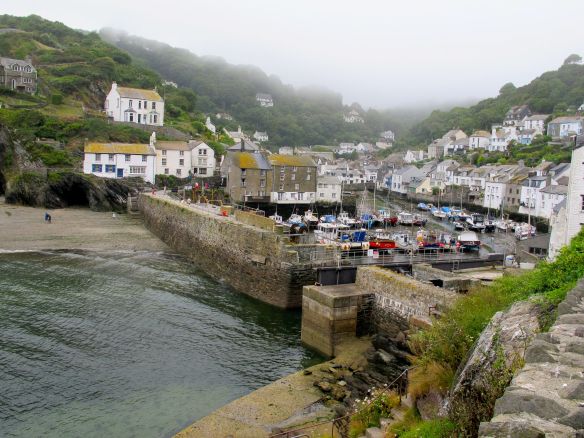 As I walk down the steep narrow street into the village it dawns on me that every other house I walk past is a summer let and closed and shuttered at that. The atmosphere is eerie, tourists laden with cameras stroll quietly, almost reverently, through the streets, necks craned to catch the sights, staring into the windows of small shops selling fudge and pasties – it’s all rather cheerless. I see no-one recognisable as a local.

As I peer round corners trying to spot signs for the path I am accosted by two cheery chaps from somewhere up north who ask first if I know where the path is, then whether I was intending to walk on it and lastly whether I was walking alone – their loud strongly accented voices bounce off the stone walls of the village square making heads turn in our direction. With as much politeness as I can muster I reply in the negative to the first question and make short work of the last two. “You know it’s pretty hard going from now on, don’t you?” one of them says – is he offering me a piggy back? I think. Anyway, I let them go, waiting for 10 minutes to make sure they are well ahead of me – I’m not generally Miss Misanthrope but I do like to walk on my own.

So, finding the path hidden behind a small house I climb back up onto the cliffs again and follow the path as it dips up, down and around the curves of the coast. 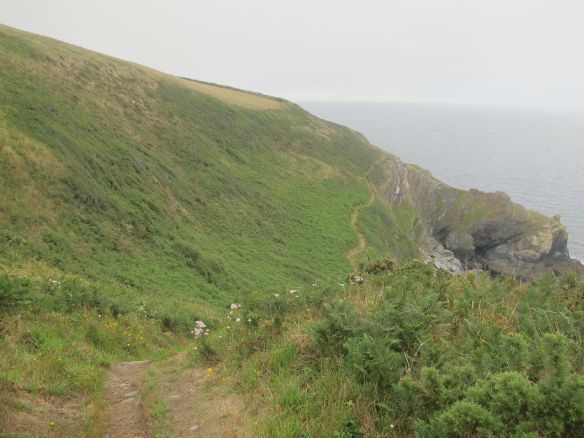 There are indeed some very steep climbs which leave me gasping but none as trying as those just after Durdle Door on that fateful day when I twisted my ankle.

At one point I walk past what looks like a chimney from far away but as I get closer I realise it has no recognisable features – no hole at the top, no windows, no plaque. I have since looked it up and discovered that it was used as a navigation aid for sailors (and smugglers no doubt as by the mid eighteenth century 50-60% of all alcohol consumed had been illegally brought in by ship via the Devonshire and Cornish coast.)

Up until this point the path has been quite well marked but here I am faced with a choice of down or up. I decide to take what looks like the easy option (usually not the best idea) but after 10 minutes walking it peters out into grass and stone and I can see no way forward. Turning around I see a woman of my age and her daughter stopped and hesitating behind me and I realise that they probably thought I knew the way. We stop to talk – they are German and the mother looks exhausted. Her daughter on the other hand is bright as a button and sets the pace back to the fork and on up into the craggy stones. I follow, keeping a respectable distance, but have to keep stopping as Mutter seems to be having trouble keeping up.

Round the next bend I am treated to the most wonderful view of Lantivet Bay, which from up here looks like a tropical beach.

It is now very hot and I am sorely tempted to go for a swim despite the thought of the long heave back up to the path. As I stand deliberating a man and his family squeeze past me and ask whether I’m thinking of going down to the beach. I tell them why I am in two minds but he manages to persuade me and 10 minutes later I am being tossed around in what turns out to be quite chilly water on what also turns out to be quite a stoney beach – how deceptive appearances can be. Despite these slight disappointments the swim is  invigorating and I give myself 15 minutes to dry off and enjoy the sun – I also make a friend.

Back up on the cliff top it doesn’t take long before I see signs of civilisation – the outskirts of Polruan – what a view the people who own this house have.

Walking down into the village I suddenly become aware of a rustling in the bushes to the left of me – a rabbit is sat there calmy nibbling away at the grass. It looks a little battered and I suppose it must be poorly as it makes no attempt to run away…….do we still have rabbits with myxomatosis?

Anyway, I leave it alone and continue down into the village where I can get a ferry over the river to Fowey.

Polruan feels like an authentic Cornish town, it has a working dock and solid buildings – there are also a lot more Cornish accents to be heard. I pop into the local pub for a swift half while waiting for the ferry and am tempted to ask the publican what type of steroids he was using for his window boxes.

The ferry arrives and as we leave to cross the river we pass a beautiful wooden sailing ship.

Halfway across, another traditional looking sailing boat crosses our path – someone is suspended from the front mast. Research tells me that this is a boat owned by a company that offers sailing holidays. It is called a pilot cutter and I think the mast extended from the front is called a bowsprit. The trip is from Brixham to Fowey and is open to beginners…..I wonder.

I check into a pub in the harbour and later eat the best scallops I have ever tasted – a fitting end to three days walking.