As is so often the case the coast path has crumbled at Polkerris so I head out of town on a narrow road with no pavements. Fortunately I soon discover a footpath sign peeping up above the hedge and a stile which I cross over into rolling fields. The stile is marked with a Celtic cross, a sign used for the “Saints Way”, a 27 mile path from Padstow to Fowey. From the top of the field I have a great view all the way to Par Sands but after a while I lose sight of the markers and find myself heading down in the general direction of Par but coming up against barbed wire fences. 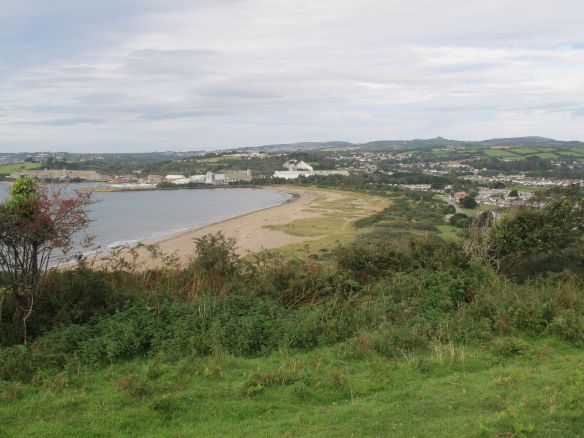 After the third twirl around the green I get fed up and start thinking about climbing the fence, but it is pretty high. Suddenly I spy a stretch of wire that has been pushed down – someone who has obviously been in the same dilemma as me. Hoora! I climb over easily and back onto the path.

In the car park at Par Sands, quite a few dogs are milling around barking excitedly -impatient to get onto the beach. This is one of the beaches that is not a hot tourist destination (the next photo tells you why) so they are allowed to run free.  One beautiful greyhound is speeding over the wet sand in all directions chasing flying geese! 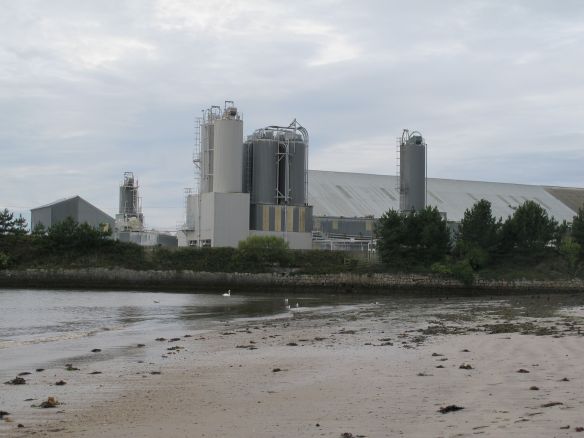 At the end of the beach and in front of the industrial buildings is the river, which I cannot cross, so I am led away off to the right, through some parkland and into the town. At one point a path leads off to the left and I see three swans gliding gently by. When they see me they change direction and move towards the slipway, which makes me think someone must be feeding them. I was a regular feeder of swans as a child – we had a lake in the town I grew up in – but the story goes that one day the swan not only snapped up the piece of stale bread I was so trustingly offering but also a bit of my finger. I cannot remember the incident myself and now there’s no-one to ask. Isn’t that always the way?.

Turning left through the town I walk past the back of the industrial complex at the end of the beach – I am told it is a China Clay works and just before a tunnel is a sign pointing off left to Carlyon.

The lane is narrow, muddy and garnished with piles of dog poo. I walk past silent derelict buildings telling of past glories – it is slightly eerie and I am very pleased when I reach the water again, coming out in front of a timeworn slipway that looks like a beached whale.

At this point I turn right and walk along the edge of a golf course for a looooong time.

At one point I pass a lone fisherman lost in his thoughts ………..

……..as I am too but at one point I look up and on the horizon I think I see a pyramid! I am to see quite a few of these on my walk today and tomorrow – they are apparently Cornwall’s equivalent of slag heaps, not coal waste but the result of china clay excavations. 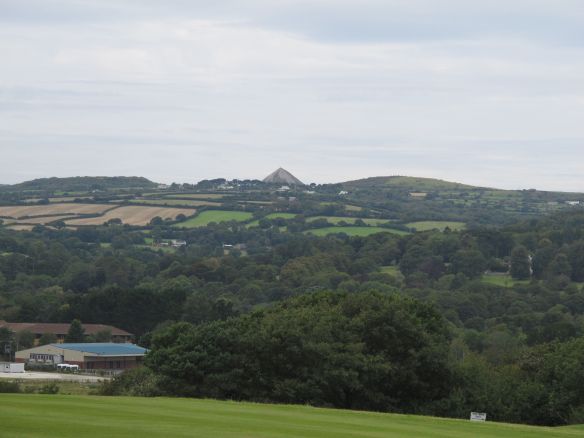 Eventually I reach what must be Carlyon Bay, a long stretch of sand now due for development. The bay used to be the site of the Cornwall Coliseum Building, which during the 50’s, 60’s and 70’s was a popular venue for concerts, bringing in many of the leading musicians of the time including Procol Harum, Eric Clapton, Black Sabbath and Simple Minds. What a great place for a concert venue – I believe the new plan is to strengthen the sea defences and build holiday lets. Shame….. 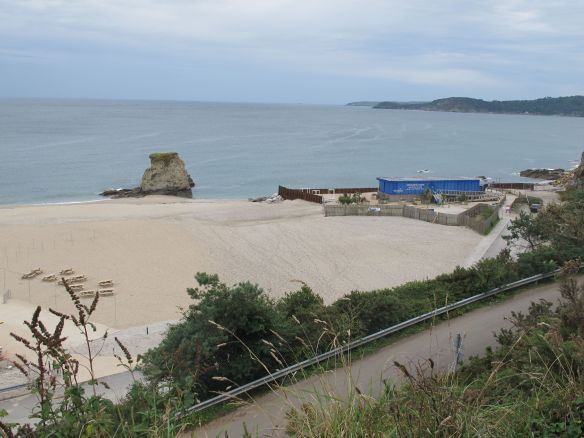 The path now winds along the top of the cliffs, past a lookout station and then down into Charlestown where I will be staying tonight.

Charlestown has a beautiful harbour and some very pretty houses. There are three tall ships in the harbour and quite a lot of German tourists. 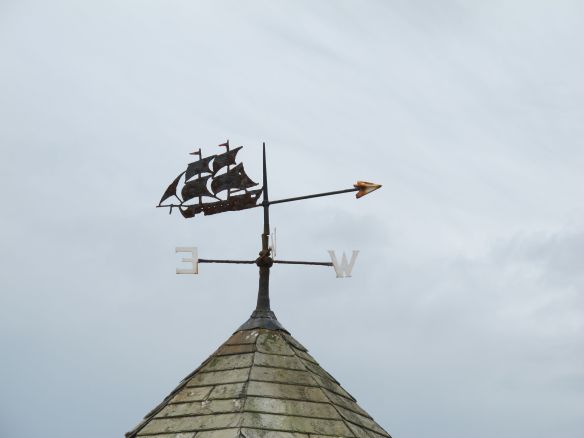 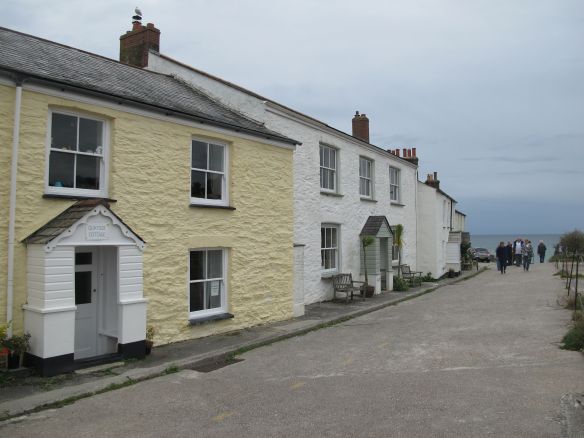 I check into my hotel, unload half of the contents of my rucksack and treat myself to a cream tea. I then head on up the path and past the ruins of a gun battery, which I don’t stop to investigate.

Below me is Duporth Beach which is one of the UK’s two thousand private beaches. Some of these allow public access as long as you’re not planning a rave, but some definitely do not. Personally I hate the thought of people owning a beach but as always money talks and although there were rumblings in 2006 about strengthening the “right to roam” I haven’t been able to find any information about any other initiatives to prevent wealthy landowners from banning the great unwashed from their beaches. 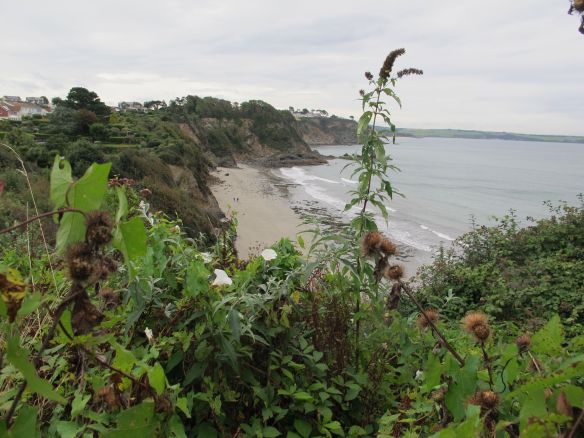 Up on high are bushes of lace cap hydrangea – a wonderful shade of blue.

….and then the path dips down some stairs onto another beach where some school children have just finished kayaking. I walk behind them up the road at the other end of the  beach, listening to their excited high pitched voices – I am tired now but their chatter revives my spirits. 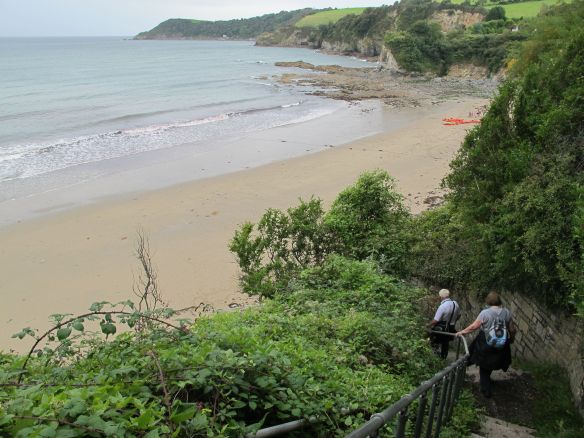 ………..and on I go, some steep climbs and toe stubbing descents. 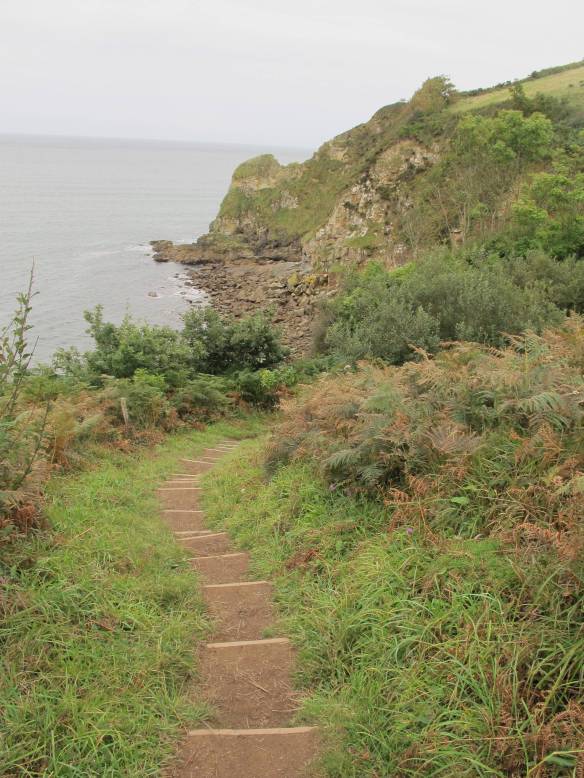 At one point I climb over a stile into a stretch of woodland – an iron has been tied to one of the posts – why?

Scrambling up a slope in the forest these plants catch my eye as they look so much like a sweet little house plant that I have just discovered the name of – Pilea Peperomioides or Chinese money plant. Cuttings of these plants were brought from China to Norway by Agnar Espegren in 1906 and from there they spread throughout Scandinavia. A gift from a friend in London who didn’t know the name of the plant, I came across it in a flower shop in Copenhagen and the mystery was solved.

Eventually I arrive at Black Head, a promontory of land which was the site of an Iron Age fort and then I get a bit lost. My sense of direction leaves me for a while and I find myself heading up the track to the fort, then retracing my steps and taking a narrow path down the side of the cliff and finally realising where I had gone wrong.

Back on track I nearly tread on a lovely little caterpillar and then come across a huge mushroom. 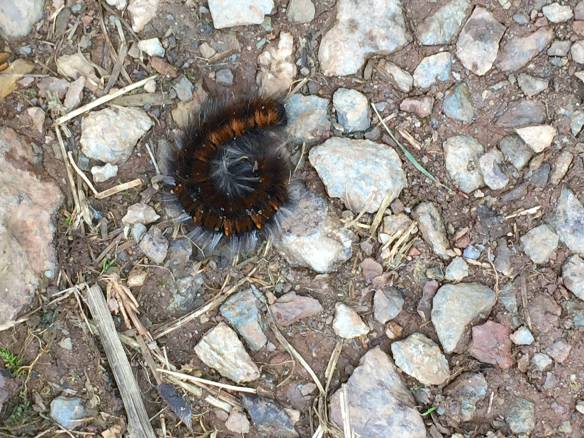 And not before time I stumble wearily down through some neat residential gardens and down into Pentewan which has more to offer than a massive spread of caravans. The village has a pond, a decent beach and a pub. it is only 4.30 but people are on holiday and allowed a few pints in the afternoon. The atmosphere is very congenial and I sink gratefully into a corner seat with a pint of Proper Job and wait for my taxi back to Charlestown.