The bus drops me off in Mousehole and it’s not a bad morning, “enough blue sky to make a sailor suit” as my mother used to say. I walk through very narrow winding streets, passing small granite cottages, all tightly clustered around the harbour. “The loveliest village in England” is how Dylan Thomas described it in 1930 and apart from more holiday lets I’m sure it hasn’t changed a lot since then.

On the edge of the village I pass this sign with two words that just should not appear in the same sentence – makes me feel a bit queasy.

After a coming to a stop at a few dead ends I eventually find the coast path which climbs very steeply up though a stretch of woodland – the earth is an African red.

and then it mysteriously changes colour and gets rocky, very rocky, twist your ankle rocky.

Progress is painfully slow as I head down to Lamorna Cove (such a romantic name) and I am very glad I have my walking pole. My map shows a nature reserve called Kemyel Crease which is a very apt name for a narrow deep rocky path with sheer drops to the sea.

I am relieved to reach Lamorna Cove, a pretty little hamlet apparently favoured by artists, craftsmen and writers since before the first World War – famous names include Augustus John and John Le Carré. Unfortunately, this is the only photo I took of the place – must have got distracted.

After Lamorna, the path continues to hug the very edge of the coast, causing me some concern in places. It was the Scottish mountains that introduced me to exposure (“how do you do….”) and I still get a little giddy and anxious when it happens. I also feel it is time for a rest and somewhere in my rucksack I know there is a soggy sandwich. 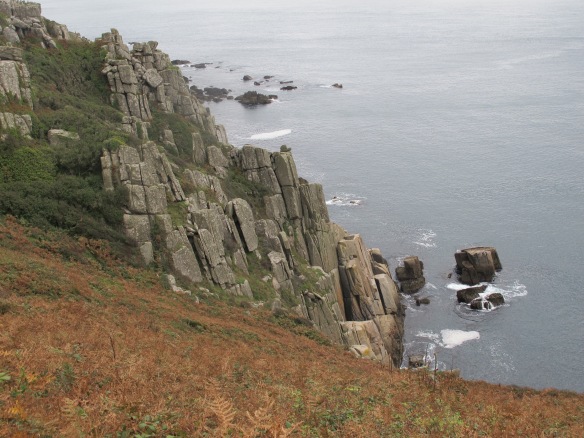 Penberth Cove feels like a working village – the houses do not appear to be holiday lets and there’s a lot of evidence of lobster fishing. I find a bench and settle down for lunch.

Just behind me and set into the wall is a National Trust collection box – I fish out 50p and slide it into the slot where it stays until I give it a shove with another coin. I wonder how regularly it is emptied. 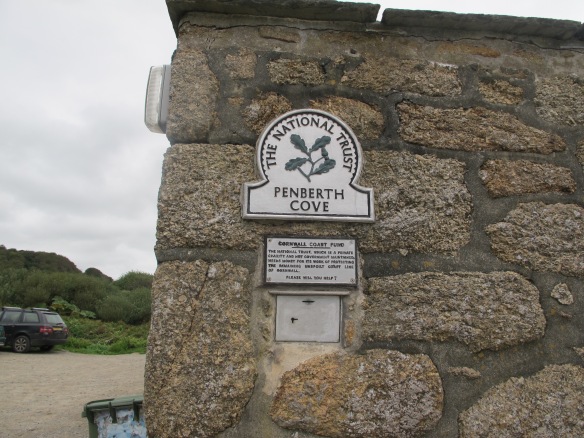 I am now not far from Porthcurno where I will stop for the day. I have set up a night in a YHA hostel some miles inland and I need to find a bus to take me there. I am also keen to take a look at the famous open air theatre built into the cliffs.

The beach at Porthcurno is stunning – one of the most beautiful beaches I have seen on this walk.

Following directions from a few locals I climb the path up the cliff to the theatre. The steps  are steep and there’s not a lot between me and the sea below – I pray that nobody is on their way down. 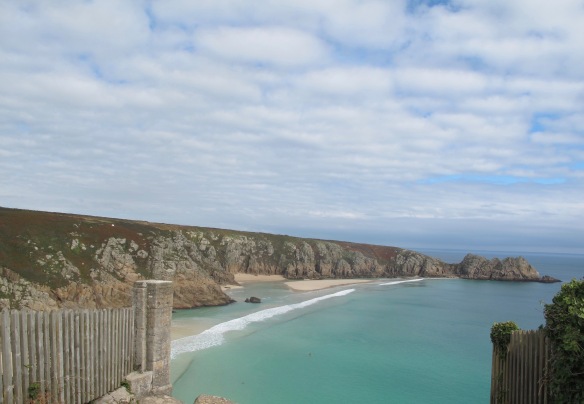 The cafe at the top is closed because there is a performance of Mikado going on – I pay my £1 to shuffle onto a viewing platform where beneath me Nanki-Poo and Yum Yum are in the throes of declaring their love for each other. 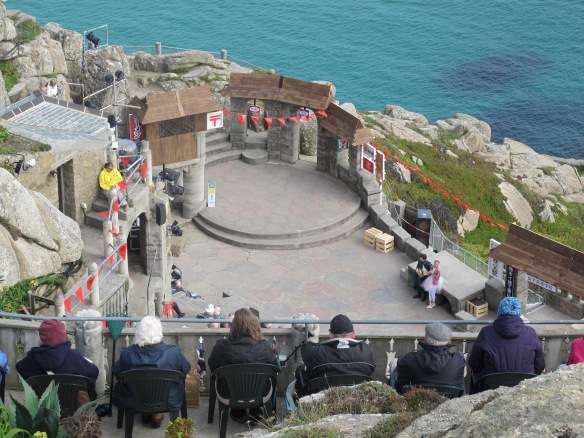 Putting tragicomedy aside I make my way down the road back to the village to catch the bus to the hostel, where I spend a surprisingly comfortable night round a table with beer, food and good conversation. Hostels have come a long way since I was young.

Distance: 8 miles (roughly, as my Jawbone let me down)