Our taxi drops us off on the road so that we can retrace our steps across fields and back to the coast at Pentargon – on the way back this lovely slate wall catches my eye. It is covered with lichen so it’s difficult to see, but unlike the ruins we saw yesterday the slates here are packed vertically rather than horizontally. 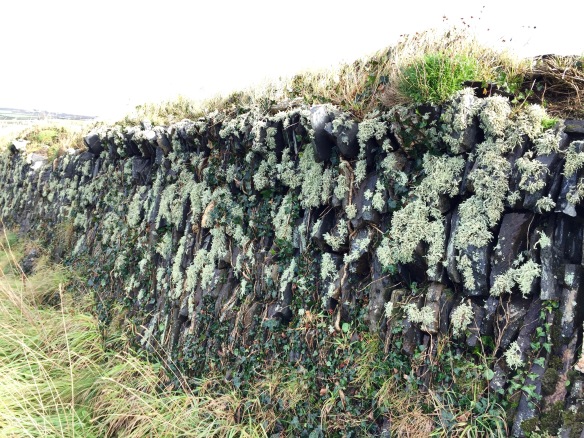 At Pentargon the path dips steeply down – imposing black slate cliffs line the gully and climbing up the other side we get a better view of the waterfall that we couldn’t see on the approach. 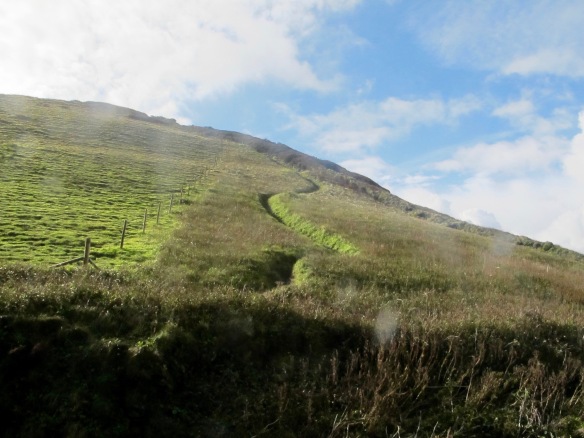 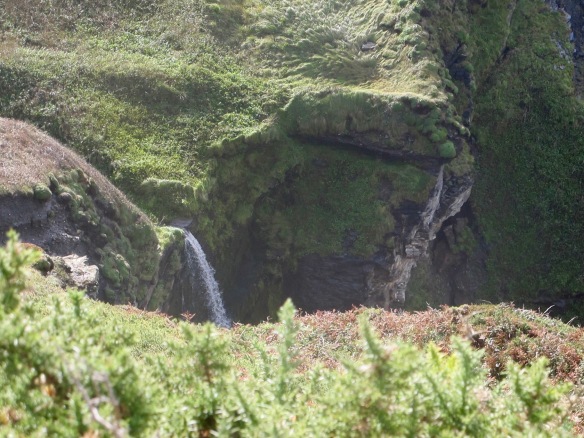 After the pull up from the valley I am looking forward to some flat level walking but this is not to be. As we climb up Beeny Cliff the path gets narrower and narrower, winding round the side of the cliff – I am happy there is no-one coming the other way. 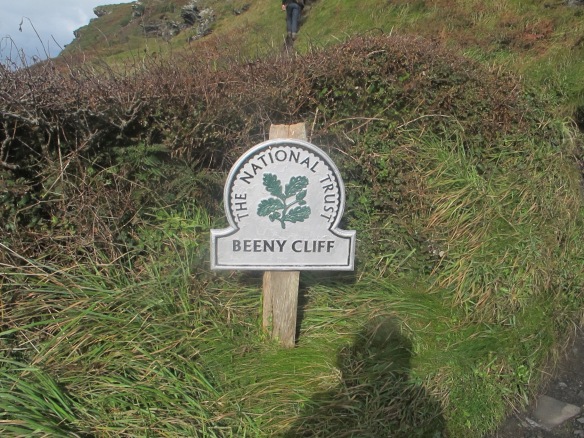 And it get worse, we climb slowly up the very steep and increasingly rocky incline to Fire Beacon Point – at one point I start to feel a little dizzy from the exposure but then I am a bit of a wimp as far as heights are concerned.

After numerous stops to catch our breath we reach the top – Damian stops to entice a pony over for a chat with not a lot of success.

From here the path levels out – it is a beautiful day and we can walk heads up, enjoying the dramatic sweep of cliff and cove ahead. 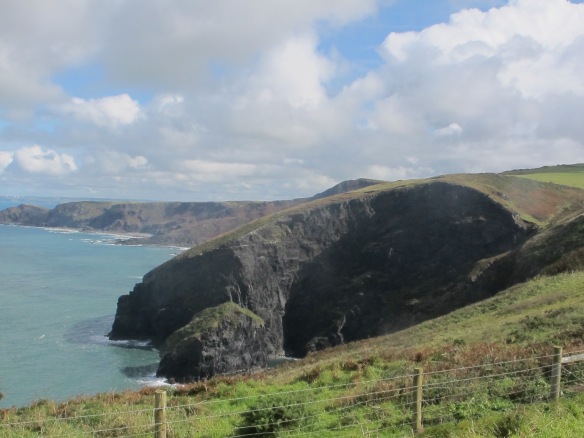 At one point the path gets boggy but the wonderful National Trust have again provided what’s needed. 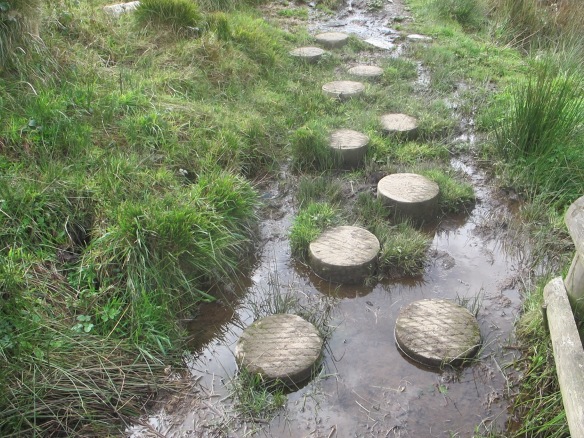 The calm of the level walking is suddenly disrupted by the sight of the path suddenly dipping down a very steep incline almost to Rusey Beach, where I’m told, very well preserved fossils can be found. The headline in the distance is Cambeak Head and on the other side lies Crackington Haven which is our destination today. 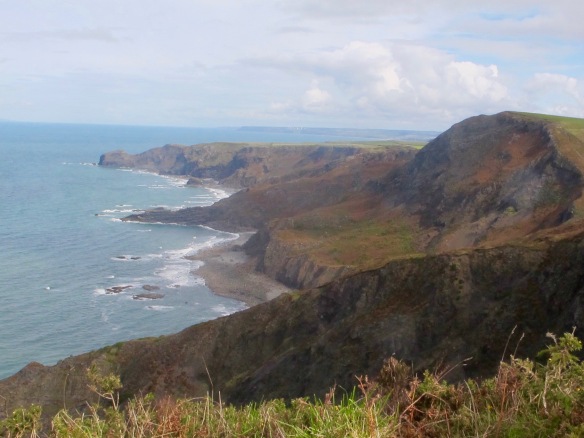 Feeling a bit of a fossil myself we pant and puff our way up the near vertical steps on the other side to the top of Rusey Cliff – ten steps and a breath seems to work. 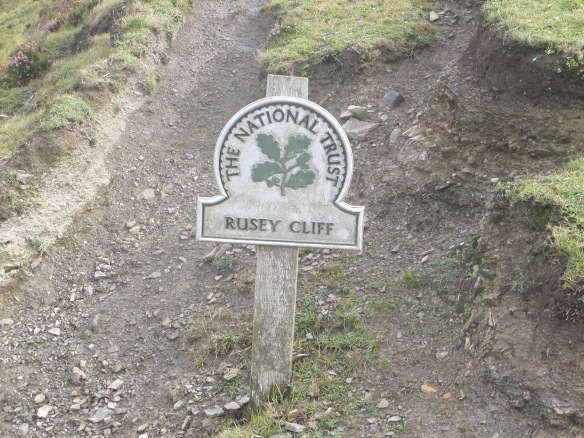 After a rest we carry on, passing two small beaches – the first one is named The Strangles and I wonder where on earth it got it’s name from. At the tip of the second beach stands Northern Door where part of the cliff has been hollowed out by the sea – where once was a cave is now a hole. 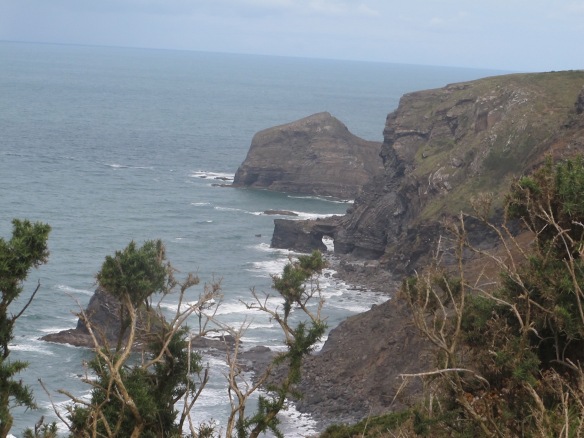 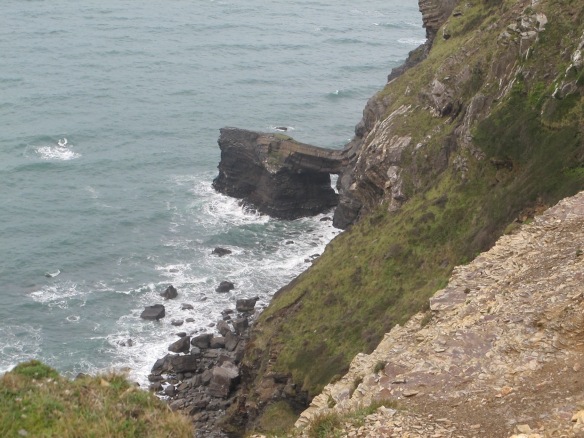 ……..and finally we reach Cambeak Head where we stop for a rest and to admire the striations in the cliffs – lying out in the sunshine, the rain of yesterday seems like a bad dream. 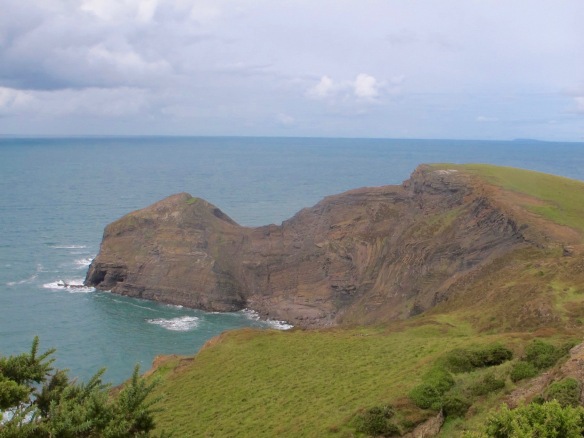 ……….soon we are looking down on Crackington Haven where we can catch the bus back to our BnB. 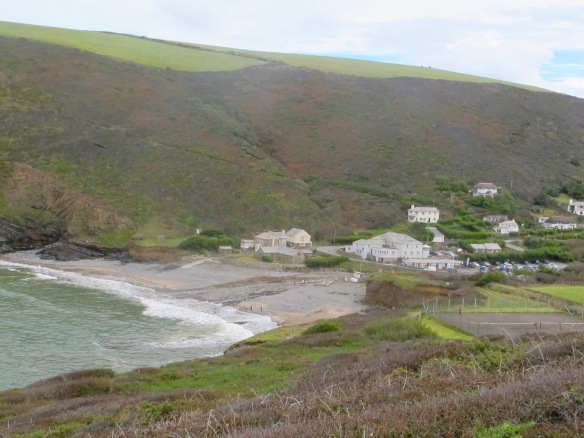 There is a pub but it’s a bit early in the day so we head for the cafe for a cream tea and sit people watching for half an hour. Outside the public toilets is a stack of tools for picking up rubbish and a little further down a sign warning people not to take stones from the beach – this little hamlet is obviously very protective of its environment. A few stones lie in front of the sign, a guilty conscience perhaps? 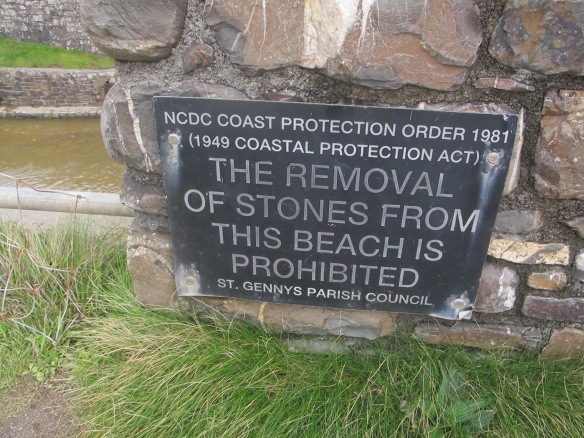 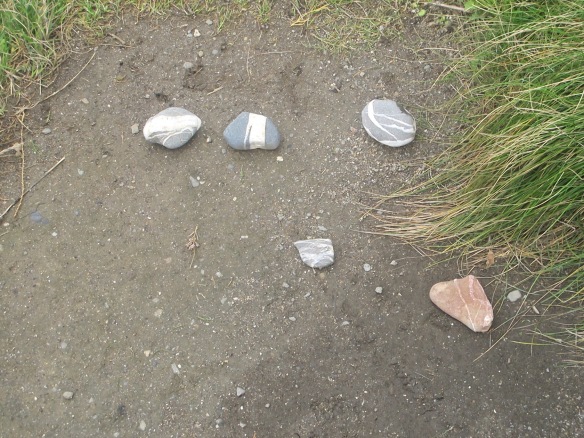 This has been a lovely walk.