I don’t really know where I got the idea from that Weston-Super-Mare was a tacky, run down seaside resort full of amusement arcades, dodgy theme pubs and screaming children. Yes there is a little bit of that but actually it is quite harmless, especially early in the morning. The Grand Pier has none of the elegance of Clevedon Pier but after a fire in 2008, which completely destroyed it, the pier re-opened in 2010 after a rebuild which is surprisingly tasteful.

So, alighting from the train at Yatton I spot the cycle/pedestrian path which will take me back part of the way to Weston.  I am walking in the direction of Congresbury but after crossing the River Yeo I will be turning right on to the A370 and then left onto a minor road and farm track over the Oldbridge River. 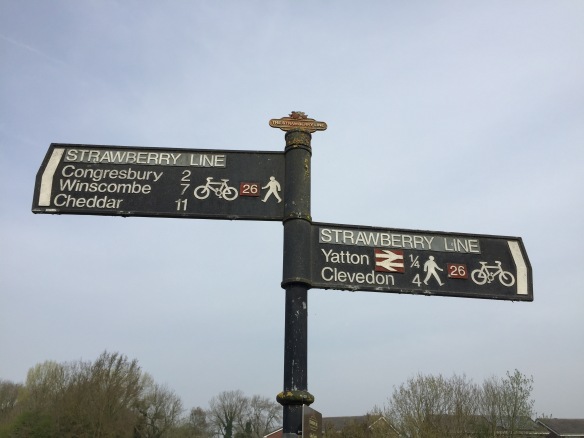 This walking/cycle path takes its name from the old railway line previously used to transport strawberries from the strawberry fields of Cheddar – It has a grand entrance and information board at Yatton.

However, as most train tracks are quite straight, walking this path is a little monotonous.

Eventually I cross over the River Yeo which is looking a bit weary, turn right on to the main road and then shortly after turn left onto a minor road which runs past a collection of farm buildings called Stepstones Farm.

This then turns into a stoney track which I hope will take me over to the next village called Puxton. Breathing a sigh of relief that there is no sign of an irate farm dog (I am always wary of walking past places that are not used to seeing people on foot).  I follow the track for half a mile when I hear the sound of angry barking. It’s coming from up ahead but I have no alternative but to hope that the animal has a responsible owner. The barking gets louder and hoarser, a sure sign of bad temper, but the gods are with me and when I turn the corner I see that the beast is caged in behind a high metal fence. It is a big dog and all my attempts at shushing it just seem to irritate it even more. I scuttle past with as much dignity as I can muster and do not look back.

Arriving in Puxton, a bit hot and bothered I decide to cool off in the church. 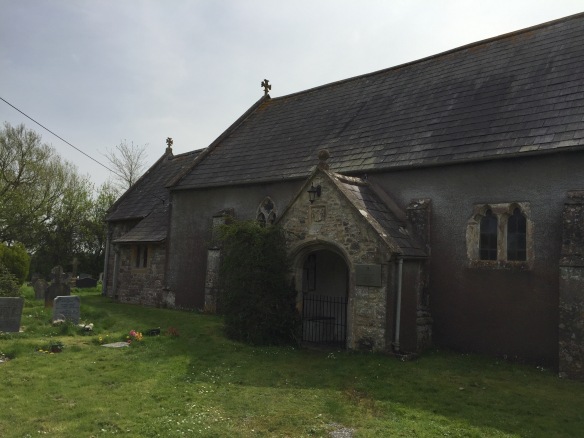 From the information board I gather that the church dates from the 13th century and is not used anymore. It is a Grade 1 listed building with a leaning tower due to the peaty foundations.

Inside it feels dusty and forlorn – worn woodwork and pews moulded by the pressure of hands over a period of 600 hundred years. 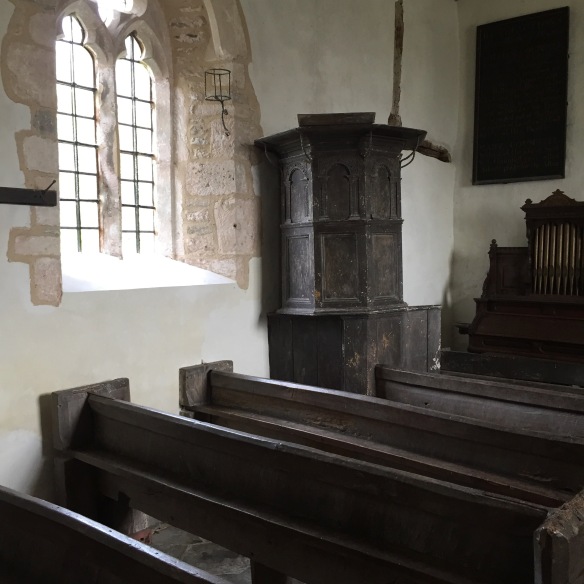 Blinking in the bright sunshine I emerge from the church to continue down the road. As I turn off right on to a footpath I am startled by the sound of a horn and a whistle. Surely there are no trains around here? But quite quickly I realise that behind the high hedge is a children’s outdoor theme park with toy train rides, canoeing and all manner of climbing activities – this is Ruxton Park.

I walk on another mile or two ending on the A370 and cross the same motorway as I did yesterday – and I still don’t like the feeling of hundreds of vehicles driving at high speed underneath me.

From the outskirts of Weston I walk back to the station to pick up the rest of my belongings from my BnB. In the centre of town I pass this amazing structure which lifts my spirits. As far as I can see this is a bus shelter!