Instead of grassy paths across the top of cliffs or narrow lanes through deeply wooded valleys, our walk today starts off on the stony beach round the back of Porlock and continues across flat marshland and fields until we get to Porlock Weir. 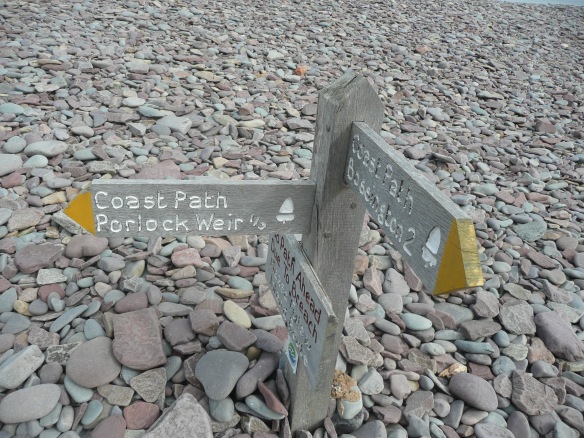 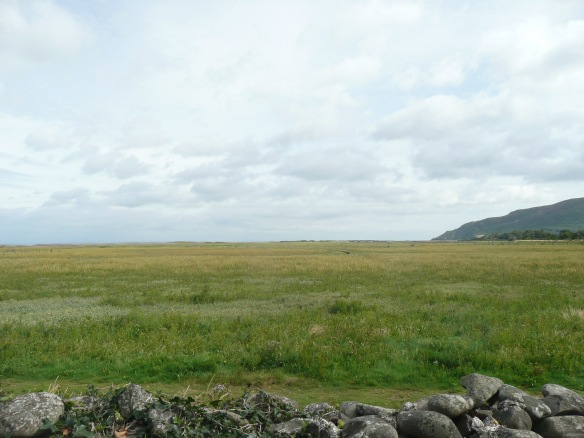 Damian has one of his Dr. Doolittle moments………………

Just outside Porlock Weir this sculptural breakwater catches my eye………………………. 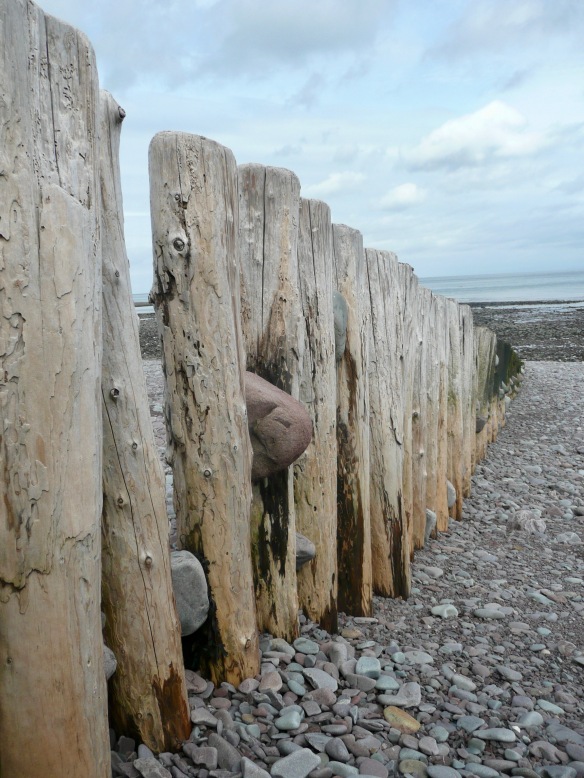 Porlock Weir is sleepy this time in the morning – we have a quick look round before heading up behind the main hotel to skirt the edge of a patch of woodland to come out onto the road once more. 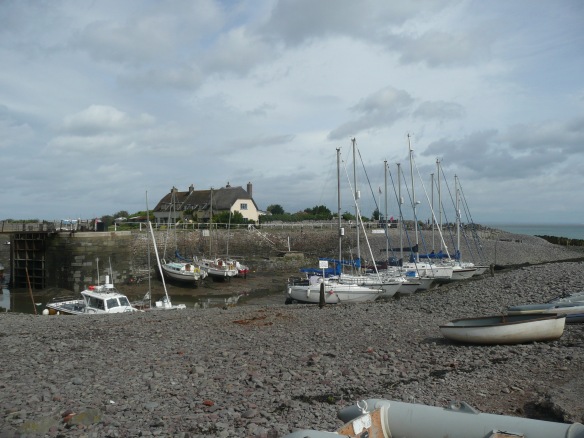 But we are not allowed onto the road – the sign on the gate says “no walkers” and for cars, motorbikes and motor homes there are toll charges and warnings. 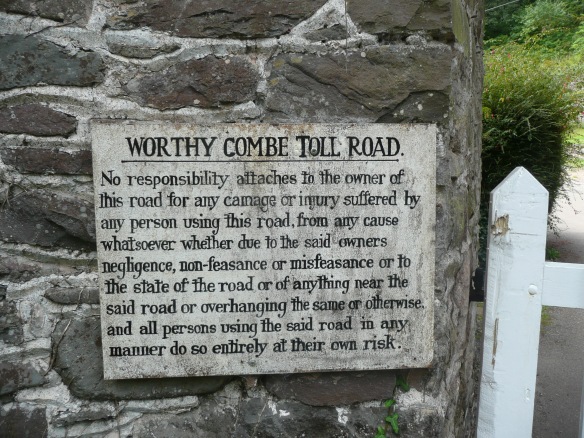 For those like me who have never heard of non-feasance or misfeasance the word means a transgression, especially the wrongful exercise of lawful authority. I can think of a few instances where this word may be used in the circus that masquerades as a government at the moment.

No – we are sent off to the right and up into the damp dense woodlands of Yearnor Wood that shuts out the sunshine for a couple of miles, but eventually opens up into the tiny settlement of Culbone – presided over by the smallest parish church in Britain. 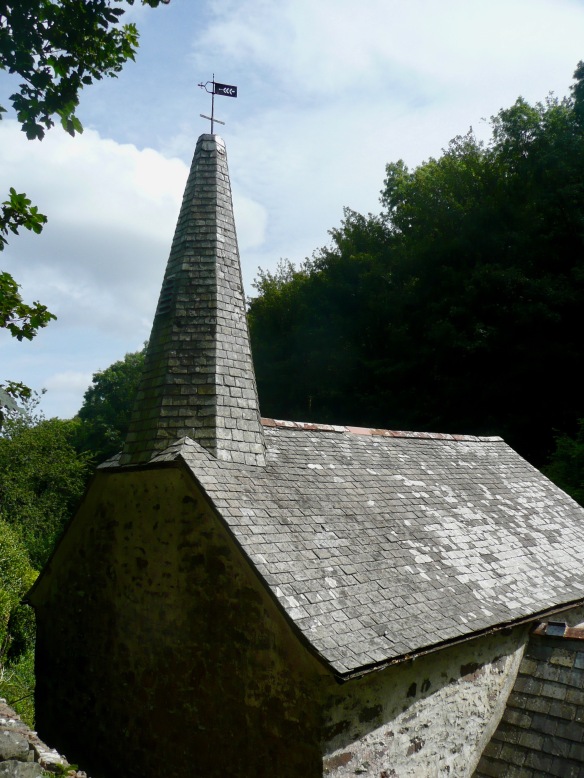 The church is dedicated to the Welsh saint Beuno and recorded in the Domesday Book of 1086. It is just 35 feet long, with the nave taking up 21 feet of that length and even though there is no road access, there are still regular services. These two windows below are believed to be 1,000 years old. And there is obviously no electricity…………………………………. 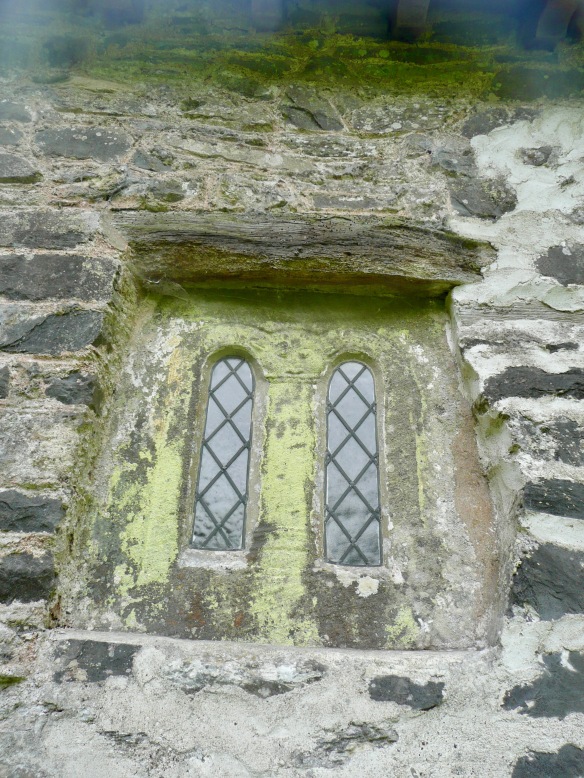 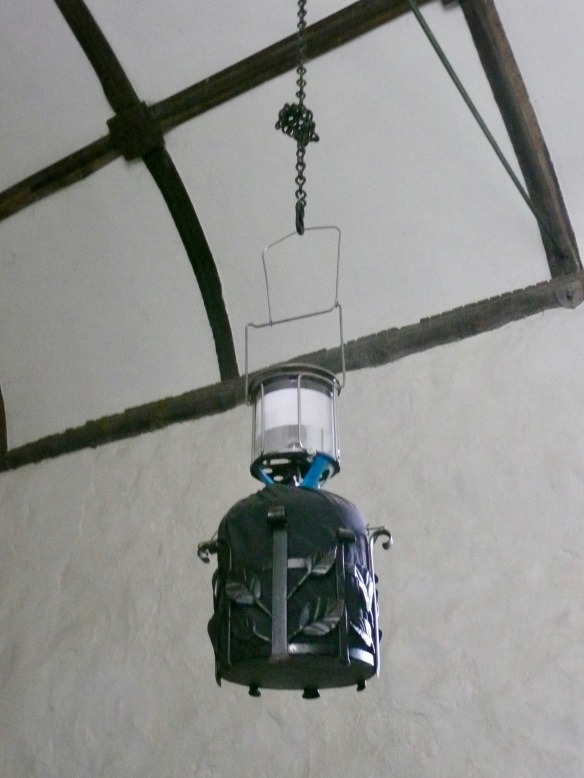 Apart from the church there are two other buildings in Culbone, both of them houses – here is one of them. 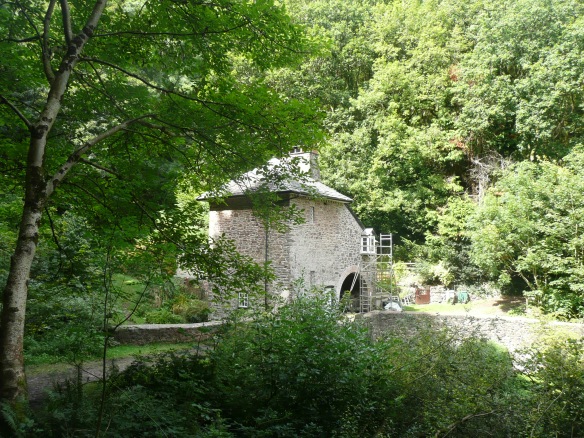 I do love walking through forests but what follows is a bit too much of a good thing. We plod along through Culbone Wood then Embelle Wood and Yenworthy Wood. We can see nothing through the dense covering of trees with only the occasional patch of dappled sunshine and a lucky find! 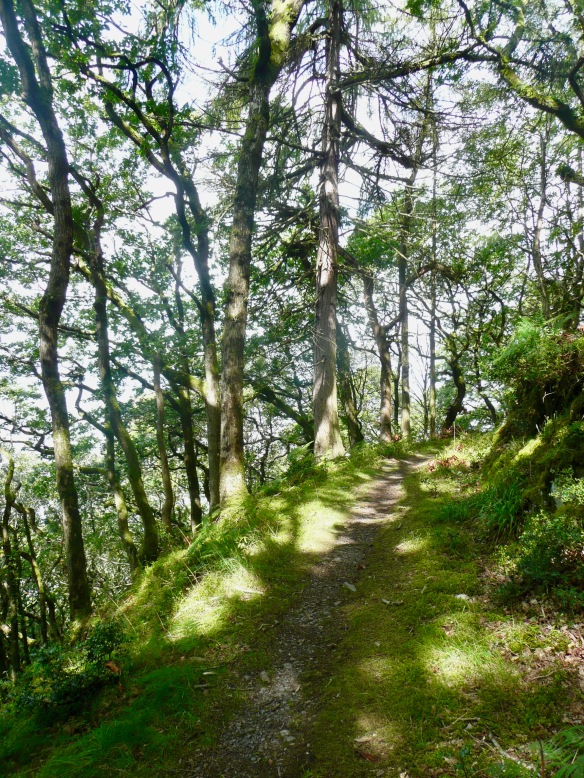 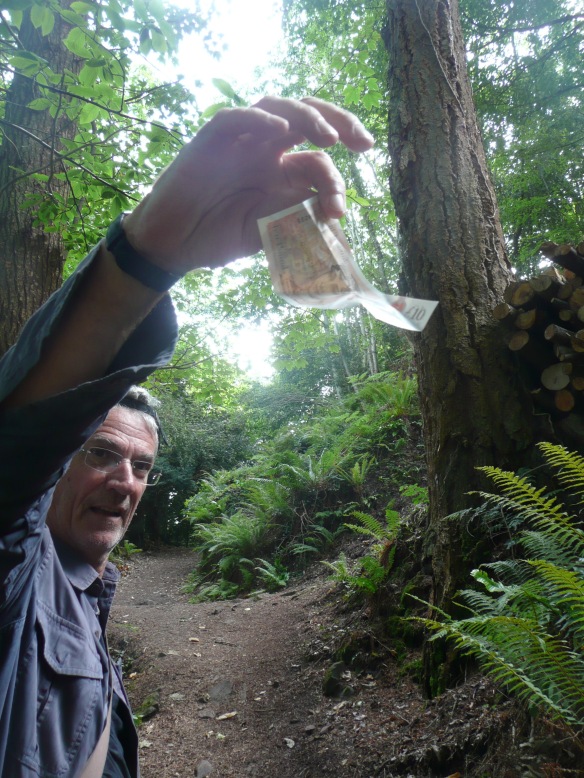 Until eventually the terrain changes and at a junction we meet this monster. 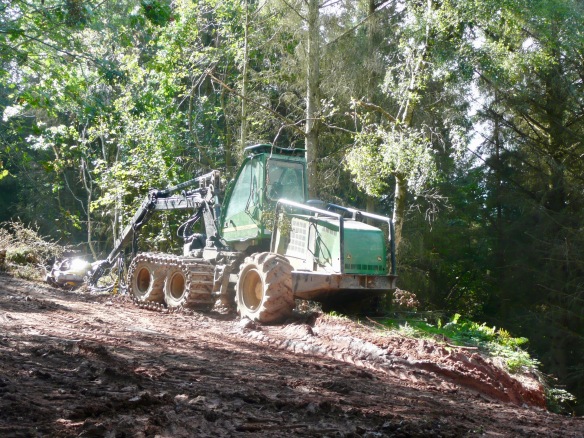 This machine can apparently fell, strip and saw into neat logs, whole swathes of forest with only one man at the wheel. As we investigate, a horrendous roar starts up to our left which sounds as if some mighty pre-historic animal has just discovered our presence and taken objection. 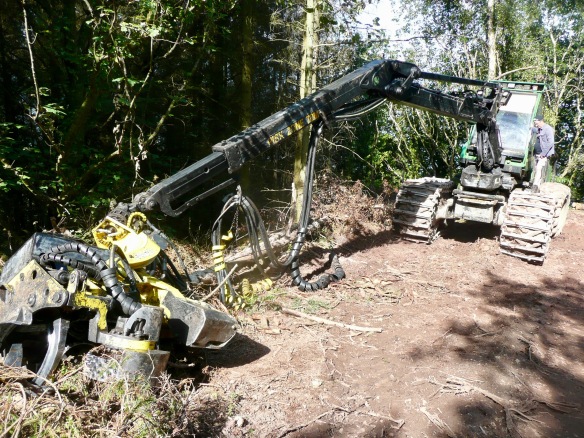 Sure enough up the hill trundles one of these machines – we scramble up the nearest bank as it sways and snorts its way around the tight corner and past us. What it leaves in its wake is a mile of unpleasant trudging through churned up mud and puddles. 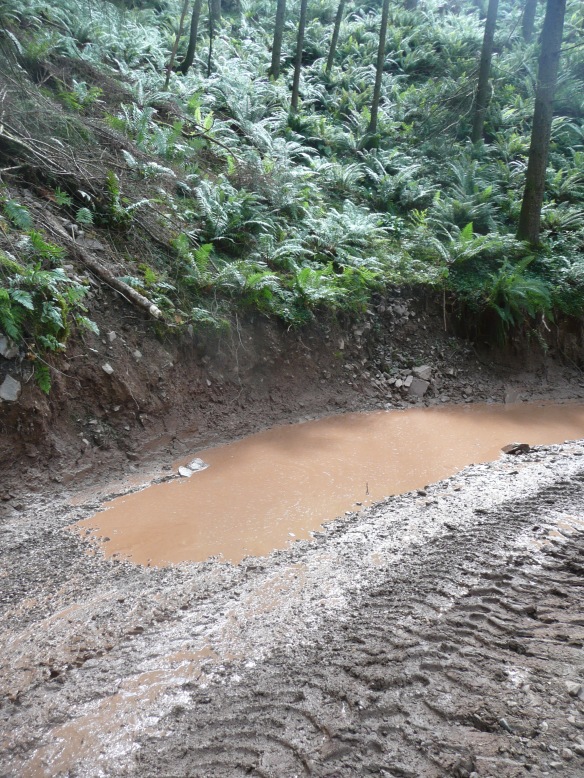 Eventually we leave the logging industry behind and move into calmer territory. The Sisters Fountain is a natural spring which was enclosed in stonework in the nineteenth century and named after the daughter (or daughters, or nieces, depending upon who’s telling the tale) of the first owner of the Glenthorne estate.

There is a legend that Jesus drank here, as a youth, when he passed this way with his uncle, the Phoenician tin trader Joseph of Arimathea, on their way to Glastonbury. Joseph is said to have struck the ground with his staff, prompting the flowing of the holy water. We stop for a while in this quiet peaceful place. 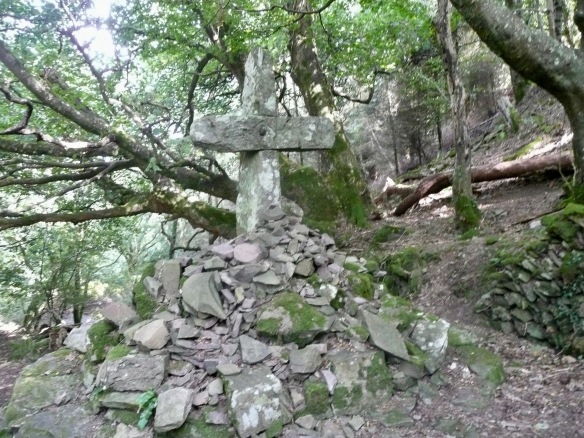 The walk from here now opens up a little allowing us views of the coast for the first time for hours. 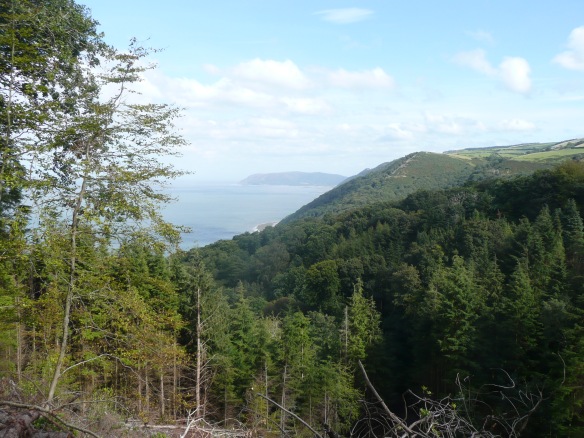 ………..and soon we are walking on a path lined on both sides by a dense cover of rhododendron bushes planted in the mid 19th century as part of the Glenthorne Estate – it must be an amazing sight to see them in flower in Spring.

On further investigation however I learn that the plant is responsible for the destruction of many native habitats. The reason for this is simple. Where conditions are suitable, Rhododendron will out compete most native plants. It will grow to many times the height of a person, allowing very little light to penetrate through its thick leaf canopy. This effectively eliminates other competing native plant species which are unable to grow due to insufficient light. This in turn leads to the consequent loss of the associated native animals. Who would have thought it? 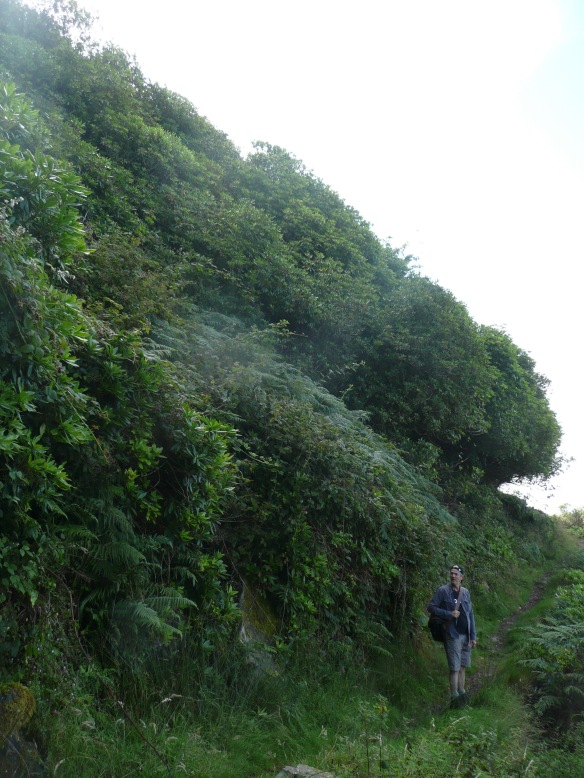 By the time we have reached the end of Glenthorne Cliffs we are both very tired and thirsty so it is with joy that we discover a tea/drinks/fruit stop organised by some enterprising souls who live nearby. 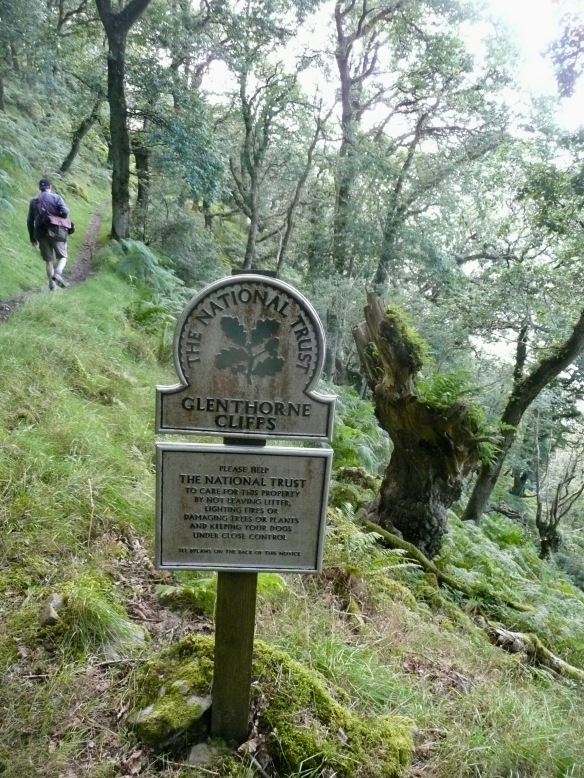 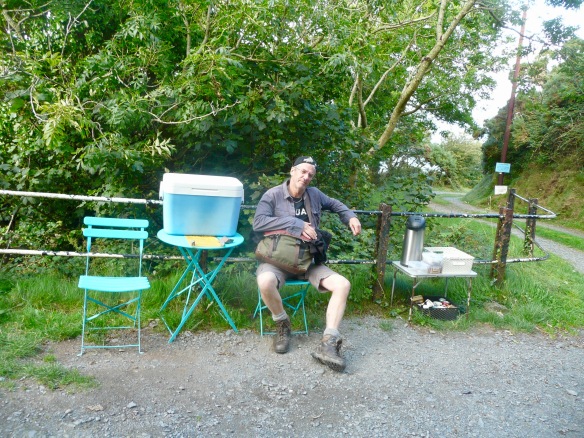 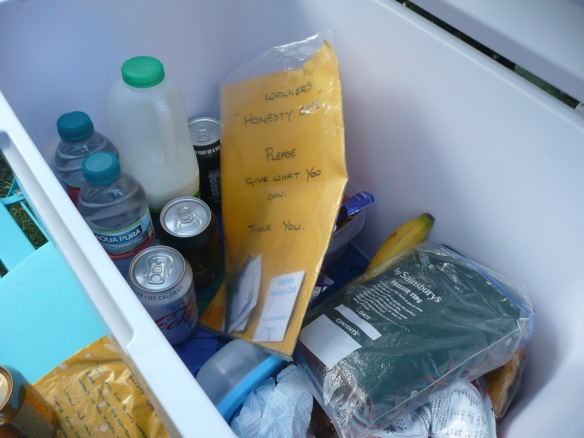 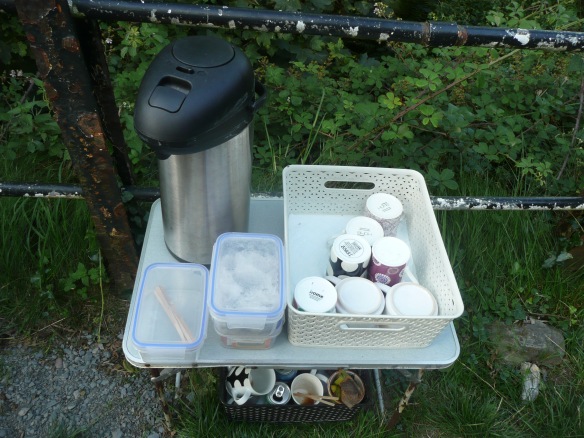 Moving on we walk through the strangely scabbed hillsides of the Foreland – the path is endless, I use my pole a lot to get me up the slopes, I feel a hundred years old. 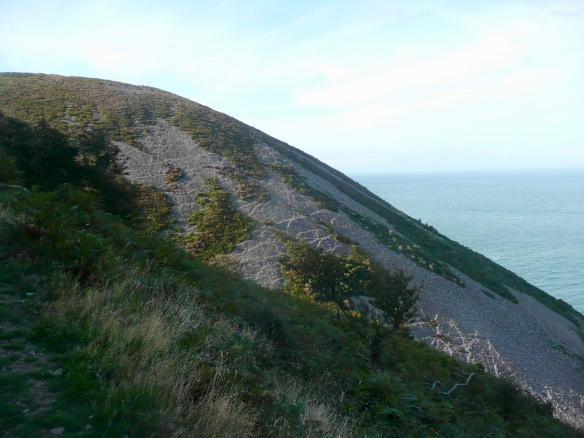 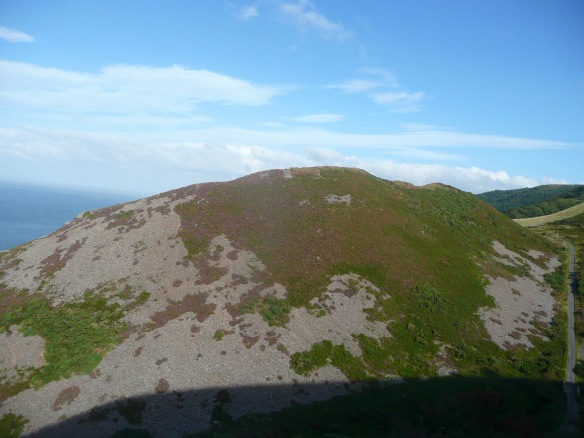 ………….until finally we look down on the wonderful sight of Countisbury Church and then it’s through the church yard and out the other side to the pub.