I have a companion today, Sharon, a friend I’ve known from primary school in Wales. Out of touch for 20 years and now together again in London. Out of the station we hit the sea front earlier than I remembered from my walk to Birchington and before us are high chalky cliffs sweeping down to the familiar concrete promenade meandering into the distance.

Following the sea wall we reach Margate quickly and wincing at the gaudy shop fronts we duck into Tracy Emin’s ugly gallery for a cup of tea. Whisking past her ineffectual drawings we stand for a while and take in Rodin’s The Kiss – such passion – it all seems so long ago!

After tea we head up a main road out of Margate and at the first opportunity down to the beach.

The tide is out, sand becomes rock, which is gradually covered with soft springy layers of dark green seaweed – clouds of flies with every sloshy footstep. Progress is difficult but rounding a corner we are rewarded with the sight of Kingsgate Castle spread out on the clifftop. 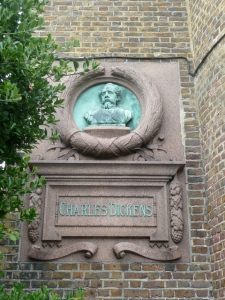 A couple of soggy tuna sandwiches later and we find ourselves in a very lively Broadstairs, our arrival marked by a sober plaque on the wall of Bleak House.
Unbeknown to me my watch has stopped and is registering 3.30pm, so we dawdle a little among the beery folk festival crowds. Later I realise that we are running three hours early and that my slight disapproval of heavy early afternoon drinking was totally unjustified. It was a good day.