Clarence Pier funfair is resting this morning and the air is clear and still. I am one of very few people out walking along the promenade in the early morning sun.

Following the trail of engraved stone slabs laid to celebrate the Millennium, I am guided through the shadows of St. James Fort and out the other side, stopping for a brief moment to look at a young girl in a bikini posing for photographers at the water’s edge. The photographers are both middle-aged men and it makes me feel a little uneasy.

Anyway, on I go following the trail, passing boats gently rocking on the water and a few historic buidings, the ever present Spinnaker Tower a dental white against the bright blue sky. I have decided not to go up the tower but keep that experience for the day Damian and I take the ferry to Brittany. 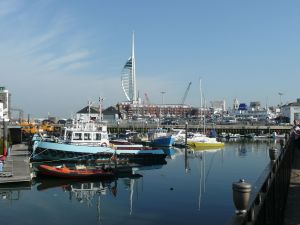 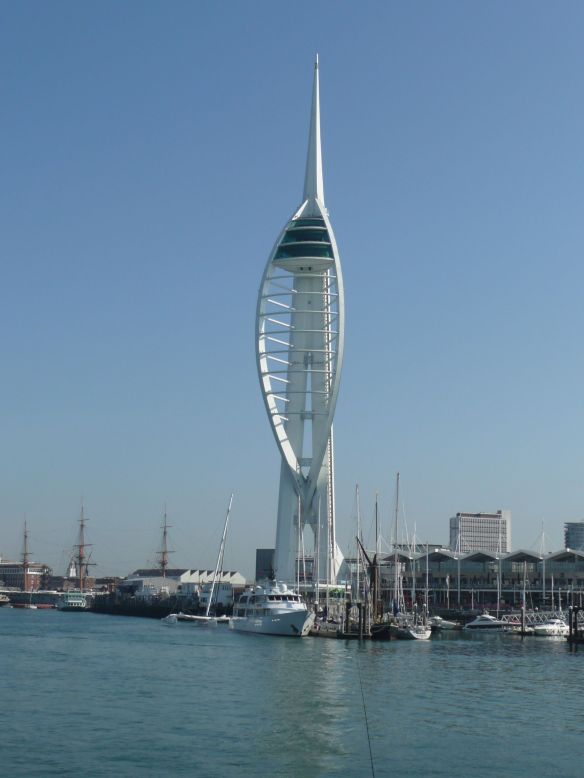 Suddenly I come to an abrupt end where the chain motif of the pavement disappears under a boundary fence of a building site. Following directions from a passer-by I make my way towards Portsmouth Harbour railway station – where I take the ferry to Gosport, accompanied by a tail wind of shrieking seagulls. From the ferry I take a few photos of the magnificent HMS Warrior, a nineteeth steam and sailing warship which was built to fend off the French.

From Gosport the footpath marked on the map follows the road for quite a while. On both sides a very impressive red brick wall hems me in, but thankfully there is very little traffic.

And it is then, at the end of the road, I discover to my horror, that I have left my iphone charger in the room of my B&B. It takes me an hour to retrieve the charger and be back at the same spot where the ghastly realisation took place – another lesson learnt the hard way.

About 30 minutes later, after walking past the intimidating hulk of what I later discover is an Immigration Removal Centre, I follow a footpath back to the water. The path cuts through a golf course overlooked by the centre and I reflect upon the painful irony of the arbritrary fortunes of those in the “holding pen” and the ladies of Gosport engaged in a gentile game of golf.

Off to the right is Gilkicker Fort, a Victorian coastal fort which is now closed to the public. The plans are now in place to build a very different kind of fort – luxury houses with what I imagine will be their own private beaches – snort!

From here on the hard shingle path continues until it turns into a “proper” promenade at the lifeboat station. I walk past yet another second world war memorial – this one to Canadian forces who used the bay as a launch point for the D-Day landings.

Eventually the path turns into shingle and after reading the information board about the conservation of coastal plants, with a warning not to step on them, I enter into a long stretch of shingle beach known as Browndown. This used to be a military training ground and as I trudge along in the deep shingle, the sun beating down on my hatless head, I start feeling like a soldier training for her next mission in Irag or Afghanistan. There is no-one around and the future is shingle. After a long while I spy a lone cyclist wearily pushing his bicycle – goodness knows why. I stop to ask him if he knows of an alternative path and he reassures me that the shingle will soon get more compacted and easier to walk on. It doesn’t and I am ashamed to say that I now resort to leaping from one clump of vegetation to another, hoping and praying that they are not the most threatened type of coast plant. 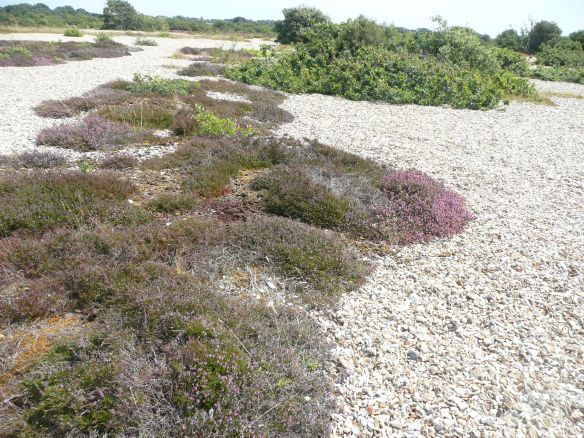 Eventually it gets easier and following well worn paths I end up at Lee-on-the-Solent where I sit and eat a well earned ice-cream. Still following the Solent Way I walk towards Hillhead Harbour where a children’s sailing competition is in progress – the brightly coloured sails of the twenty or so mirror dinghies catching my attention, as does the trainer barking instructions from the shore. As I walk past the harbour a beautiful shire house clops by with a young girl perched on its broad back.

To my right are the marshes of Titchfield Haven, I see two groups of people busy with binoculars. A while later I am on shingle again but not for long.

Ignoring the signs saying private beach I walk past a row of cosy beach houses and spy a grassy path winding its way up the cliff. After a short consultation with a sweaty but jubilant cyclist, I decide to forgo walking on the muddy beach and take the inviting path up into a cool green shady world with the occasional porthole of sea views.

Emerging from this lovely path I can see the chimneys of the power station and oil refineries of Fawley – a difficult navigation for the very near future. 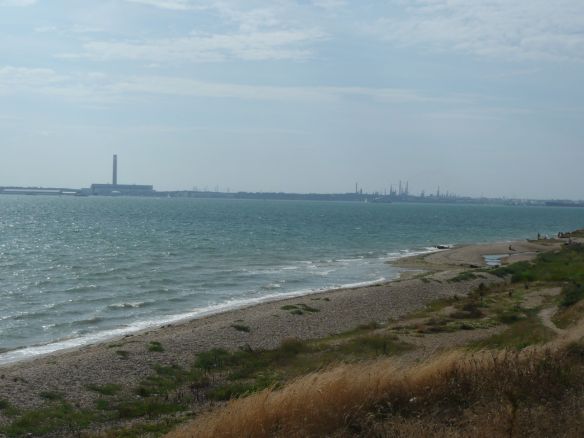 Unwilling to skirt around Solent Breezes Holiday Park (out of my way, this is my coast as much as yours etc. etc.) I waste valuable time trying to find the path.  Eventually I follow a promising dirt track which leads me back to the beach, and a clear run up the bank of the river Hamble to the marinas and, what I’m told, are the millionaire properties of Warsash. 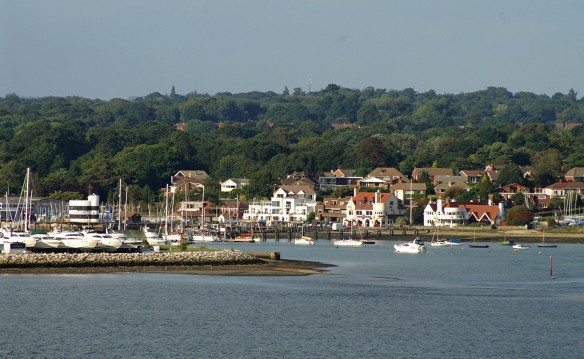 It has been a long but satisfying walk and I’m looking forward to a cold beer, a shower and bed. Sometimes life can be so beautifully simple.