It’s going to be another hot day and for the umpteenth time I scold myself for not rising above my aversion to shopping, to go and buy some lighter walking boots…….next week maybe. Following directions I head for the small bright pink building on the shoreline which is the shelter for the Hamble ferry. In front of me is a young girl, a little wobbly on her high heels on the cracked concrete, and a woman of my age shooing along two small children and a beautiful but very nervous sheep dog. We all pile in to the very small pink ferry and chug our way across to the other side. The dog, she tells me is a stray rescued by an animal charity and that when she applied to get a dog she was not allowed to see any pictures, only a description……she was very lucky with this one. 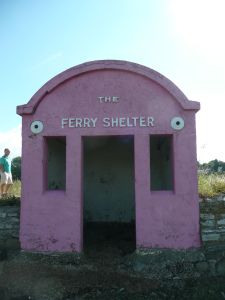 On the other side, in Hamble-le Rice, a marina blocks the path, so I turn up a street, meander around some parkland and then spy my entrance to Hamble Common. I now find myself on a shady woodland path which then opens out to green scrub and ponds.

At one point a sculpture surprises me and an overgrown bench sets me thinking as to how long it would take for the ivy to smother it completely…………………yes I know. 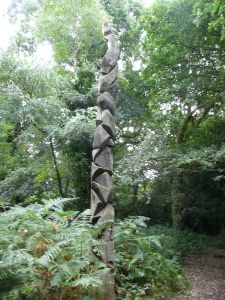 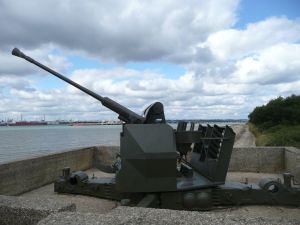 Coming back to the shore I walk past an anti-aircraft weapon that was apparently used to protect the BP fuel terminal and extremely long jetty just ahead of me.  Oil from the Fawley refinery across the water  was pumped here through an underwater pipeline and then taken by ship to Sandown on the Isle of Wight. From here pipes were laid under the Channel to supply allied forces during the invasion of Europe. This was known as the PLUTO operation and what really caught my attention was that the pumping stations here in Britain were often camouflaged as private houses, offices and ice-cream kiosks!

So…….for reasons I won’t go into here, when I reach the oil refinery I decide to head inland  and after twenty minutes of road walking I see a sign for the Flying Boat Cafe, which at the time I thought was an odd name…….all was to be revealed later on. Heading back towards the shore I join the Solent Way again on a clear path beside Southampton Water, running parallel to the shingle beach. Across the water I can see Fawley Oil Refinery and as I walk I see evidence of people ignoring the signs prohibiting fires. 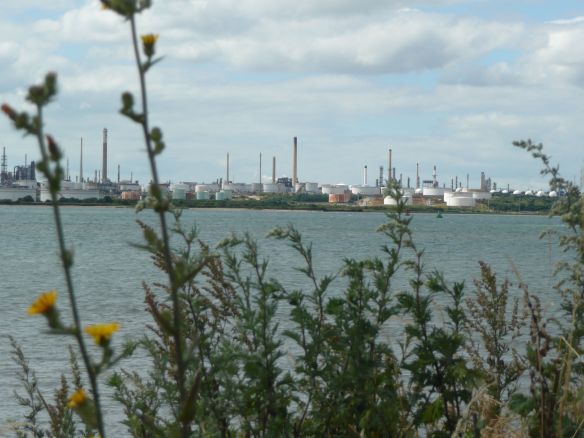 Eventually, more and more people come into view and the path opens up into a landscaped country park with some magnificent trees, that I later discover are Monterey Cypresses. This is Victoria Country Park and the building in the photo is the chapel of the now demolished military hospital. At the entrance is a sculpture into which someone has dumped litter and plastic bottles. Feeling virtuous I take the litter into the entrance hallway and ask for a dustbin – a lady in a twin set and pearls, somewhat begrudgingly takes the bottles from me with a strained smile. 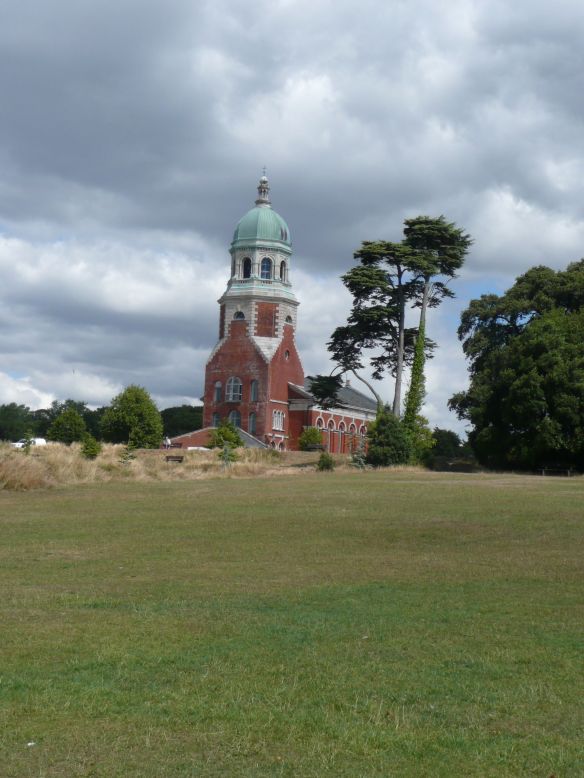 Walking out of the park I read that Queen Victoria and Prince Albert laid the foundation stone for the hospital – it weighed 2 tons and was hewn from Welsh granite.

My way is now barred by yet another marina so I walk up into the village of Netley and eventually find a turning off left back to the Solent Way. This is a lovely walk, a clear path alongside glittering blue water, while up ahead I can see the indistinct shapes of large container ships in Southampton Docks.

Soon I am walking towards the outskirts of Southampton, an area known as the Weston Shore, a popular beach destination for city dwellers in the 50’s. Today it feels a little abandoned – four east block skyscrapers strangely painted baby blue occupy a large area of wasteland, a few children play furtively in the bus shelters.

And then it’s downhill from here, past run down houses and grubby shops, massive building sites slamming up “luxury” dockside apartment blocks, a tree, planted for the Millennium, is spared. 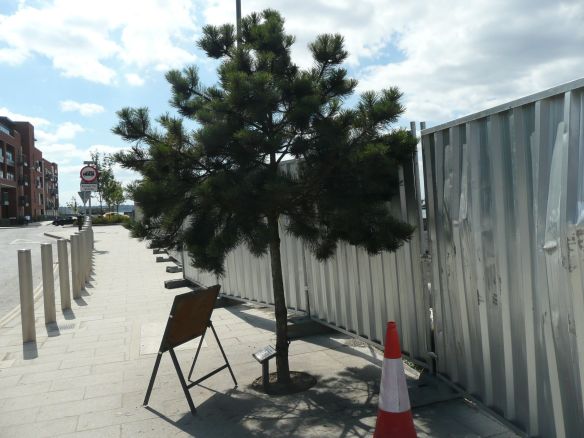 With some trepidation I walk up the steps leading to the massive grey span of Itchen Bridge. A sign catches my eye and as I wobble across the bridge, fast traffic just a little too close, I see these signs at regular intervals. 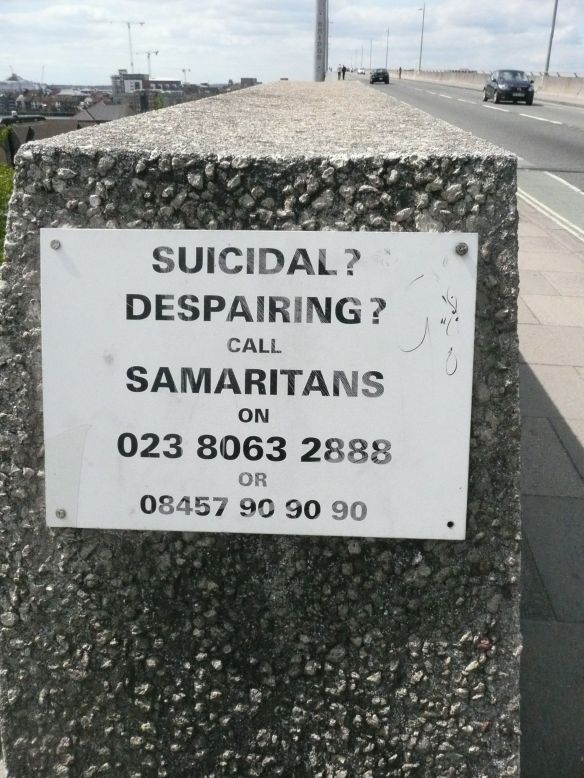 Trying not to think of people hurling themselves into the water I take a few shaky photographs.

Down the other side, through the gloom of a subway, I navigate myself down to Town Quay where I wait for the Hythe Ferry. The ticket collector, supplying me with change for the ferry, reveals that the following day there will be three cruise liners in the docks and that they will all be making a staggered departure from 16.30 onwards. One of them is the Queen Elizabeth – I make a mental note to encourage Damian to come earlier than planned and to bring the binoculars!

The Hythe ferry appears somewhat ramshackle compared to the catamaran jet which has just roared its way out of the harbour towards the Isle of Wight.  It does however provide its passengers with spectacular views of the port and the oldest, sweetest electric pier train in the world – but more of that tomorrow.