The ferry is docked but we are told to wait 10 minutes before boarding – so we wait – myself, a cyclist and the ship’s dog, a wet dewy eyed spaniel. 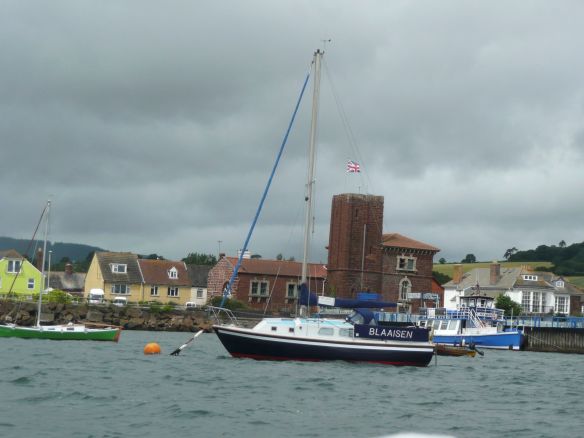 On the other side Starcross huddles under a grey sky and I take a photo of Brunel’s pumping station, part of his plans for his Atmospheric Railway – this is a Google explanation:

The concept behind an atmospheric or vacuum railway was simple. Instead of a conventional steam engine, the railway would have stationary engines at either end. A pipe ran down the middle of the rails, and the lead carriage had a piston head that fitted into this pipe. The engines would generate a vacuum in the pipe by use of suction, and the pressure change would pull the carriages from one end of the line to the other.

Theoretically this should produce a cost saving, as the engines need not move their own weight or carry fuel with them.

One of those best laid plans of mice and men………

Alighting from the ferry I turn left and spend a long time walking on the road – off to the left is the railway line which soon blocks the view completely and then it starts to rain.

I walk, it’s not so bad, leafy pedestrian paths running parallel with the road have been kindly provided but by the time I reach Dawlish Warren I am a little weary of this “coastal path”. 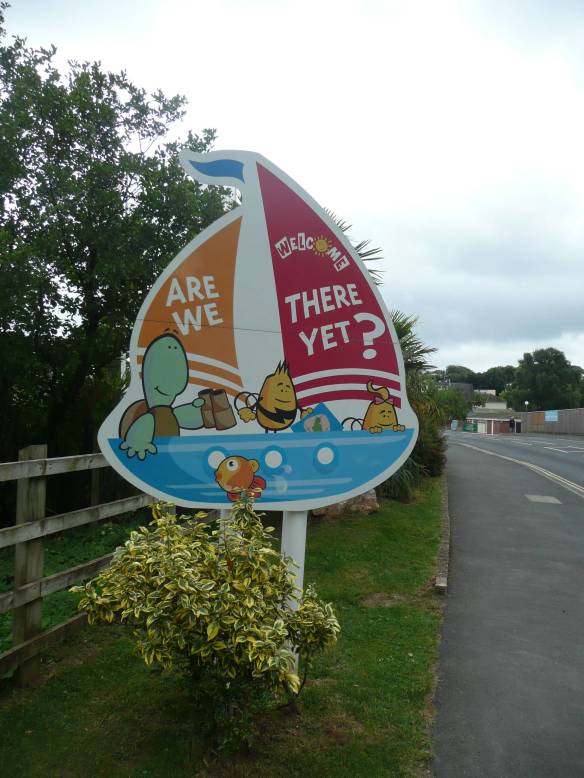 The approaches to Dawlish Warren are nothing but a massive holiday complex, little knots of damp tourists huddle miserably under umbrellas, bored children whine.

Further on signs abound warning of how dangerous it can be to walk the coast path from here to Dawlish. Having learned my lesson in Porthcawl I decide to go for local knowledge but the lady in the tea stall says no, only to the “Red Rock” – the path is blocked further up. Remembering the TV images of floating railway lines and huge waves hurling themselves at seafront houses  I am almost convinced, but something urges me on.

I walk up to the “Red Rock” and stand deliberating………it’s a long way back if I can’t get through and there’s no way I can scramble up the cliffs to walk along the top. I decide to risk it.

As I walk the trains fly past me – on the other side it is high tide and the waves pound the seawall. So far so good, I can see Dawlish clearly now and start to relax, making space for the creeping realisation that I have seen “Red Rock” before, from the window of the very trains rushing past me at the moment. At that time I was on my way to Gaia House for a weekend of silent meditation, hard beds and delicious vegetarian food not forgetting the sore knees – insights? I had a few but then again….

Lost in thought I come to a shocking halt, is this the first barrier? Can I climb round it? Does the path really dwindle to nothing a bit further up? But no, in my panic I forget to look behind me (didn’t those childhood pantomimes teach me anything?) and lo and behold there is a footbridge to take me up into Dawlish, through the town and back down the other side – phew! 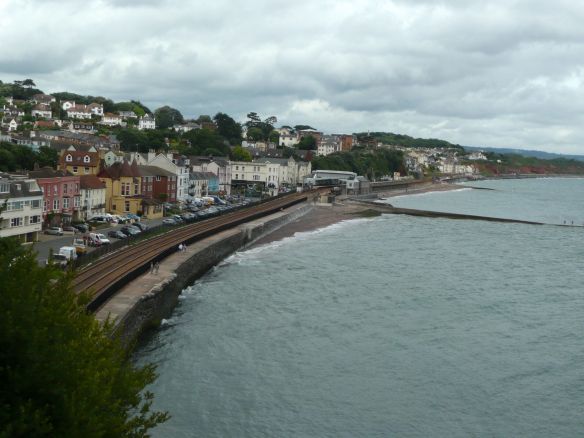 Out of Dawlish I clamber up Lea Mount from where I can see the promontories of Parson and Clerk and Shag Rock (the mind boggles). 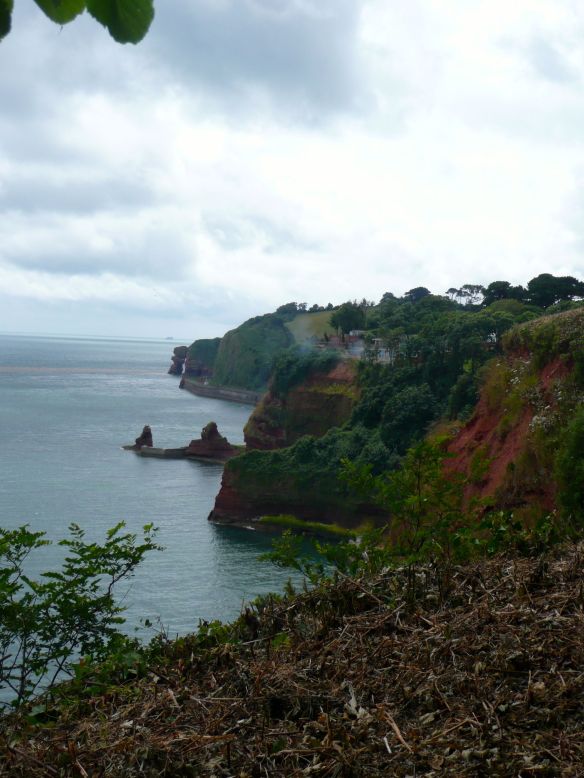 The area is fenced off but after a bit of wandering around I find an exit which leads onto  a tarmac road.

There is now more road walking than I feel there should be, so I stop to ask for directions. The middle aged couple are gardening, their outfits strike me as a little malapropos, the lady of the house in a bright red sweater to match her lipstick, her husband sporting a pair of immaculate slacks and a panama hat. She screeches when I mention a particular hill I need to climb but they are friendly and knowledgable and send me off through fields and up and down very steep paths, running parallel to the railway line below. 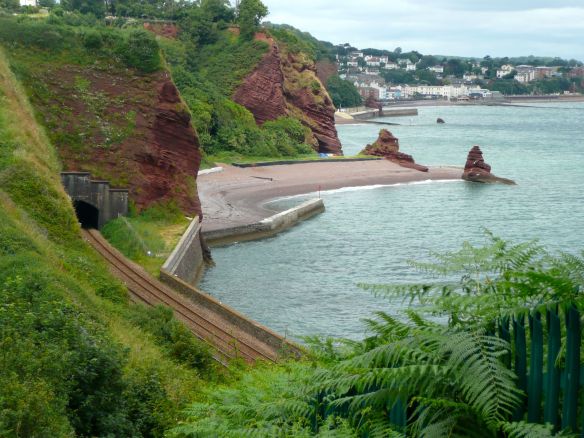 Finally, the landscape evens out and I come to Mules Park (although I don’t see any) at Eastcliffe – the path leads gently down into Teignmouth which is a bit of a disappointment.

There are very few people around due to the miserable weather and as I walk past the crumbling pier I start feeling a little despondent. Food is needed, so I head for the beach cafe and after ploughing my way through a slab of lasagne I feel so much better about the world.

The ferry to Shaldon goes from the “back beach” – there is one just arriving.

My fellow passengers include a group of boisterous schoolgirls – the skipper who obviously knows them, makes a couple of futile attempts to get them to calm down but gives up in the end. These squealing, shrieking creatures in cotton tops and short skirts are the only ones who seem oblivious to the heavy drizzle which is now seeping through my “showerproof” jacket – I am glad to get off the boat.

From now on there are very few photographs, as the mechanics of getting the camera /iphone out of my rucksack where they nestle in their plastic protective coverings is too much for me. It is now raining quite heavily as I head up on a forest path which soon turns into a narrow, overgrown, muddy and very steep one. I trudge up and down fighting off dripping ferns, brambles and stinging nettles which hem me in on both sides – images of Herzog’s “Fitzcarraldo” come to mind, the one step forward, two steps back syndrome.

I then get a bit lost and head down through a field to try and get back on the path. Through all this I have not met a single walker, I have only cows for company who gaze impassively at my painful attempts to get the second leg over a barbed wire fence and are suitably  unimpressed by my groans when I rip my waterproof trousers. So on I go, up the steepest steps cut into the sticky red earth.

Rounding a corner I am brought up short by the sight of a young couple in school uniform canoodling on a step in the middle of the path. The boy has the most beautiful blonde curls and the girl is pretty with long dark hair – I feel like I’ve walked into the set of Midsummer Night’s Dream. Embarrassed, I muster up a good afternoon, encouraged by a sign of human life in the jungle. Eventually, the path widens and gets easier, this is proper woodland and I start to relax – I do however, have very little idea of where I am – all I know is that I am exhausted and it is time to stop.

I reach a signpost which leads one way to Babbacombe Beach and the other to the Valley of Rocks. I am stuck now between a rock and a hard place (if you’ll excuse the pun) as I know I don’t want to carry on to Babbacombe but I’ve no idea what’s in the other direction – my iPhone has no 3G so I can’t check my position. Reminding myself that I am not in the middle of the Sahara with no water I set off for the valley which proves to be a short walk, up onto a narrow tarmac road leading to Watcombe – I will return tomorrow.