The first bus of the morning to Llanybri takes me to the crossroads under the stern gaze of a massive electricity pylon. 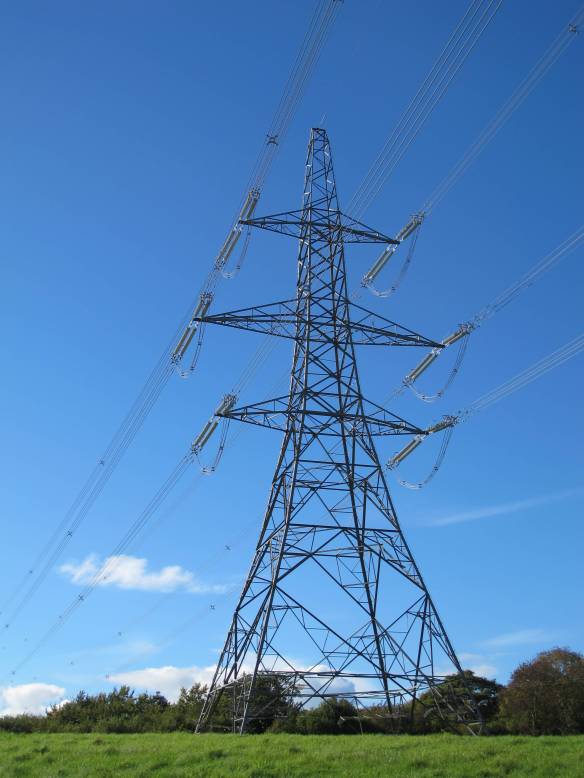 I have become more interested in these structures ever since reading Alain de Botton’s book entitled “The Pleasures and Sorrows of Work” and its section on what he sees as their inherent glamour and drama – “In different species, I noted varieties of modesty or arrogance, honesty or shiftiness, and in one 150-kilovolt type in ubiquitous use in southern Finland I even detected a coquettish sexuality in the way the central mast held out a delicate hand to its conductor wire”. Wonderful……

Down the hill I go, to then follow the east bank of the River Taff northwards, passing through a farmyard – silent apart from the alarm calls of a flock of geese and over flat soggy ground into a stretch of woodland. 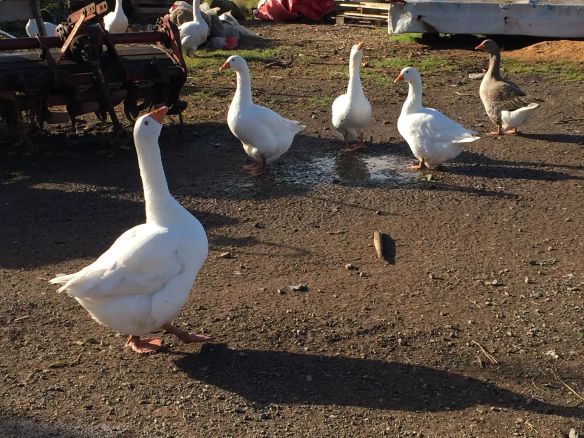 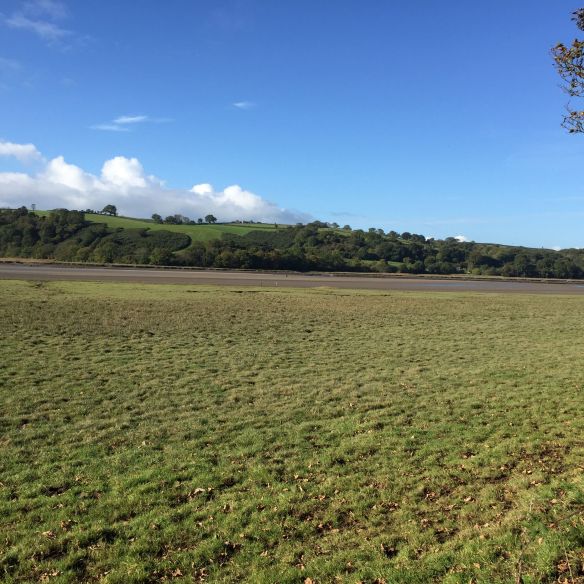 The path through the wood is very overgrown, the stiles strangled by ivy and brambles. 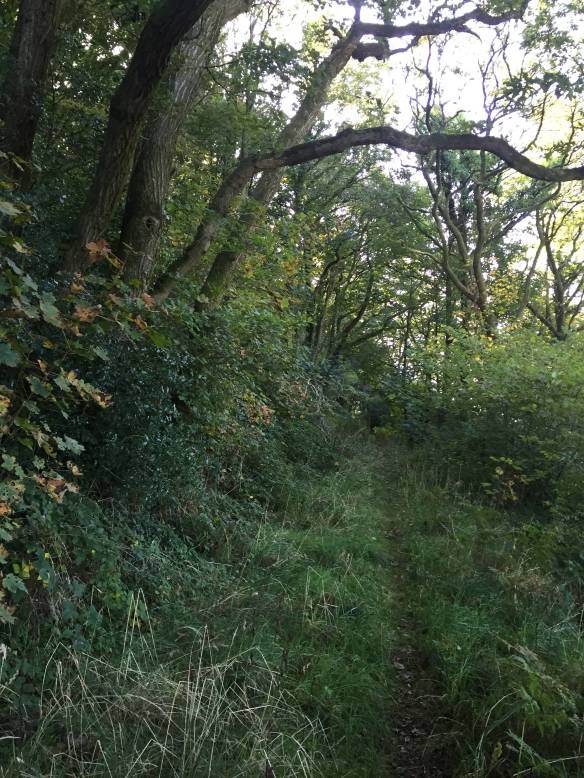 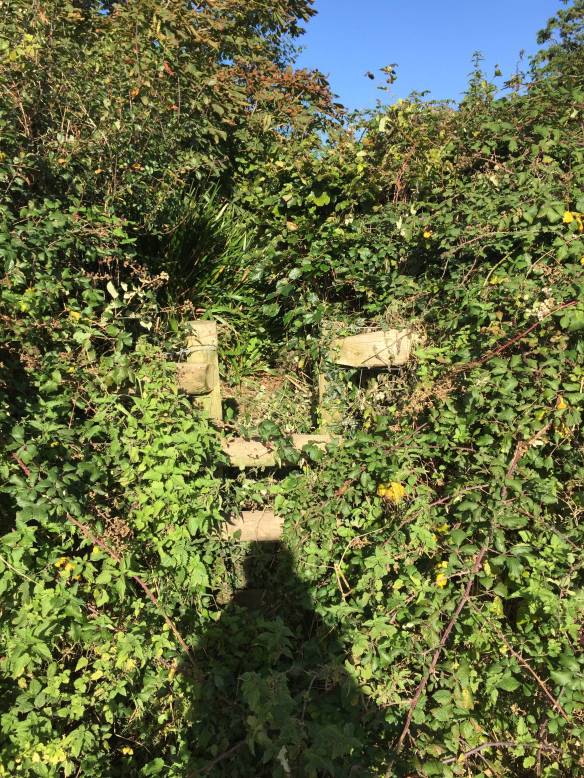 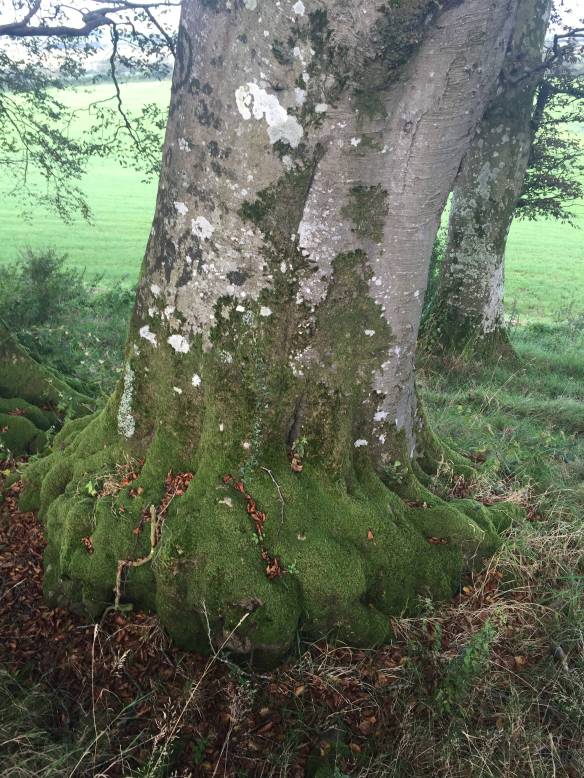 Where I’m heading is for a few buildings and church ruins labelled as Pilgrims Rest on the map. It is encouraging to know that I am following in the footsteps of pilgrims on their way to St. Davids, although at that time it was possible to cross the estuary on foot or horseback. When I arrive however, the church has been made into a home and all there is to see are ugly farm buildings. A little disillusioned I follow the coastal signs across fields and meadows until I join a minor road. 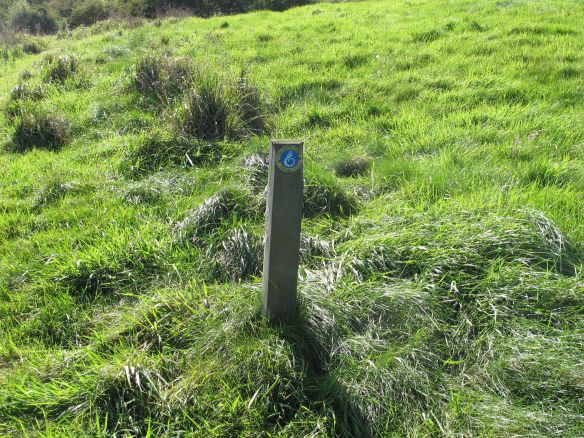 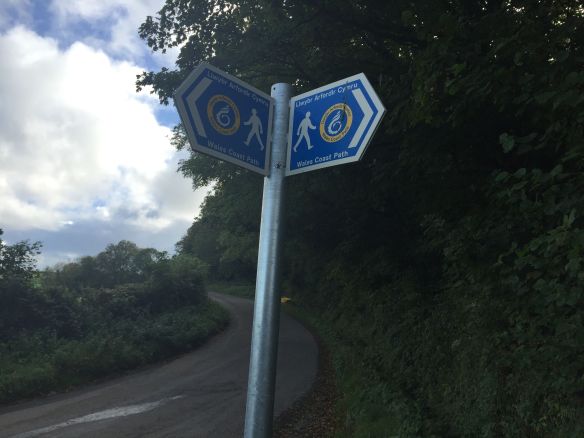 A mile or two up the road a large hedge cutter is intent on a short back and sides – the noise of the engine is deafening. 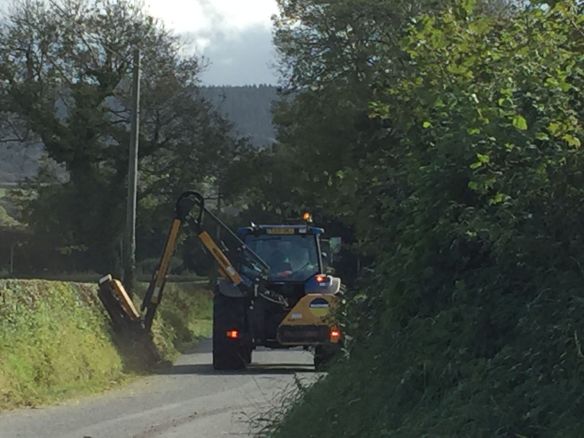 Coming to a crossroads I decide not to follow the coastal path but take a short cut  following another footpath sign across some fields. I can see it on the map but it takes a little while to find it, the sign is hidden in the hedge and the stile looks like no-one’s used it for a long time. 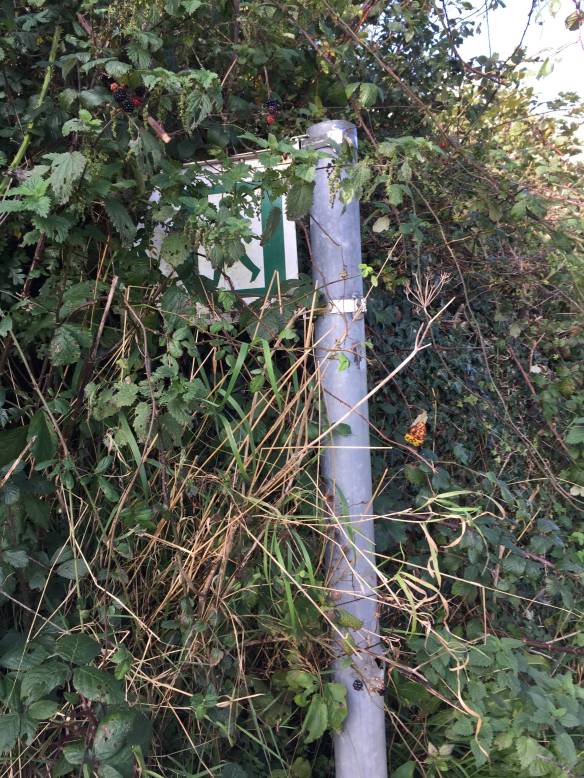 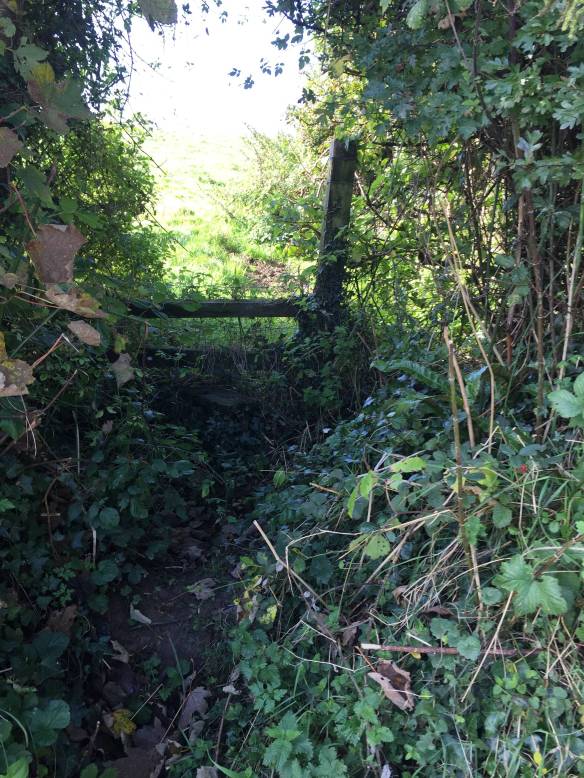 Jumping down from the stile I find myself in deep mud, churned up by the hooves of cows. I wonder whether I should turn back but decide to carry on.

At one point the sign points off to the left down a track but I ignore it and carry on into the next field where I am faced with an electric fence barring my way. By this time I have walked so far it would be foolish to turn back so I take off my rucksack, throw it over the fence and then get down to crawl under the wire – in the mud. On I go through a field of disinterested horses and down through another sea of mud where I can now see the sign for the coast path. 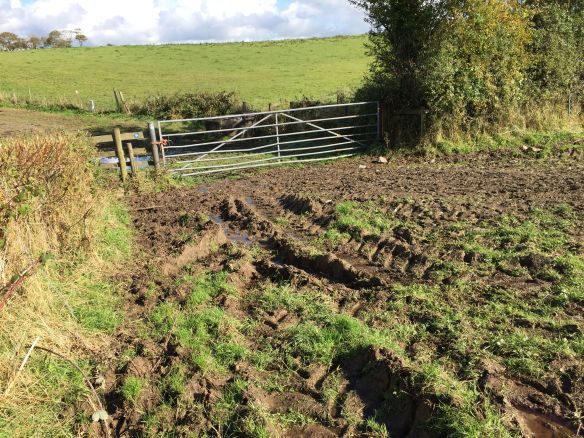 A little later I come out onto a concrete path under the gaze of a herd of cows and calves who are also having problems with the mud. 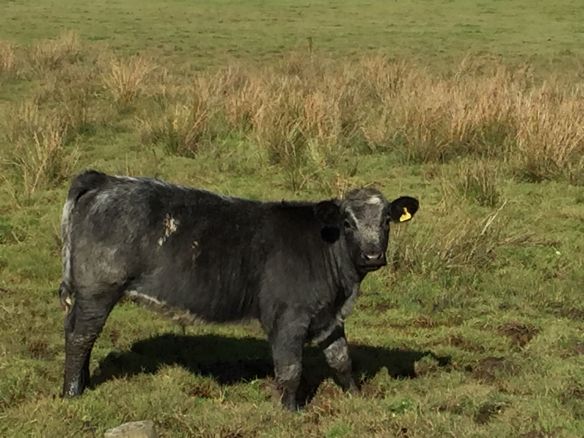 I am now approaching St. Clears, I join the road over the river and head into town. I am  very hungry.

St. Clears is basically one street with two or three cafes and none of them look inviting. I take a few photographs while making up my mind. 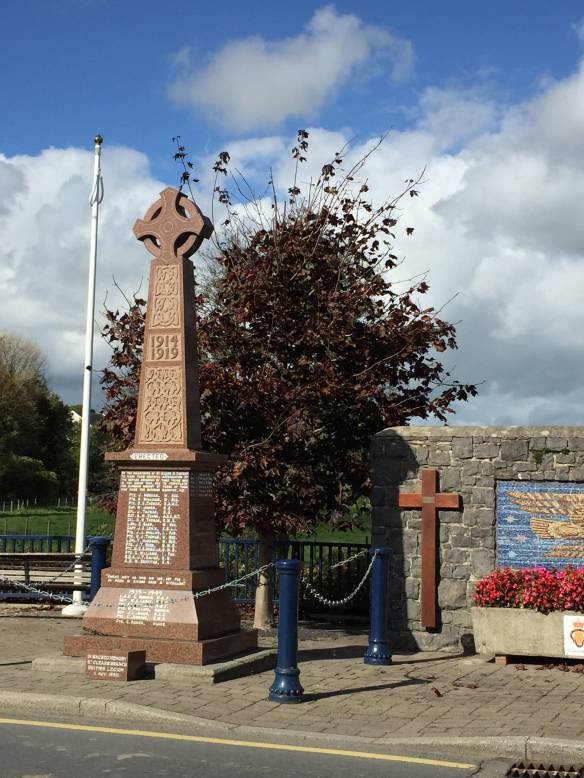 This strange triptych is in memory of the Rebecca Riots of 1839 -1843 when farmers,  struggling with high rents and poor harvests, came out in protest against local business men who had set up unjustly priced tollgates in the area. Dressed as women and with blackened faces (in an attempt to disguise themselves) they destroyed over a hundred of these gates over the years. The name Rebecca is thought to have come from a passage in the Bible where Rebecca talks of the need to ‘possess the gate of those who hate them’ (Genesis XX1V, Verse 60). 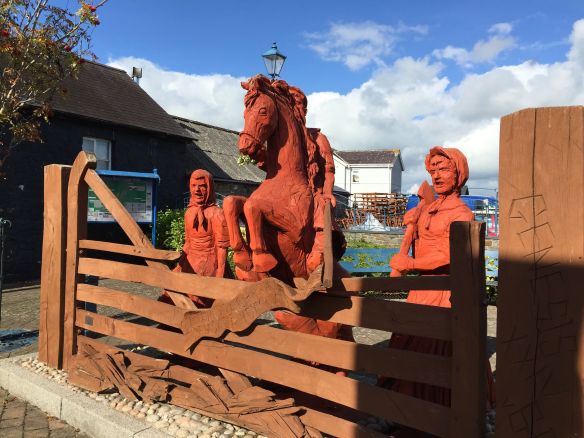 Eventually I plumb for the local arts and crafts centre and resisting the urge to buy yet more clothes for my granddaughter I settle down to a tomato sandwich and a cake. The sandwich is a great disappointment – three slices of tasteless tomato in white sliced bread, smeared with a thin layer of margarine……sigh.

Anyway, from now on it is tarmac all the way on the A4066. There is fortunately not a lot of traffic but it is still a relentless trudge down the long and winding road. Eventually I come to the turn off which takes me out to the river again (on the opposite side) – I am nearly there.

A beautiful lane, lined with young ash trees slopes gently down to the river – the colour of the soil is African. I meet a few dog walkers on the way down. 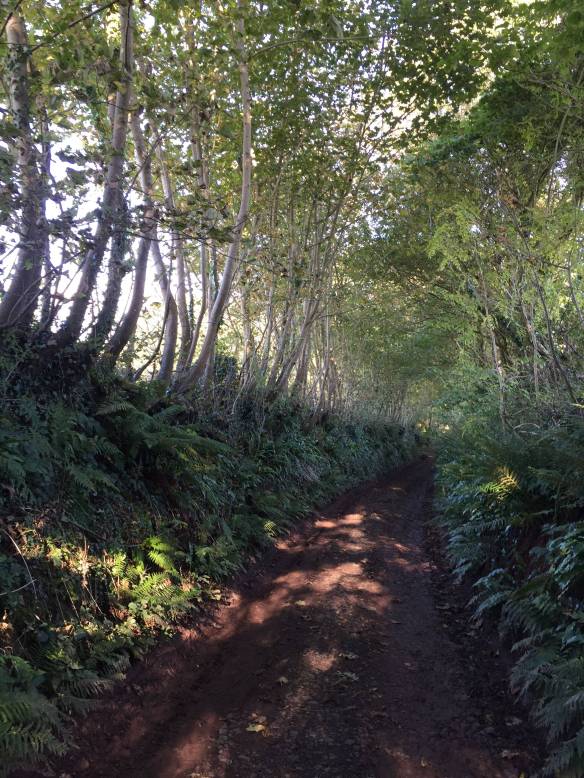 …………..and at one point I walk past a lovely homestead with its thriving kitchen garden and through the trees to the left of me three pure white ducks waddle across what must be  a purpose built walkway. 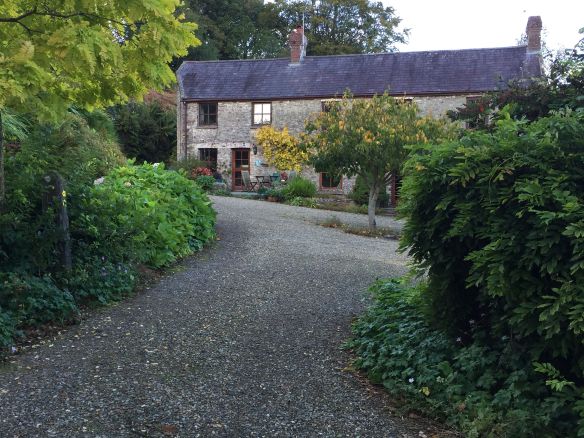 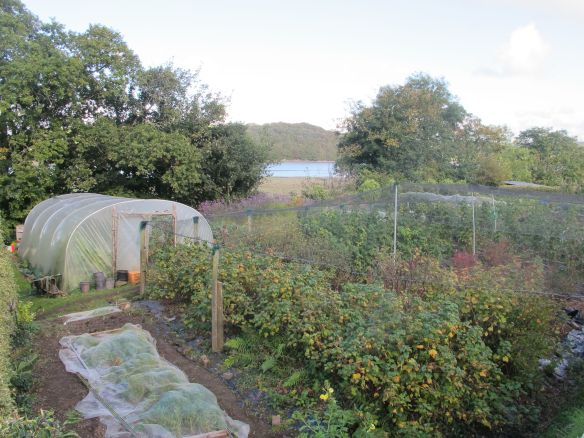 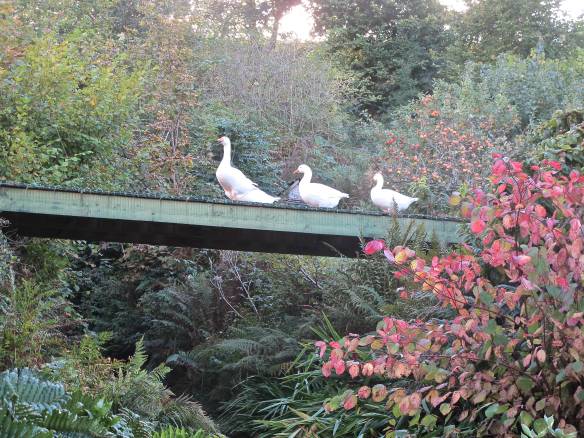 I then walk through a cool bright wood, over a meadow and down into Laugharne. 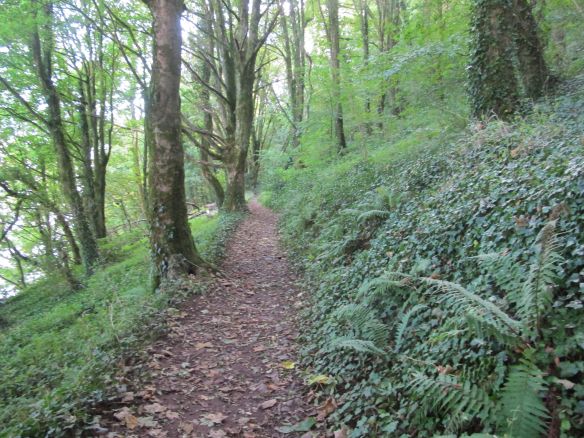 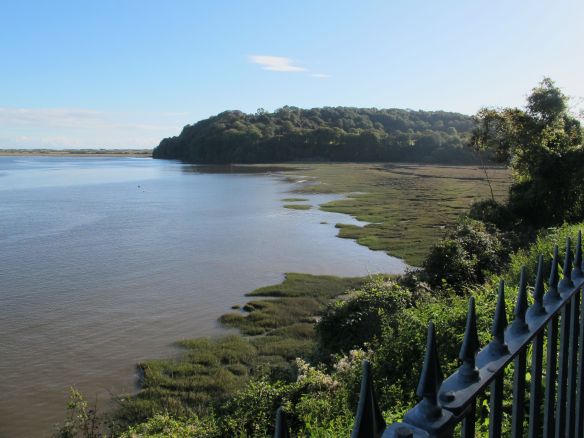 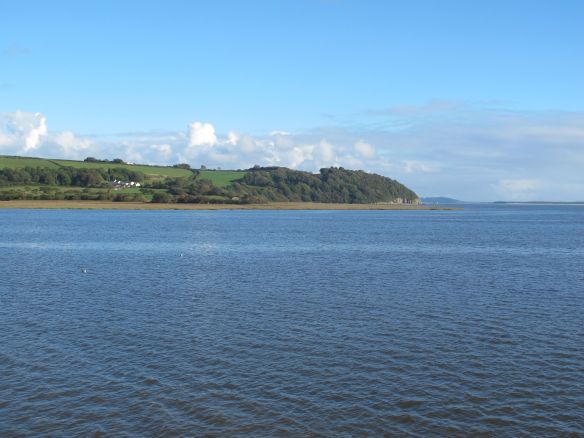 I am so taken by the views of where I have walked from, that I walk right past the Boathouse where Dylan Thomas lived with his family for the last four years of his life. It is tucked into the cliff and after retracing my steps I take the stairs down to have a look. 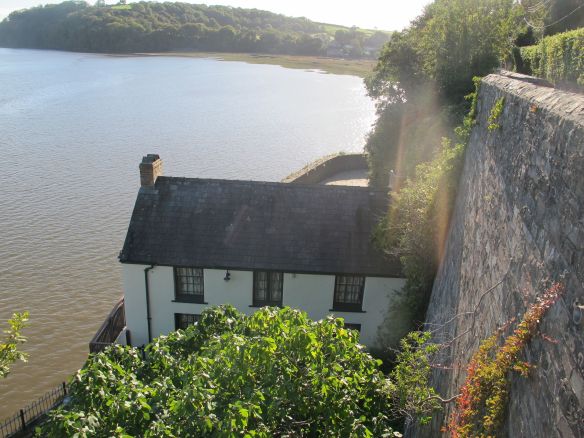 I don’t stay long as I am worried I will miss the last bus back to Carmarthen but I will be back again for my next leg of my journey. Further down the path is the shed where Wales’s most famous poet and playwright did most of his writing – it has a perfect view out over the estuary from its back window but I can’t explore further as it is being repainted. 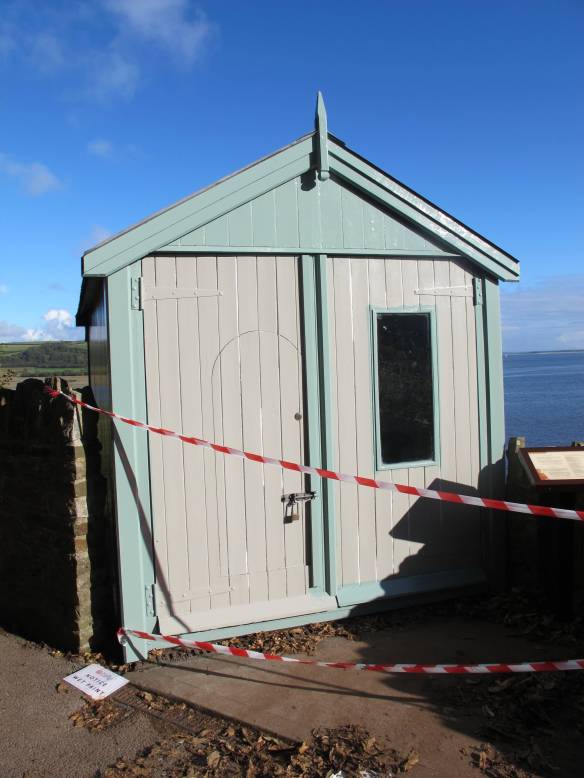 I sit in Browns Hotel, one of his regular watering holes, and some of my favourite lines of his come to mind. It is an extract from “A Child’s Christmas in Wales”.

“She looked at the three tall firemen in their shining helmets, standing among the smoke and cinders and dissolving snowballs, and she said, “Would you like anything to read?”