Owing to the complications of practically non-existent public transport and the dearth of reasonably priced Bnbs on the coast, I will first be walking east and then west today. I cross the road from Trewithian Farm and after a short walk on the road I set out east on the coast path.

It is early and very misty and I can barely make out the shape of Nare Head in the distance. I walk quickly, aware of the fact that I have a lot of ground to cover if I am to reach Falmouth today, particularly because I have to factor in the timetables of two ferries. To the right the sea is very still as I walk through drifts of wild spring flowers – daisies, harebells, dandelions, celandines, primroses, bluebells and pink campion (thank you Sharon). At one point the path turns right and upwards past what looks like an out of season hotel and then continues on the road, soon dipping down to Pendower Beach.

On the way down I pass another group of shuttered buildings so I ask two dog walkers if they know why. I learn that the building in the photo below used to be a hotel doing great business in the summer until the owners decided to sell up. It was then bought by a city gent with ambitious plans to knock it down and build a MUCH BIGGER hotel but the locals objected – this was 8-10 years ago and it has been empty since. This story reminds me of the building opposite our house which has stood empty for more than 18 years due to a family feud – such a shame.

I skirt Pendower Beach, climb up a few steps and carry on across the top of the cliff.

The next hotel I come to is very much alive – the Nare Hotel overlooking Carne Beach – it looks nice but I can’t afford the time for a cup of tea.

I am now getting close to Nare Head and making good time but the amount of screeching and squawking which reaches my ears stops me in my tracks. It is coming from Gull Island which sits just off the headland – hence its name.

Soon I can see the roofs of Portloe peeking up out of the rocky landscape – I have made it in time to meet my taxi which will take me back to where I started 3 hours ago – I will then start walking west.

Now walking with the sea on my left I reach Porthbean Beach where my boots touch sand briefly but are then directed up the cliff.

From here I follow a narrow winding path which opens out onto a flat broad stretch of land and a look out post complete with coastguard.

Beyond Porthkurnick Beach I can now see Portscatho in the distance and my mind turns to lunch.

On reaching the village I walk down to the harbour and find a pit stop with sausage rolls and a tray of “Pata de Nata” (Cornwall has come a long way). The coffee is good but the whole experience is somewhat marred by a disturbingly loud and persistent noise coming from a generator powering an algae removal machine. The man behind the counter explains that this has to be done because STUPID PEOPLE cannot read the notices that tell them not to walk on the slipway and then do so and have accidents. His venom has such force that I feel very happy I am not one of these people.

Up on the cliff again I check my watch, worried that I am not going to make the last ferry from St. Anthony’s Head to St. Mawes – missing it would be a very long walk back with no guarantee of a room at the inn at the end of it. I quicken my pace, stopping briefly to investigate a strange wooden pole standing on its own.

The plaque underneath tells me that it is a Wreck Pole erected by the coastguard services and constructed to look like a ship’s mast. It was once used in training exercises where a rocket and line would be fired from a ship and be attached to the pole. From there a breeches buoy would be used to practise winching people out of sinking ships. 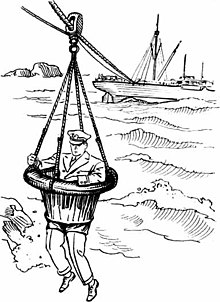 I hurry past through swathes of pretty thrift (thank you Helen)……………

………..until I reach the “cairn” of St. Anthony Head. By now I am very hot and bothered – it is getting late and I still have about an hour’s walk up the estuary to a place called Place (yes really) where I can get the ferry. I march on, which is something I don’t like to do,  past some enchanting little coves which I would have liked to have stopped to enjoy – but not today.

Eventually I come to a sign directing me to the ferry and a sweet little church with its own medieval coffin, discovered during recent excavations – it is lined with thick moss and looks very comfortable.

Just around the corner is the sign for the ferry but I am still not in the right place! Where I’m standing is the high water landing – I need to walk another half a mile to the low water  slipway (sigh).

The path takes me upwards and around a very grand house and gardens and eventually to a break in the trees with steps leading down to a pontoon. There is a sign at the top which confuses me – is the last ferry 16.45 or 17.45? I ring the mobile number and get no reply and in a slight panic ring the office number where I eventually get through to a gentleman who assures me that the ferry is on its way but that I am still not standing in the right place! I am then directed right over some rocks and down a narrow, very slippery slipway covered in algae (am I now one of those STUPID PEOPLE and is that why its called a slipway I wonder?)

I clamber aboard and sit back and enjoy the view. St. Mawes looks lovely and I find myself wishing I had planned to stay here especially as by now I am really tired.

The Tamar Belle sails me past the warships in Falmouth Docks – I am really looking forward to supper and bed.