When Cornish weather men say low cloud they must mean drizzle – grey, persistent drizzle, the kind you get in my part of Wales, the slow but steady process from a bit damp to sodden. Head down and walking away from Praa Sands, my mind returns to such a day when I was 11 years old – leading not riding my horse because he had just been shod and had started to limp. Murmuring encouragements in Dandy’s ear with the occasional hymn thrown in, I squelched my way through five miles of country lane and rough muddy ground. My riding mac gave up, my clothes and boots soon drenched but when I think about it I don’t believe I was fed up – I just resigned myself to my fate.

So, here I am facing the weather, not daring to get the camera out, just a quick swipe of the iPhone will have to do – and even in the rain, the colours are beautiful. 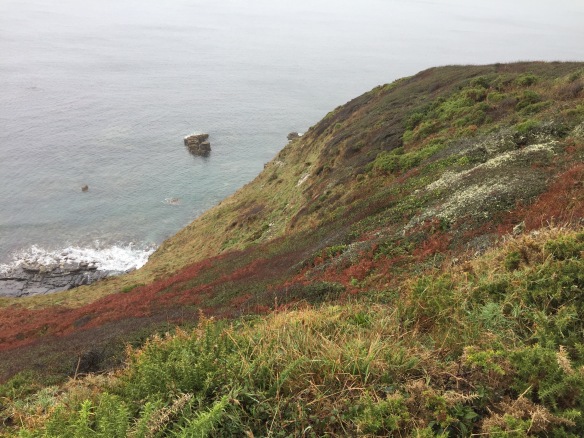 Eyes down I follow the narrow path across the cliffs until I reach the charming cluster of cottages which circle Prussia Cove. The jewel in the crown of this exceptionally beautiful cove is a grand grey stone house which looks like it’s been built into the granite promontory on which it stands. I cannot get a good photo of it in the rain but I later find out that it was built in 1903 and is listed – I catch a glimpse of heavy wooden doors, leaded windows and slate roofs. Rounding a corner I bump into a distinguished looking woman who in response to my enquiries tells me that the house is a holiday let – as most of the other houses in the cove are – and is being used at the moment for an international musicians seminar to prepare for a series of concerts held in churches all over Cornwall.

This is a picture of the other side of the cove and what I found buried in the ground on the headland – no idea. 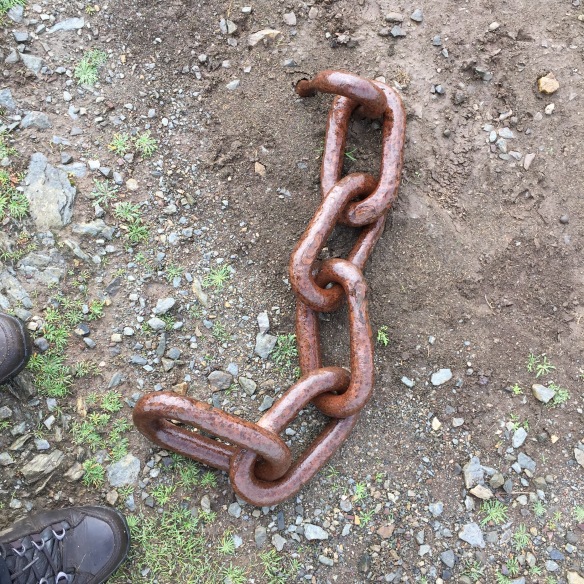 I have now reached Cudden Point and a little later the vague outline of St Michael’s Mount can be seen, rising out of the mist.

Soon the path starts to dip downwards through a stretch of woodland – it is very peaceful and I fall into that familiar state of calm that I love so much about long distance walking. So much so that I am shocked when the path suddenly leads to nowhere but some steps  leading to a beach with a haphazard collection of large boulders. Confused I make my way back about 50 yards to see if I have missed any signs but no, this is the way.

Gingerly, I make my way across the slippery rocks and clamber up onto the path at the other end. Looking at the OS map later I see that this area is bizarrely named Little London.

I am now nearing the outskirts of Marazion, from which I get a slightly better picture of the Mount – I am by now very wet and in need of a cup of tea.

Coming out of the teashop I find myself weaving through large groups of tourists, looking a little forlorn but gamely taking on the causeway out to St. Michael’s Mount. From here it looks like I can walk along the beach all the way to Penzance, but a local tells me I’ll have to stop at Long Rock.

A group of horse riders are gathered on the road and slowly make their way down to the beach. Judging by the body language of most of the riders I somehow think there’ll be no wild galloping with wind in your hair performance today. I myself have only done it a few times, on a pony trekking holiday on a small island off the coast of Denmark – but you never forget it.

By now the weather has cheered up a bit and it doesn’t take long to walk through Penzance  and on to Newlyn where, to honour lives lost, an impressive lifesize bronze statue of a fisherman waits for his boat to come in to port. 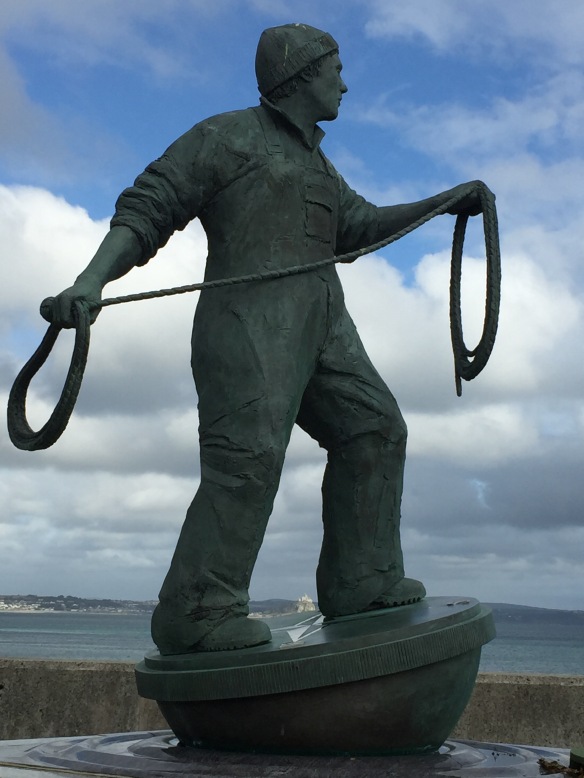 Newlyn is where I will be spending the night so after lightening my load in my Bnb I set off to walk to Mousehole where I know I can get a bus back.

On the way out of town I walk past yet more eccentric garden sculpture that Cornwall seems to love.

It does not take long to walk to Mousehole ( pronounced Mozul) and the sun has come out at last.

I find myself a pub with fish and chips and my favourite local ale – it looks like it’s going to be a better day tomorrow.