Leaving the car at the Beach Hotel we set off for the short walk to Bude across the top of the cliffs. It is a beautiful morning, the bright sunshine lighting up the yellow sandstone  cliffs.

The path runs parallel to the road almost all the way but there is not a lot of traffic – we walk at an easy pace over the springy turf.

An hour later Bude comes into view – the town is overlooked by a pretty octagonal tower which some say was a refuge for coastguards and others that it was built for its ornamental value – a folly.

Damian does love a photo…..

Down the hill into Bude Haven the River Neet separates us from the centre of town but further up we find a bridge. The town, which is the transport and commercial hub for this area of North Cornwall is quite attractive but like a lot of towns in this part of the country I am glad I’m not walking through it in high summer.

It is now mid morning but we have plenty of time to collect our car , dump our luggage in the hotel in Bude and drive north to the hamlet of Morwenstow – the plan is to leave the car there and walk back to Bude. The logistics of these walks beggars belief sometimes.

We arrive in Morwenstow, leave the car in the car park of the 13th century Bush Inn (where we will be staying tomorrow night) and set off down the road, past the church and onto the coast path.

After crossing the small stream known as The Tidna I look up from my feet to see the outlines of a string of satellite dishes on the horizon – the path will take us past these later on. But first we must negotiate a series of coombes involving a steep, often perilous drop down a narrow path, sometimes stepped but not always, followed by a back breaking climb to regain the lost height.

Previously used by the RAF during the second world war the site was later redeveloped as an Anglo/American Satellite station. The antennae are generally orientated towards satellites of the INTELSAT, Intersputnik, and INMARSAT communications networks over the Atlantic Ocean, Africa, and the Indian Ocean, as well as towards the Middle East and mainland Europe. And they’re all eavesdropping. The area is protected by two tall parallel metal fences with a “no man’s land” of a couple of metres in between. At regular intervals a string of close circuit cameras on tall posts stare blankly downwards. Someone means business… 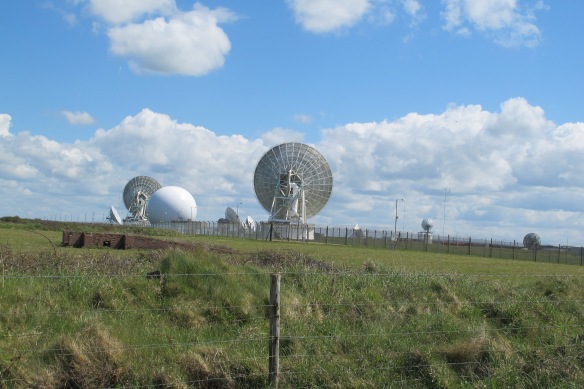 It is very quiet….

We have reached Steeple Point which, so we’ve been told, is the last leg of this roller coaster ride. From here it is supposed to be easier. 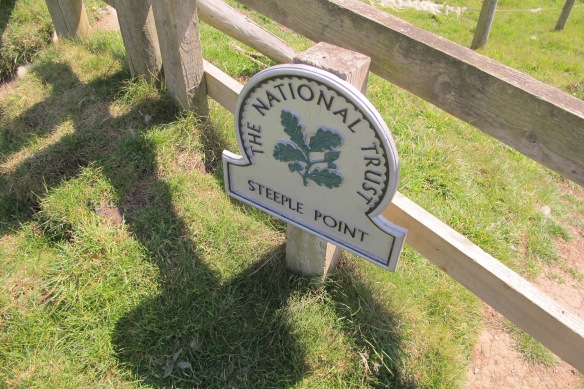 There is however one last slide down into Duckpool.

This is the path – with a very steep drop down to the beach. I am so glad I have my walking pole. Damian scorns them – instead he’s often seen frantically waving his arms around as if he’s swatting a persistent fly, in order to maintain his balance.

And yes from here the walking is much easier across open heath and fields and I have time to look down at the sea. These sharp slabs of black rock jutting out to sea make me think of how easy a ship could come to grief on this treacherous coastline.

Not far to Sandymouth now where there is road access and a cafe – weather permitting, which of course it is. 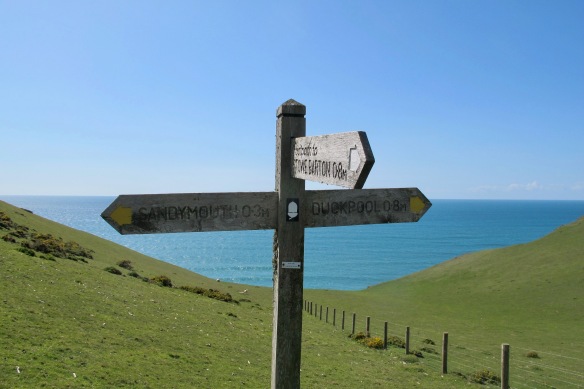 The cafe is very busy but we top up on tea and biscuits and watch people trying to control their dogs and children.

Just before Bude this wonderful bench presents itself. I don’t know what kind of wood it’s made of but it’s solid and what wise words! Go with the flow….. 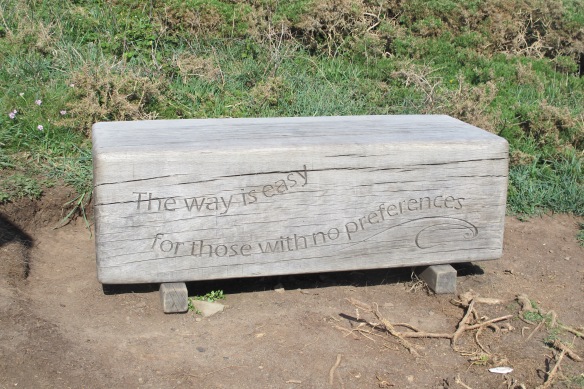 Just outside Bude, on the cliffs overlooking Summerleaze Beach, is a wonderful surprise – Bude Sea Pool. Built in the 1930s to provide safe bathing in sea water, but away from the dangerous Atlantic currents in the bay, the pool is part-natural, and partially man-made. It is tidal, topped up at high tide by the Atlantic Ocean – and it’s free. 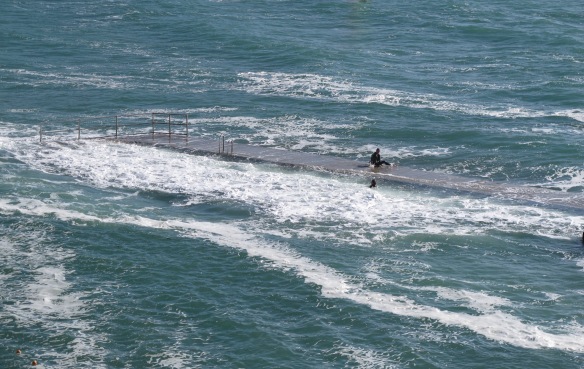 In the bay the surfers are out. 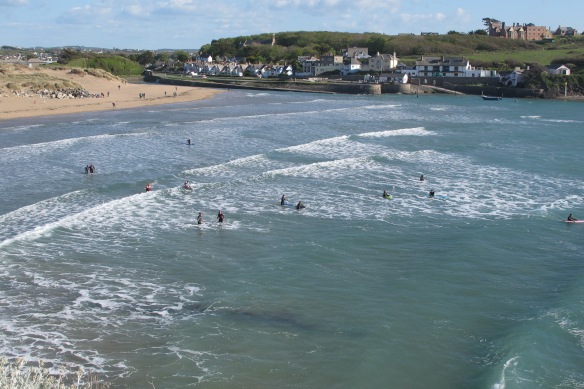 We walk round the back of the beach to our accommodation – tired but satisfied.

3 thoughts on “Widemouth Bay to Bude and Morwentstow to Bude 4.5.19”