Clovelly has worked its charm on me and I cannot stop taking pictures. 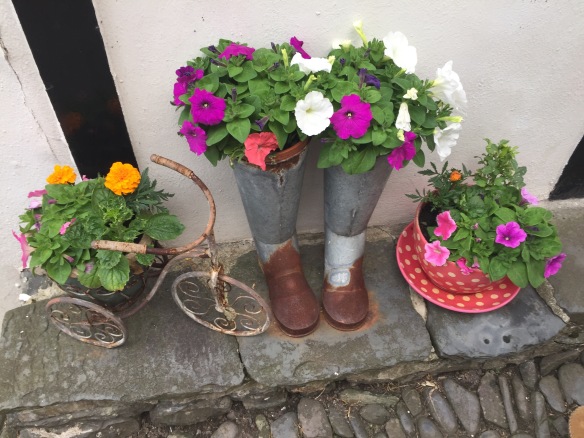 But it’s time to move on – down a wide leafy lane which skirts Clovelly Court Gardens and leads into woodland running parallel to the coast. Turning a corner we come across a beautiful wooden shelter beside the path. A place to rest. 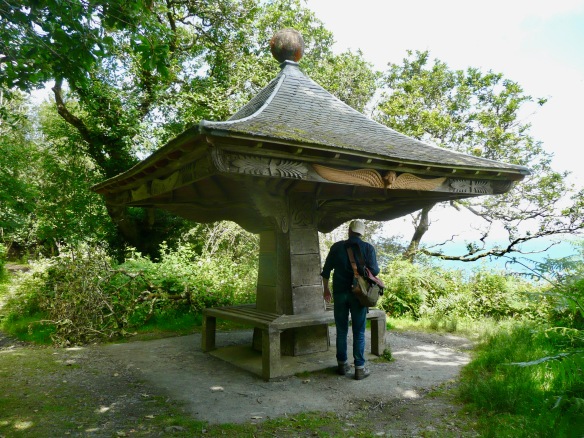 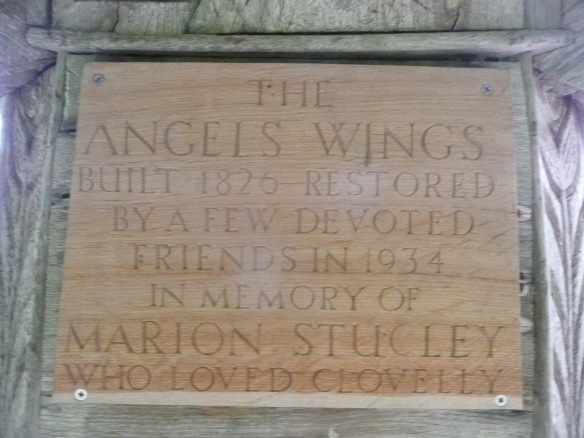 The path continues through the woods until we come to an ambiguous sign which could either take us straight on or sharp left. We deliberate, the map is not helpful so we decide to carry straight on. This turns out to be the wrong decision but we are then pleasantly surprised when we arrive at a small wooden church tucked into the cliff with a stunning view over the valley and cliffs beyond. It is very quiet…..

Carved into the lintel of the door is this inscription “non fatuum huc persecutus” which translates as “it is no will o’ the wisp that I have followed here”. In folklore a will-o’-the-wisp, is an atmospheric ghost light seen by travellers at night, especially over bogs, swamps or marshes. The phenomenon is said to mislead travellers by resembling a flickering lamp or lantern. In literature, will-o’-the-wisp sometimes has a metaphorical meaning, e.g. describing a hope or goal that leads one on but is impossible to reach, or something one finds sinister and confounding. I take the inscription to mean that even though we took the wrong turning we were not misled to this wonderful place for a spot of soul searching.

Retracing our steps the path takes us down into a deep wooded valley and then up and out into the open onto Windbury Hill, from where we can see Blackchurch Rock – a sea stack in the form of an arch perched at the end of the cove.

From here the path continues to follow the coast in and out of woodland for miles – it’s a trek, uneventful but exhilarating. That is all about to change. Time for a photo in the daisies.

Round about West Titchberry we are directed through a field where Damian spies a short cut down a steep bank. I protest but am over won, and anyway it doesn’t look too dangerous. Damian goes first and as I am slowly picking my way down the slope he kindly offers a hand – this was a big mistake. I realise afterwards that taking his hand must have upset my precarious sense of balance. I stumble, try to right myself and then slowly but inevitably tumble head first into a patch of brambles and nettles! Ow!

Fortunately I suffer nothing more serious than scratches and a bruised knee which only stiffens up later in the evening – the curious bend of my arm is genetic. Onwards!

By this time we are very hungry and desperately looking for a nice spot to eat our sandwiches. Round a corner we spy a welcoming bench with a fabulous view over the sea but just as we head towards it another couple appear and get to it first – Damn!

Onwards we plod in the hot midday sun……..maybe there will be a bench up by the satellite? 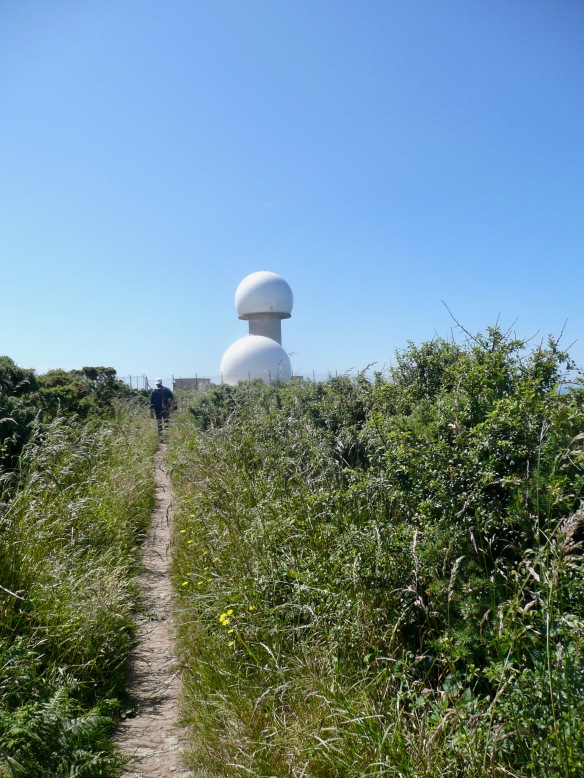 Hartland Point is where we stop – to clean my wounds, gobble sandwiches and stretch out in the sun. The lighthouse on the other side of this promontory is closed to the public today so after a rest we carry on. Walking up a concrete path to the top of the next cliff I become aware of a very brightly coloured pigeon (or rock dove) that decides to walk along beside us. It seems very at ease in such close proximity to humans and sure enough it has a ring around its leg. Perhaps a carrier pigeon. It then decides to become our leader, walking  just a few paces in front and showing no fear or inclination to fly off. At some point it is so close that I cannot resist leaning down to stroke the iridescent green and purple neck feathers, but that is too close and it flies off.

Our hotel for the night is at Hartland Quay, where we set off a few weeks ago to walk in the other direction to Morwenstow. The hotel, as I remember it then, was a pale yellow colour but it has now had a face-lift. New bay windows, grey stone walls and wooden shutters have been added – but all FAKE. The hotel is being used as a film set for a new version of Rebecca by Daphne du Marier. This “stone” boathouse, built into the cliff is (as one of the set designers tells us) “nothing but cardboard and glue” . A slight exaggeration but astounding nevertheless. We are told the the boathouse is destined to be burnt down in the film. 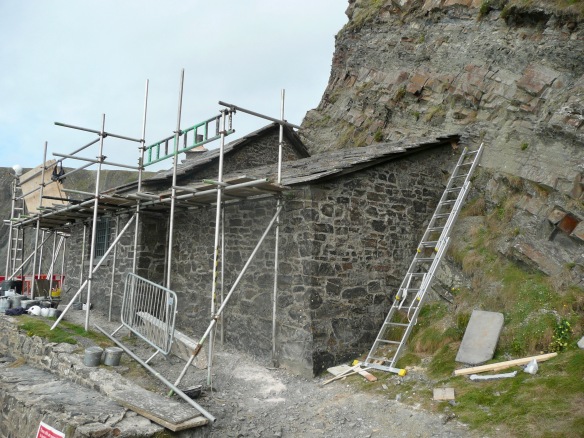 After the usual well earned pint of cold beer I am sitting reading in our hotel bedroom with the window wide open when I’m startled by a scrambled clatter from the window. Looking up I see a pigeon on the window sill – about an arm’s length away from me. We sit and stare at each other for a full 3 minutes before I reach out to try and touch its beautiful feathers. It takes off immediately of course – I like to think it is the same pigeon that joined us on the path earlier. 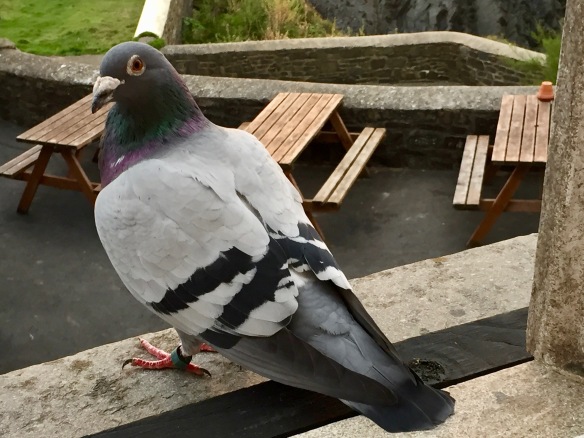