There is no other way to get to the toilets on the pier at Lytham St. Annes than straight through the mayhem of the amusement arcade. I brace myself for the noise and bright lights but at this time in the morning it’s not too bad – I even find myself lingering at the penny drop machine (which is now a 2 pence coin).

Down on the beach a kitesurfer is making the most of the stiff breeze, skimming along on the surface of the water at a cracking pace.

Trucks transporting sand up the beach are perhaps part of a dune management programme although the mounds are full of debris. 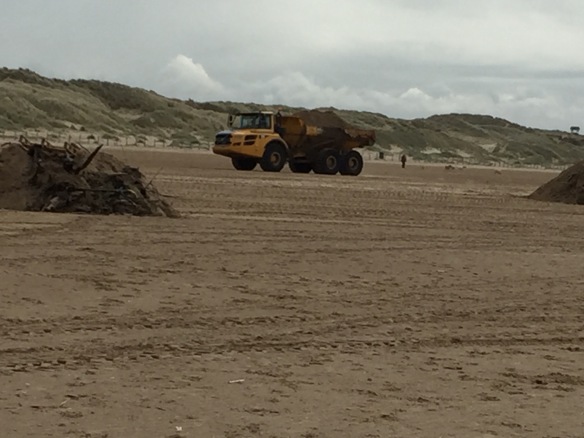 I’m hoping that our walk today will be mostly on sand, as long as it remains firm but as we approach the first signs of Blackpool we decide to move up onto the sea wall to investigate what this iconic seaside resort has to offer.

Quite a lot actually………………………….and all part of a 100 million pound regeneration project that took seven years to complete. 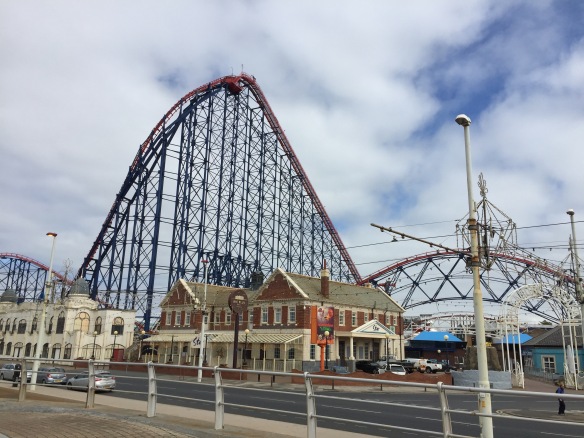 As we pass Blackpool “Pleasure” Beach a chorus of screams goes up from this ride which I’m told is called “The Big One” – the scariest of five other Big Dippers and Rollercoasters. The “beach” is surrounded by residential buildings and I find myself wondering what it must be like to live within earshot of all that terror/ecstasy……….

Up til now the walk into Blackpool has been interesting but we now hit a stretch that is best forgotten – a long strip of gaudy fast food joints, tired amusement arcades and shops selling tacky seaside paraphernalia.

That said our approach to Blackpool Tower is heralded by some strangely attractive pod like structures that sway gently in the wind – another sign of the regeneration of the seafront.

The tower itself is not as impressive as I imagined it would be and seems almost sedate compared to its frenzied neighbours.

In front is the 2,200m2 work of art known as the Comedy Carpet which contains over 160,000 granite letters embedded into concrete and whatever your taste in comedy, it is a remarkable homage to those who have made the nation laugh. We spend a few minutes reading some of the familiar songs, jokes and catchphrases, coined in an age before political correctness – I find myself chuckling guiltily at some of them.

Having past the South and Central Pier we are now nearing the North Pier where we again are treated to more marine sculpture – this one serves as shelter from the wind.

Gradually the shops and entertainment disappear and we are left with a very long featureless concrete path flanked by banks of undulating brown concrete that I’ve only ever seen before in a zoo. 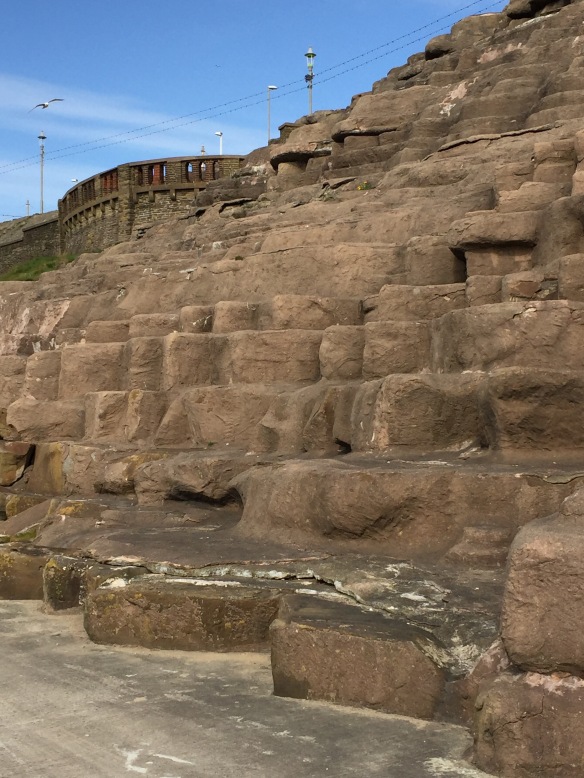 And so we walk, and walk some more until we are forced off the “promenade” onto the other side of the road which is even less interesting.

Eventually we reach Clevelys where things start to look up. There is a lot of regeneration going on with new sea defences in honeycomb concrete and poetic seaside sculpture.

………….and lo and behold down on the beach, is a very intriguing piece of metal sculpture. 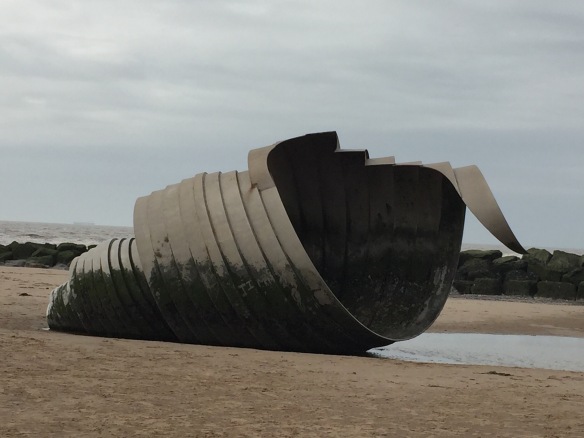 Further research reveals that the sculpture is known as “Mary’s Shell” after the heroine of The Sea Swallow, a book written by children’s author Gareth Thompson. Lines from the book are etched on the inside surface of the shell. The whole structure is rooted into a concrete foundation stone and just about disappears under the surface of the water at high tide.

By now our feet are getting sore and we still have another 3 miles to go – time to take a break on the sand and engage the locals in conversation.

Walking into Fleetwood was not an experience I would like to repeat ………………. 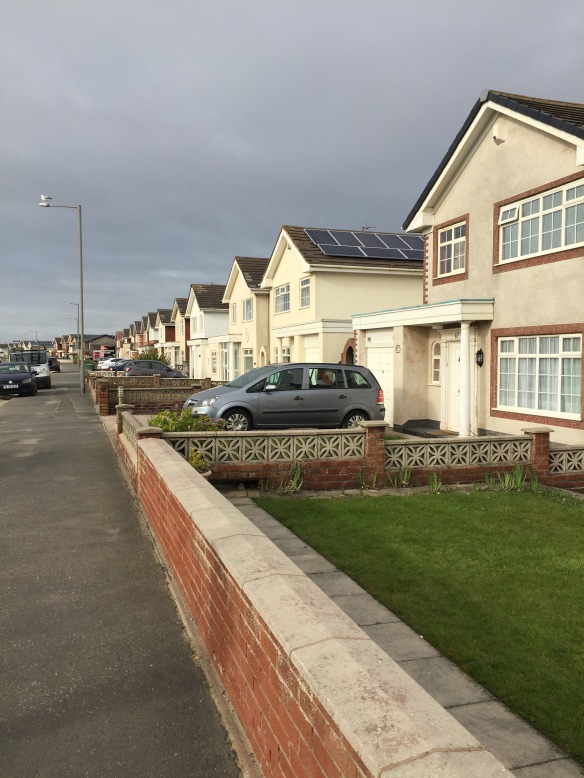 ……but as we approach the small port and the ferry across to Knott End on Sea (this will be another day) the town opens up and reveals an attractive seafront, some pretty landscaped gardens and well maintained art deco buildings.

One of the Fleetwood landmarks is the imposing North Euston Hotel built in the mid 19th century by a local landowner, whose ambition was to provide a resting place for travellers from London to Scotland. As there was no railway through the Lake District at the time, the idea was that passengers would disembark at Fleetwood before taking the boat to Scotland.

Unfortunately, by 1850 a direct line from London to Scotland had been established and the town’s tourist industry gradually declined. It is now a listed building and still used as a hotel. 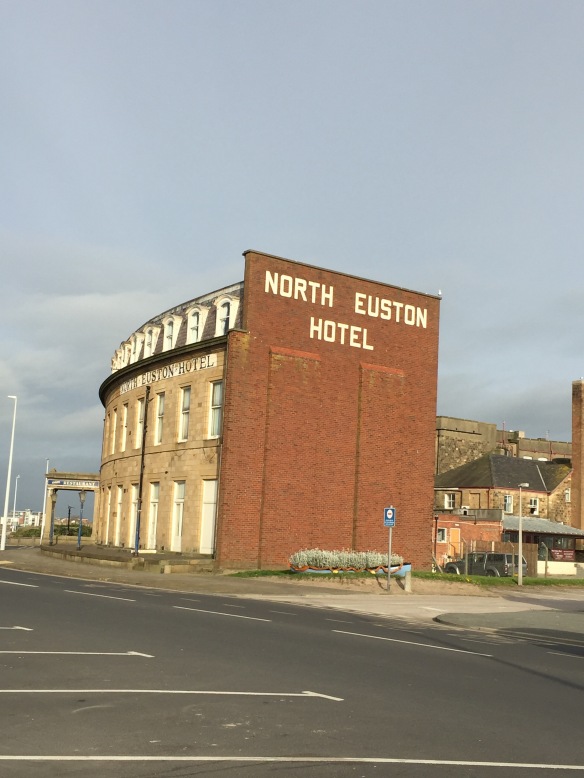 We had to hurry to catch the tram back to Blackpool, otherwise I would have liked to take a look around.

It has been a long but interesting walk – always nice to be pleasantly surprised.